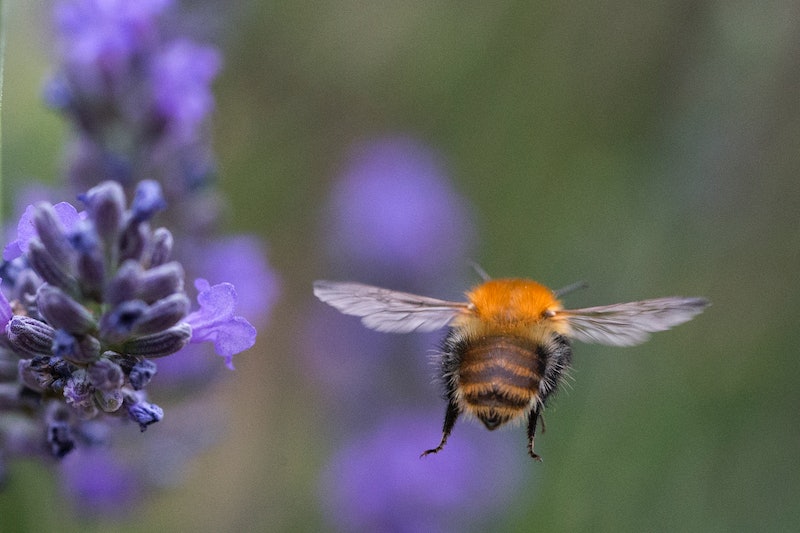 All across the world, bee population decline is increasingly becoming a major problem. Bees may be most familiar to us as the cute, fuzzy creatures who antagonize our summer picnics — but they're also a crucial part of the world's food ecosystem. If you remember your elementary school biology, you know that bees spread pollen and fertilize plants — and scientists have estimated that bee pollination helps one-third of the food you eat come into existence. But over recent years, we've seen bee populations die off at alarming rates, for a variety of reasons: disease, less wild space, pesticides (Northern Ontario just announced a ban on neonicotinoid insecticides to try and boost bee numbers), and something called Colony Collapse Disorder, which causes a hive to literally stop functioning.

The future of honey bees has become so dire that President Obama actually formed a government task force to strategize ways to save the bees. The task force's report, published this May, made it clear that "pollinator conservation is a national responsibility" — so we've all got to pitch in.

Even if you're not a gardener, hate honey or fear stings so badly that you shrink from bees like the plague, you can still take simple action in your daily life to help save the bees. Because even if you don't like bees at your picnic, I can guarantee that you like the way bees help us maintain our agricultural existence.

Every flowering plant placed out on a windowsill helps. Expert bee websites can give you advice on the best bee-attracting flowers for your area and climate, but the golden rule when planting a high-pollination garden is that all the plants should produce lots of nectar and pollen from spring to late summer. But do get some pro advice before you plant, because some very common flowers, like geraniums and fuchsias, actually aren't bee-friendly.

If you have access to open spaces but no green thumb, think about getting a a bee house. Hives aren't the only place where bees live; you can also buy special bee hotels from Amazon and garden sites. They're generally made of wood, and have lots of little holes for solitary bees to chill in. You can't just leave bee houses outside all year, though: they need to be put somewhere dry during winter, or the bees will be seriously unhappy.

Several types of bee, including a few species of bumblebee, don't like bee houses or hives, and prefer to nest underground. If you've noticed bumblebees in your area, you can help them breed by leaving leaving bare spaces in the garden, and leaving small holes unfilled, as well.

August 22 is National Honey Bee Day — so if you're the type who frequents organic farmer's markets, use it as an excuse to strike up a conversation with anybody touting their own hive-fresh honey. Urban beekeeping is now a full-fledged "thing," particularly in New York, so if you do some looking around, you may find some active bee hives (and some fresh honey) closer than you'd expect.

5. Plant Flowers In Your Community Garden

Have a community garden where you grow fruit and veggies? You're a lucky person — now share the wealth, and devote a corner of your space to bee-friendly flowers. It's not a waste of your garden — you can find specially formulated wildflower packets designed to sprout bee-friendly flowers from seed.

Part of the fight to save bees involves encouraging greater public awareness of the issue. If you've got a bee-friendly garden, register it with SHARE, which stands for "Simply Have Areas Reserved for the Environment." Run by the Pollinator Partnership, SHARE maps bee-friendly areas across the globe, helping people not only see how many people are engaged in making space for bees, but how much more space they still need.

If you hate flowers, break out in hives just looking at a picture of pollen and get the heebie-jeebies every time you see an insect, there are still other ways to help the bees. There's still much research to be done into the science behind colony collapse disorder, and a bit of spare cash could help scientists pin down causes and solutions. Think about donating to the International Bee Research Association, the Honey Bee Conservancy, and other bee research organizations at your local university or college.

If you've got a pest problem in your garden, try to find a way to navigate it without using commercial pesticides with known links to bee population decline. There are lots of ideas out there about how to keep your garden healthy and pest-free without chemicals, and while keeping a truly 'green' garden may be more effort-intensive than using pesticides, it's worth it.

Back in February, the Guardian newspaper in the UK unearthed a deliberately suppressed scientific paper that pointed out the the serious health and environmental risks of 31 commercial pesticides. If it had been released, the pesticides would likely now be banned in the European Union — but serious backlash from US lobbyists meant that the paper was buried. The world of pesticide research and activism can be complicated, but putting pressure on local representatives may make a difference. So keep your eyes peeled for new legislation calling for bee-harming pesticide bans, and write and campaign for your congressperson's support.

Bees do so much for us every day, without even knowing it. Isn't it time we gave a little love to the critters who give us all that honey?