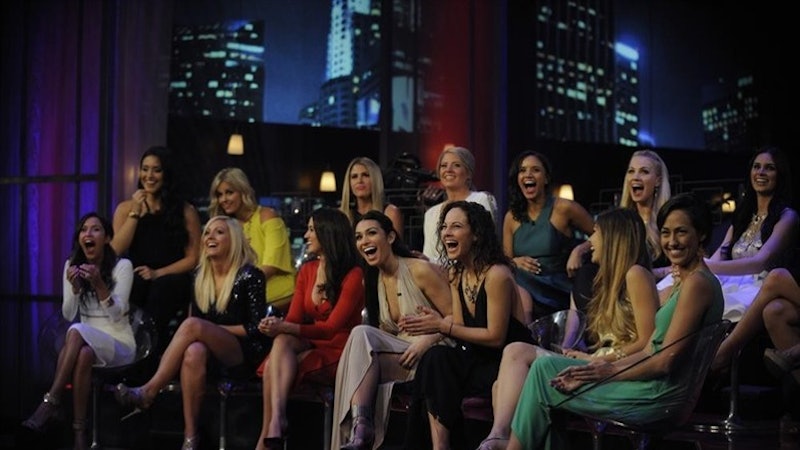 We had an idea of some of the cast members from rumors and live reunion show offers, but nothing was confirmed. Not even Ashley S. was confirmed. But, fear not, because Ashley S. and her onions, will be making their way to Paradise with 8 more women and men, making the cast an awkward 17. Cast members of Bachelor in Paradise range from the most current season of Bachelorette (four men currently on Kaitlyn's season will move on to Paradise) to throwback personalities like Kirk DeWindt from Ali Fedotowsky's season of Bachelorette (who later went on to Bachelor Pad).

Here is what you need to know about our Bachelor in Paradise cast members (of those we know).

You know her. You love her. She made a name for herself for being a little quirky on Chris Soules' season (although she's actually very intelligent and was most likely edited to look a little "off"). Ashley (as seen above) was basically a shoe-in for Bachelor in Paradise.

Dan is from Desiree Hartsock's season of The Bachelorette. You're probably still laughing about Dan splitting his pants during the date on Des' season, and you're not alone. He went home pretty early during Bachelorette Season 9, but let's hope he's going to last a little longer in Paradise (split pants and all).

If you're still laughing at Dan Cox's split pants date, you're probably still cringing at Carly's super-sexual date with Chris Soules' where they had to touch each other all over while "specialists" just casually watched them. Carly, who was majorly vocal during reunions, and Soules' season in general, is going to make a great addition to Bachelor in Paradise.

Juelia was also on Chris Soules' season. She is a single mother, who faced a terrible tragedy when her husband committed suicide in 2013.

Jillian is back (from Chris Soules' season, too) and might be most remembered for that absurd black bar censor on her butt during the season. She wasn't the right match for Chris' "personality" but perhaps something will come from Paradise.

Kirk was on Ali's season of The Bachelorette and is a personal trainer. He was on Bachelor Pad, as well, so he's just making the rounds to each show on the franchise. He lasted a good amount of time on The Bachelorette, but things went south during the hometown dates (two words: taxidermy animals).

Ashley I. (or Lashely, because have you seen her amaze lashes?), from Chris' season, is back and that's amazing news because girlfriend doesn't hold back. She is a freelance journalist who apparently made it out of the Badlands with Kelsey after the dreaded two-on-one date (as Chris flew off in a helicopter).

Jade (a cosmetic "developer") was — is this getting old? — on Chris Soules' season. She made it pretty far, but suddenly Chris had a change of heart when he learned Jade was a "mustang." Whatever, Chris. Maybe someone would love a mustang on the Bachelor of Paradise island.

Tenley was so close to walking away with the final rose on Jake Pavelka's Bachelor season (that honor went to Vienna, and it worked out really well for them...). Tenley also made an appearance on Bachelor Pad, so by the time she gets to Bachelor in Paradise, she'll be an old pro at all of this.

Mikey is also from Desiree's season of The Bachelorette. He owns a CrossFit location in Illinois (see above) and famously got into it with Ben Scott, all while trying to woe Des. It didn't work.

YES. Clare is back. Honestly, Juan Pablo did us Bachelor fans a huge favor by not picking Clare, because that made her available for Bachelor in Paradise last season, and now we get another season with her! TAKE THAT, JP.