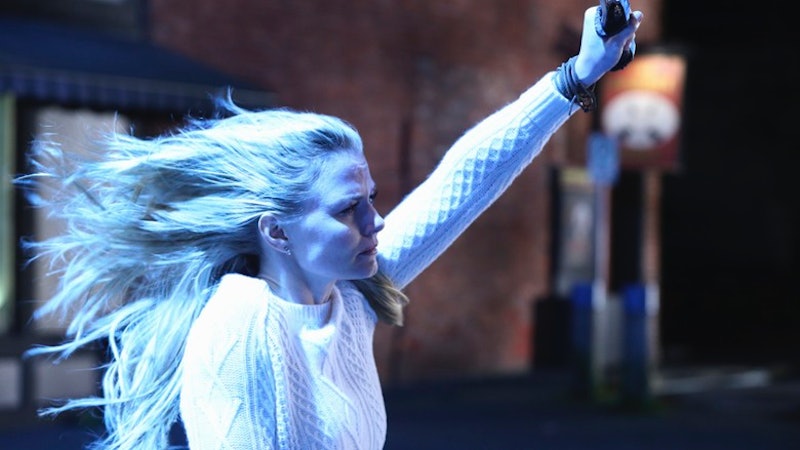 The biggest, most monumental burden Once Upon A Time 's Season 4 finale left us with was Emma as the new Dark One. Sure, they'd been hinting at it for the latter part of the season, and many had already been guessing that Emma was due to go down a dark road, but I think I speak for everyone when I say that I didn't expect things to go down quite like they did. And while no doubt Season 5 will largely focus on the people that love Emma trying their hardest to get her back to her old self, as the Savior, I think we're all getting a little ahead of ourselves about the whole thing.

Hear me out, guys. Yes, I'm aware that tethering the world's darkness to a single being is a bad situation for anyone. Look what it did to Rumpelstiltskin, after all — it feeds on any small amount of doubt you have within you and turns you into an unrecognizable monster sometimes, so it's natural that we're all a little worried about Emma. But do we need to be? This is the Savior we're talking about here, not some random with a weakness for evil and a score to settle. Something tells me that Emma's going to be just fine, so maybe we should all just take a deep breath for a minute.

The Darkness Doesn't Destroy Anyone Right Away

Think back to when Rumpel became the Dark One. Sure, he had magic all of a sudden, but he wasn't all of a sudden some unrecognizable monster. Rumpel became what he eventually was because he LET the Darkness do it to him. He had nothing to hope for, which was perfect for the predicament he found himself in. But beneath it all — all the way to the very end — he still had a heart, and he was still capable of love. Emma's not going to start Season 5 as a total nightmare. Relax.

She's Got A Son To Get Back To

Sure, Henry's got Regina to look after him for now, but he loves and needs BOTH his moms. Emma has dedicated herself to being the best mom she possibly can be since coming back into Henry's life, and he's a motivation for her in every way. No doubt her love for her son will help her fight off the Darkness that tries to overtake her.

Her Family Won't Give Up On Her

Family means lots of different things in Storybrooke, and often it's about more than blood. Emma's family is not just her son and her parents, but it also includes Regina, with whom she's raising Henry, and people like Hook and Ruby, too. They're all going to be fighting for her, supporting her, and looking forward to having her back.

She's The Product Of True Love

Not only is Emma the product of True Love, she's also got Light Magic, and that's not something that will go down without a fight. If anyone is equipped to take on the Darkness, it's Emma. She is more powerful than anyone has ever given her credit for — and far more than even she knows herself. Something tells me she'll realize her true potential in the coming months.

The Darkness Needs Something To Latch Onto

The reason Rumpel was so corrupted by the Dark One wasn't just because the Darkness is that powerful, but because Rumpel didn't know what he was getting into and didn't exactly push back to ensure his own goodness. Emma made the sacrifice she did for Regina out of pure and noble reasons, and that counts for something. So does the fact that she's quintessentially GOOD. The Darkness will certainly have a fight on its hands.

They WILL Find Merlin

The Apprentice said that Merlin's the only one with enough power to banish the Dark One for good, and as we all know, Season 5 will largely be about finding him — a journey that will no doubt be successful given that we know there's an open casting call for the role of Merlin at the moment. Once they find him, he'll probably be able to help, even if he's not the eventual hero.

No One Saves Emma But Herself

She'll obviously need some help because no one can work alone, and it's likely that the people she loves and that love her will have to remind Emma to keep a hold of all those good parts of herself, but at the end of the day, I think that's where the real battle will lie: between Emma and herself, the good and bad parts, the light and the dark. And I think she's going to be just fine.