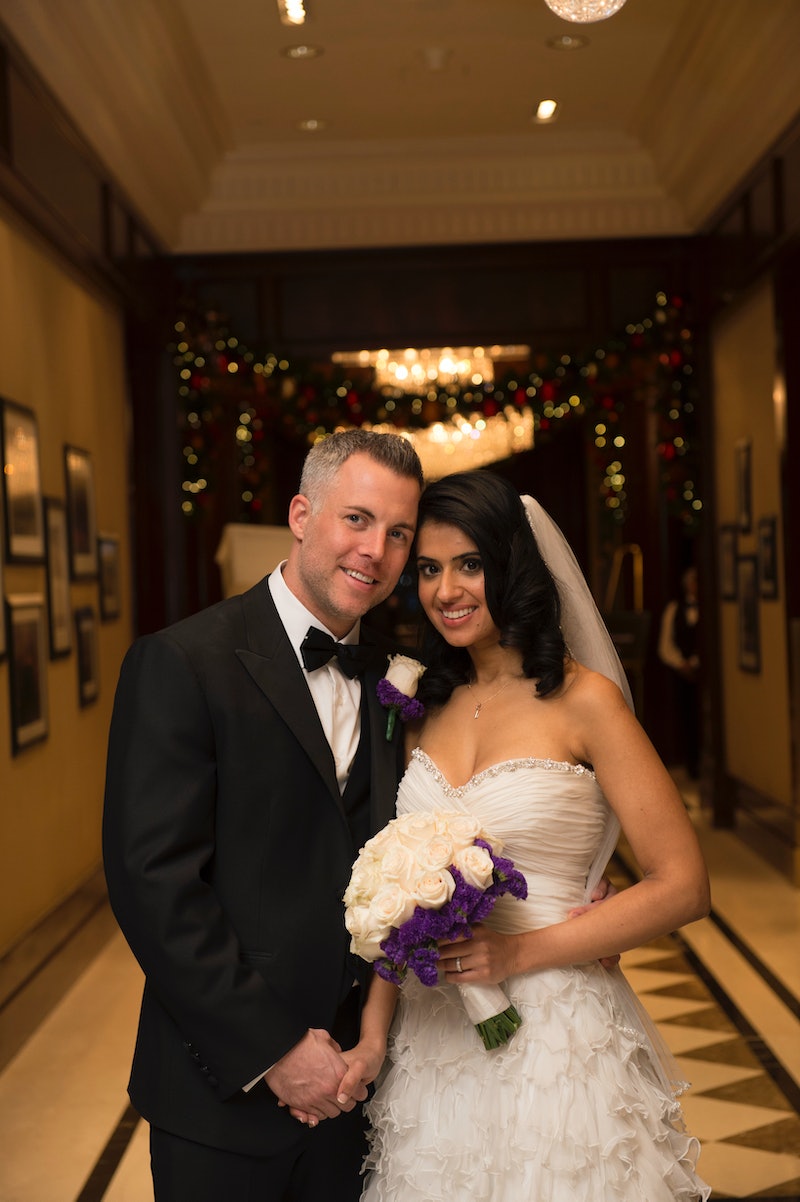 Sometimes I promise myself that I'm going to get a hobby and a life, and sometimes I embrace the person I am and fall headlong in love with a show as good as Married At First Sight. Unsurprisingly, I'm in the midst of the latter at the moment, and have been mourning the end of the series ever since Tuesday night, when "The Decision" episode aired. For that reason, I'm thrilled to hear Davina and Sean from Married At First Sight talk about their split, because getting follow up information on where the couples are now is always a welcome bonus, even if their love didn't last.

In case you haven't been following the show, it's exactly what it sounds like: three separate couples meet each other at the altar and get married on the spot, as complete strangers. Then, after six weeks of moving in together, combining families for the holidays, and getting to know each other, they have to decide whether they want to stay together or get a divorce... which is what happened Tuesday night.

Surprisingly (or unsurprisingly, if you watched as closely as I did all season), two of the couples decided to stay married, and only one elected to get a divorce: Davina Kullar and Sean Varricchio. Those two seemed like they were well-matched at first, but then they never connected on an intimate level (read: had sex), and retreated further and further into their own heads. I was pretty positive before the episode even aired that they should call it quits, and even more convinced when Varricchio started laying out complaints about Kullar once they'd announced their decision. In case you aren't quite there yet, and you need a bit more convincing, check out what the two of them had to say about each other to The New York Post . Here's Kullar discussing Varricchio:

At decision day, we had a friendship going into that and he really blindsided me with some really negative comments. It makes it difficult to have a friendship because a friendship is based on trust, based on components of character, and those were unfortunately laid to the side.

Yikes. I definitely think they could've been friends after the show finished airing if they'd just continued to communicate with each other with respect, but that doesn't appear to be the direction things are headed:

I don’t think the real Sean, the genuine Sean ever really showed up. I can’t say that I really know who I was married to. I didn’t have a connection at all with him.

Woof. God bless divorce, y'know? And let's hear from Varricchio, who has even more knowledge bombs to drop on us about how impossible it was to meet Kullar in the middle:

He says the two of them haven't even spoken since the series wrapped, so, yeah, it's probably good they didn't stay married. And, in the meantime, those of us wanting an update on the other two couples, Jaclyn Methuen and Ryan Rannellone and Ryan De Nino and Jessica Castro will have to wait until next Tuesday at 9:00pm, when we'll get exactly that. I'll be there with popcorn and stars in my eyes for these two happy endings.

More like this
What’s New On Netflix: A Victoria Justice Rom-Com & The Return Of David Letterman
By Arya Roshanian
What’s New On Netflix: The Return Of 'Bling Empire' & A Rebel Wilson Comedy
By Arya Roshanian
All The Clues Gillian & Edgar Are Still Friends After 'Temptation Island'
By Brad Witter
Marissa Has No Regrets About Her 'Temptation Island' Romance With Edgar
By Brad Witter and Kadin Burnett
Get Even More From Bustle — Sign Up For The Newsletter