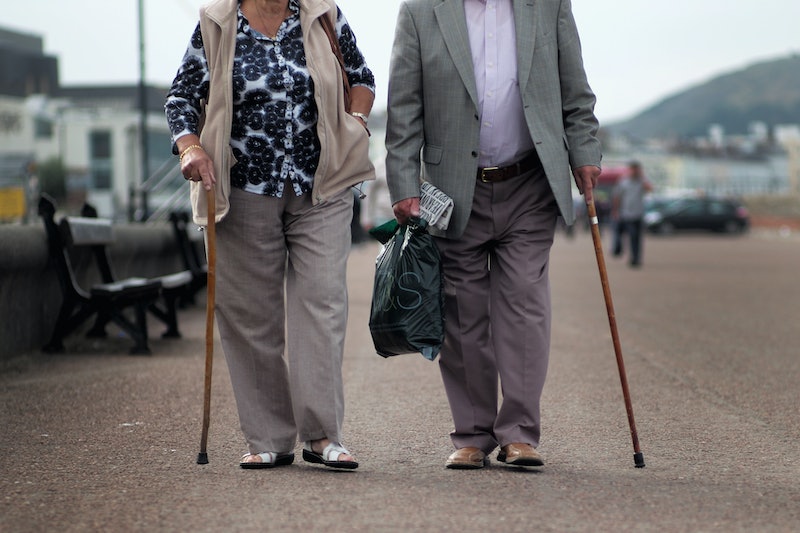 There's no escaping politics, however dispassionate about it you might be. Wherever you are in the world, whatever privileges you do or don't have — in some ways, big or small, the politics of the day have impact on all of our lives. And if you're into talking about it, it can be kind of fun. Especially if you're engaging with somebody who's got a reservoir of information that might be otherwise unavailable to you — an elder, perhaps? Here are 6 reasons to talk politics with your grandparents.

There are some obvious ones, clearly — the wealth of experience a long life affords you, for starters — but it's not as though only positive experiences are worthwhile ones. You and your grandparent might find yourselves in lockstep agreement on some of the issues of the day, or sharply divided on others, but whatever the situation, there could be some valuable opportunities to learn. After all, if it weren't for my grandmother, I wouldn't know how to safely douse a flaming toaster (you unplug it first, naturally).

In short, whether you and your grandparents are thick as thieves or not, I think it's a good idea to reach out, if you haven't already. Here are the six reasons I feel this way — although, like always, this is just my experience:

Everybody knows the stereotypes, especially if you're a liberal-minded young person — the grumpy old grandma or grandpa that clings to antiquated, retrograde opinions on social issues, the oft-invoked elder in the family who sits around watching Fox News all day.

Well, get over that! Sure, maybe it's true in your case, or in some cases, but these are stereotypes all the same, and indulging in those sorts of generalities should cut against the core principles of liberal thought. Assuming your grandparent won't see eye-to-eye with you without bothering to check is at best presumptive, and at worst ageist.

But, then again, nothing is guaranteed. Sure, if you sidle up to your grandfather and spark up a conversation about, say, birth control access, there's a chance it might not go so smoothly for you. The world is full of different people, with wildly differing opinions, and sometimes you'll encounter people who clash with you.

But that's kind of a core facet of living life in a free, open society: people will disagree with you, and even if you're totally sure they're wrong and you're right — like if your grandmother insisted to you that Ronald Reagan was our greatest American president, say — you've got to learn how to deal with that. That can include argument, obviously, but ideally you should know how to set some boundaries in dealing with people, however opposing their views. And bouncing different opinions off an ideologically opposite elder is a good way to develop these social skills.

And, hey, maybe your thinking will actually change! There's no harm in that.

3. They May Or May Not Know More Than You, But They've Seen More

Obviously, simply living longer than somebody else doesn't guarantee you're going to be better informed, more conscious of facts, or better able to express themselves through words.

But it assuredly means that they've been around a lot longer than you, and have seen some things you didn't and might never again. It's one thing to read a book or an article about the resignation of President Nixon, but it's a wholly different story to actually be a citizen watching it on a TV screen in 1974. Whether of not you necessarily agree with their interpretations of events is kind of irrelevant to whether you can enjoy hearing about iconic, important moments in history prior to your birth.

4. It Could Bring You Closer Together

I know a lot of people who have (and had) incredibly close, fulfilling relationships with their grandparents, sometimes bolstered or sparked by the fact that they bothered to open up on political matters. Basically, expressing an interest in exploring shared values or ideals, or the places they aren't shared.

You might not assume, for example, that your octogenarian grandparent is a staunch advocate for reproductive rights, but when you find out that they are, it could add a satisfying, close dimension to your relationship.

5. It Could Push You Further Apart, And Maybe That's Important

Look, there's an undeniable reality here — for all it's important to learn to interact with people you disagree with, there are levels of disagreement that could legitimately strain your relationship with anyone, family or not. I'd venture almost everyone has had a couple experiences like this is their lives, whether with a sibling, parent, grandparent, or just a friend that they thought they knew a little better than they did.

But in the end, isn't it better to know? Honesty and information can often be its own reward, and if you really feel as though the disagreements between you and your grandparent push past the boundaries of "agree to disagree," that's an important recognition to have.

6. You Only Get So Much Time

Not to be morbid, but it's a fact of life — people gradually get old and die, and your grandparent is bound to be a good deal older than you. It's important not to take people for granted in the here and now, because the future isn't assured, and you might just find that you missed your chance for some of those conversations about life, experience, ideals and yes, politics. Conversations which, even if it doesn't seem like it at the time, you might wish you'd had someday.