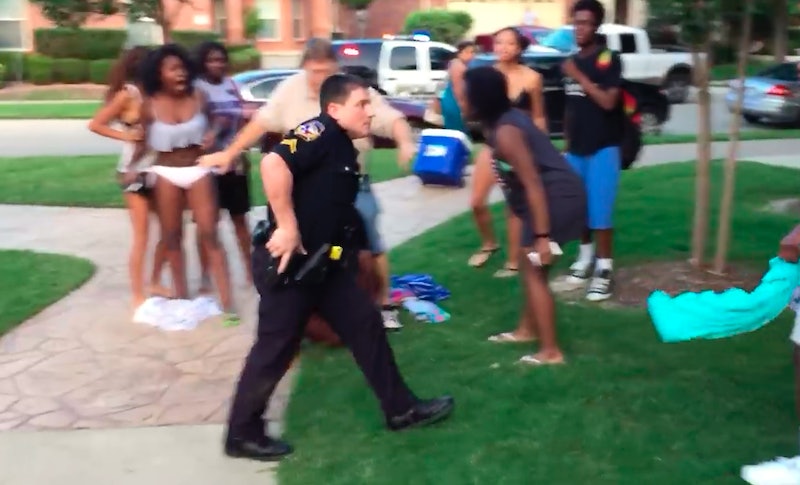 Officer Eric Casebolt resigned from the McKinney Police Department after video surfaced of the officer pulling a gun on two teens and pushing a young girl to the ground at a Craig Ranch community pool. Casebolt resigned Tuesday — just four days after the incident was caught on camera — simply saying "I resign," rather than issuing a lengthier statement, though he did apologize through his lawyer, who said that the officer had previously responded to one suicide and another suicide attempt that day, which left him stressed and emotional. Casebolt is not the only police officer to resign amid public outcry, especially after video evidence depicted scenes of potential excessive force.

Casebolt and 11 other officers were attempting to alleviate community concerns that unauthorized guests had gotten into a restricted access pool as well as investigate allegations that a fight had broken out. Police were responding to a disturbance call, which could have indicated the group of teens celebrating the summer at the pool were simply being too boisterous rather than committing any wrongdoing.

The incident is still under an internal investigation by the McKinney Police Department. Over the past decade, numerous police officers and even entire police forces have found themselves as the subjects of internal investigations and protests following similar incidents. Here are some other officers who've resigned after the public was outraged over their actions.

It took more than three months after the fatal shooting of Michael Brown for former Ferguson police officer Darren Wilson to resign from his position. By the time Wilson had resigned, he'd already been cleared of all charges, as a grand jury had decided not to indict the officer. Wilson's lengthy statement mentioned fears of safety ultimately leading to his resignation from the Ferguson Police Department. In addition to Wilson, Police Chief Tom Jackson, and Officers William Mudd and Rick Henke also resigned following a Department of Justice report that slammed the city's allegedly discriminatory practices.

Although there seems to be a rash of police brutality cases as of late, these incidents are not solely isolated to just the past two years. In 2009, a Dolton, Illinois, police officer resigned after he was caught on camera beating a special needs student at the school he was assigned to patrol. The incident at the Academy for Learning enraged the community and prompted the swift resignation of Officer Christopher Lloyd after he was placed on administrative leave following an internal investigation.

In 2008, a similar incident was caught on camera at the Orient Road Jail in Tampa, Florida. Cameras from the jail show detention deputy Charlette Marshall-Jones throwing a disabled inmate from his wheelchair as he's being booked in the jail. This prompted the resignation of Marshall-Jones as well as intake deputy Dawn Thomas. An additional officer was fired, and three more deputies were briefly suspended. The victim, Brian Sterner, ultimately decided on a pretrial intervention for Marshall-Jones. She was placed in a diversion program that spanned a year and a half and was required to perform 100 hours of community service.

Just last month, a Fredericksburg Police Officer resigned 10 days after an incident involving a driver who had been experiencing a medical emergency that might have led to the incapacitated man striking a Jeep. Officer Shaun Jurgens and two other officers arrived at the scene and demanded that David Washington get out of his car. When Washington was unable to comply, Jurgens then attempted to tase him and, when that didn't work, pepper-sprayed him. Jurgens resigned after command staff reviewed the incident and determined it was inappropriate.

An incident captured on a police cruiser camera led to the resignation of Omaha Police Officer Alvin Lugod, who allegedly fatally shot an unarmed man at a Family Dollar on Feb. 23. According to Omaha Police Chief Todd Schmaderer, the footage reportedly shows Daniel Elrod repeatedly reaching into his waistband and claiming that he was armed. Lugod's resignation came one month after the incident, following an internal investigation and a grand jury concluding that no wrongdoing had occurred. Prior to his resignation, the shooting was the second involving Lugod in two and a half years.

A West Memphis police officer laid out perhaps the strangest reason to resign following a shooting incident in 2007. Officer Erik Sammis stated in a lengthy resignation letter that he was leaving for a better job first and foremost and "due to the healing in which the community needs." Sammis allegedly shot and killed 12-year-old DeAuntae Farrow, who had been brandishing a toy gun outside a convenience store the officer and another cop had been staking out. Sammis, fellow officer Jimmy Evans, and Chief Bob Paudert were all urged by city council to resign following a resolution passed by the council. According to Sammis' LinkedIn profile, that better paying job appears to be as a firearm and tactics instructor for an undisclosed employer.