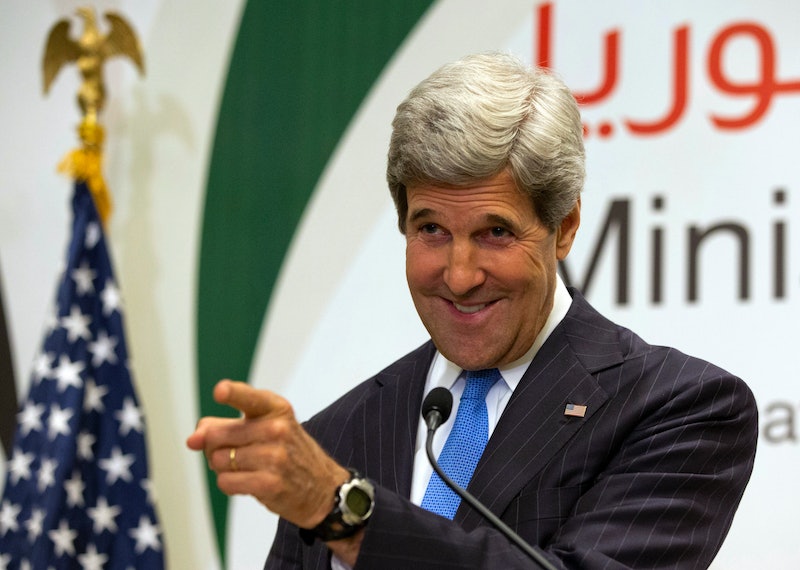 John Kerry broke his leg in a cycling accident a few weeks ago, but the secretary of state isn't letting that keep him away from work. He released the first photo since the crash on Twitter on Tuesday saying, "Feeling good a week after surgery." Despite not being able to walk, Kerry is powering through and still working. The man has a history of refusing to let accidents, illnesses, or injuries, stand in his way; Kerry doesn't let anything get him down.

Kerry broke his femur May 31 while cycling near the French Alps outside Geneva, Switzerland. He had surgery on his leg last week at Massachusetts General Hospital and is still there for physical therapy. Kerry's photo from the hospital was posted after the Washington Examiner published an article Tuesday asking why there hadn't been any photos of Kerry since the accident. The picture shows Kerry with his injured leg propped up on a pillow while he's on the phone, seemingly working. People are wondering whether or not Kerry will be able to travel overseas for the Iran nuclear negotiations in a few weeks, and State Department spokesman Jeff Rathke told ABC News on Tuesday that it's under review and he doesn't have a timeline of his recovery.

Kerry may be forced to slow down, but he won't be stopped. Here are three other examples of times he hasn't let bad circumstances keep him down.

In 2012, Kerry showed up to an event at the White House for that year's Stanley Cup champions with two black eyes and a broken nose. The then-senator's office said he was injured when he fell in a multiplayer pile-up in a family hockey game. Regardless of his beat up face and a few stitches, he was at the White House ready to do his job.

Kerry tore part of his rotator cuff in 2004 while trying to brace himself when his presidential campaign bus came to an abrupt stop. He had surgery at the same Boston hospital he's currently in to repair the shoulder injury. "I'll be back faster than you can blink," he told the Building Trades Legislative Conference before the surgery.

Kerry was diagnosed and treated for prostate cancer in 2003, when he was serving as a Massachusetts senator and running for president. When he disclosed his illness, he vowed to be back at work and continue his presidential campaign within a few days. Now that's dedication.