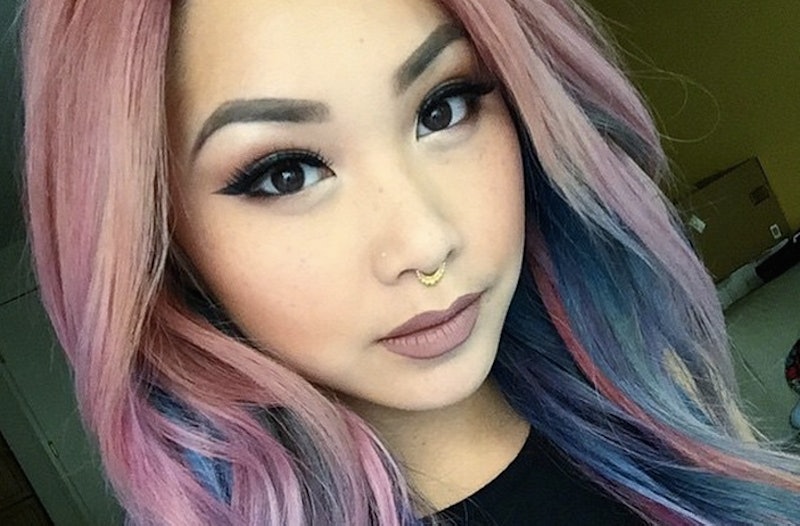 So it's summer: You're on a seasonal break, going away on an exotic holiday, or maybe you're just bored of your current hairstyle. Well, here's to shaking things up a bit, because summer might be the perfect time for you to try the alternative hairstyle that you've been eyeing.

It's always fun to change things up a bit and be a little more daring than you normally are. And hey, it's just hair, after all — and it will grow out. Nothing has to be permanent! But you never know: In breaking out of your box, you might find that special hairstyle that becomes your thing and changes your ideas of what you can accomplish in terms of style and fashion. Sometimes it just takes a little exploring to get there.

Alternative hairstyles are set apart from the trendier, conventional, or traditional hair looks we're used to. Instead, you could describe them as lively, unique, and audacious. For the most part, anything goes with an alternative hairstyle. I mean, when you're going to go all out, the crazier the better! If you want to break free from the standard hair rules, then go for it, but make sure you understand the risks: If you're going to chop all your hair off, it will take some time to grow back out, and non-conventional colors — just like other dyes — may damage your locks. The good thing is that there are so many hair repair products on the market now that you don't really have to worry that quite as much!

If you've been feeling timid about a change, perhaps this roundup of styles to try will give you a good idea of where you can go from here — from the not too crazy to the outrageous!

It's a look that's been rocked on many a celebrity in the last few years, but you probably have that one daring friend who's tried it as well. And it's hard to deny: It does have a certain edgy appeal to it. Whether you go for a side partial shave or one at the bottom back of your head, it's sure to get a few glances. I've also heard that it's really fun to run your fingers over the shaved bits!

But if you're not into the whole shaving a part of your head thing, there's usually an alternative to the alternative. Try doing a tight braid on the side and you'll get the same effect. It's super cute!

Here's a photo of myself sporting my own asymmetrical bangs. One day I got bored, took out my pair of scissors, and just starting cutting. I'm sure it began as a trim, but I consider myself pretty daring... so I went for it. I sported that type of bangs for several months because I ended up liking the style so much. Like I said, you never know.

Just because the mohawk is usually associated with a super long, super spiked up mass in the middle of your head doesn't mean that you can't rock a more modern interpretation. I think this look works especially well with thicker, curlier hair, but even finer, straighter hair can be styled as such. Just imagine the mohawk portion of your hair being more like side bangs that frame your forehead.

This is the trend that just keeps getting better and better and doesn't seem to be going anywhere, anytime soon. It's just too fun, right? There are so many options here. Dip-dying just the bottom portion of your hair, doing the same with two different colors, or going for an all-over color as well.

There are few things you could to do your hair to exude more fun, brightness, and well, just general happiness. If you're looking for something totally different, this is probably my number one suggestion.

This look is definitely the most daring of styles on this list. You're really committing here, and though it's probably easier to grow out than a partial shave as it's all the same length, it's still the most dramatic of the changes.

People always say that you have to have a certain type of face and head to make this look work for you, but I disagree. I think any shape can work, because it's not the way it "frames your face" that matters. It's the way you rock something with confidence.

I think it's time for the curly-haired girls to rise up and take this look by storm. I always see it on straight, thinner hair, and though I love that style as well, I think a little curl really adds a different effect to this cut and makes it just a bit more fun — purely because there's more spunk with a few ringlets! Messy is totally accepted in this style, too, which makes your morning routine a little easier, don't you think?

If nothing has really caught your eye or you couldn't bare to deal with too much change, this is a fun one for anyone with their hair just as it is.

Experiment with some pigtail buns and decorate the back with cute pins and clips. The '90s are back full throttle, y'all, so break out those butterfly clips, and get ready to give all your pre-teen styles new life.