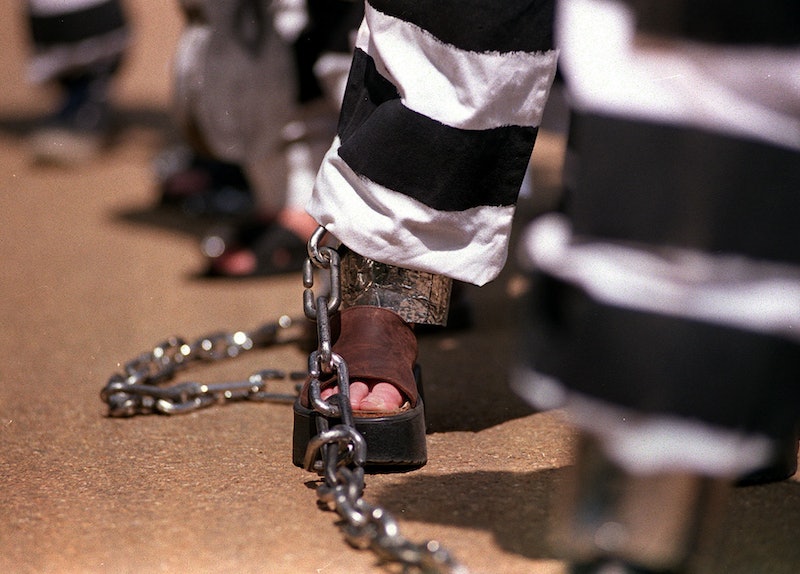 Thursday marks the sixth day that authorities have been searching for recent prison escapees, Richard Matt and David Sweat in New York. A massive manhunt is in progress, but so far the search party has turned up empty, befuddling state officials. I've noticed that much of the language surrounding the search for Matt and Sweat is fairly gendered. For example: We call the search for criminals a "manhunt," and experts have said that escapees almost always return to their "wives or girlfriends" at some point. This got me thinking about women who have escaped from prison, because women do in fact sometimes wind up on the run from authorities after breaking out of prison.

Hollywood has glamorized prison breaks and being a fugitive on the run. Think: The Shawshank Redemption, O Brother, Where Art Thou?, and The Great Escape, all starring men who busted out of jail and tried to have a life that didn't involve cells and jumpsuits. While not so frequently depicted on the big screen, the stories of various women's escapes from prison are incredibly fascinating and nerve-wracking. Here are some of the fugitive women have pulled off prison breaks over the years.

While typical depictions of prison breaks as involve intricate tunnels forged with creatively made tools, sometimes inmates just sneak right out of prison. This was the case with The Niantic Five, a group of five women who escaped from the Niantic Correction Institution in Connecticut. In 1985, the women pushed themselves through the bars on the prison's windows and simply walked away.

Judy Lynn Hayman had somewhat of a confusing roundabout with the prison system. Hayman escaped from a women's prison in Ypsilanti, Michigan, in 1977, where she was being held on charges of misdemeanor attempted larceny. Hayman was able to stay undiscovered by law enforcement and out of prison for 37 years before she was found in San Diego in 2014. Or so it seemed. After being held in a San Diego jail for five weeks in 2014, it was determined that Hayman had gone back to serve the remainder of her sentence, but having changed her name in the years since, authorities didn't realize she had already served her time.

Fourteen months into a 10-year sentence that Marie Walsh was given for her involvement in a 1974 heroin deal, she broke out of the Detroit House of Corrections. Having successfully escaped, Walsh, then Susan LeFevre, changed her name, got married, had kids, and kept her past a secret from her family. She was able to maintain her double life for more than 30 years, until eventually being caught and sent back to prison, where she served another 13 months of hard time.

Now this is a dramatic escape. Samantha Lopez was in the midst of serving a 50-year sentence for aiding and abetting a bank robbery in Georgia when she broke out of prison in 1987. Her boyfriend at the time, Ronald McIntosh, apparently stole a helicopter, flew over to the prison yard, picked up Samantha, and the two fled in the chopper. They were busted 10 days later while buying wedding rings.

Sarah Jo Pender was serving a 110-year sentence for double murder in an Indianapolis prison when she escaped in 2008. She was not found by the police until four and a half months after her escape. Like many prisoners, Pender insists that she did not commit the crime and that she did not receive a fair trial, which was a main motivation for her desire to escape. The twist is that the lawyers who prosecuted Pender during her trial now agree that she was likely not tried fairly.

Roberta Gavina did not spend as much time on the run as the other women mentioned above; she had fewer than 24 hours of freedom after she walked off just before a court appearance in Phoenix. Gavina was arrested for shoplifting, and being a repeat offender, knew the ins and outs of the prison system, making it easier for her to know when and how to escape. The shoplifting charge was a misdemeanor, but the charge she faced for her escape was a felony with a sentence of up to seven years.