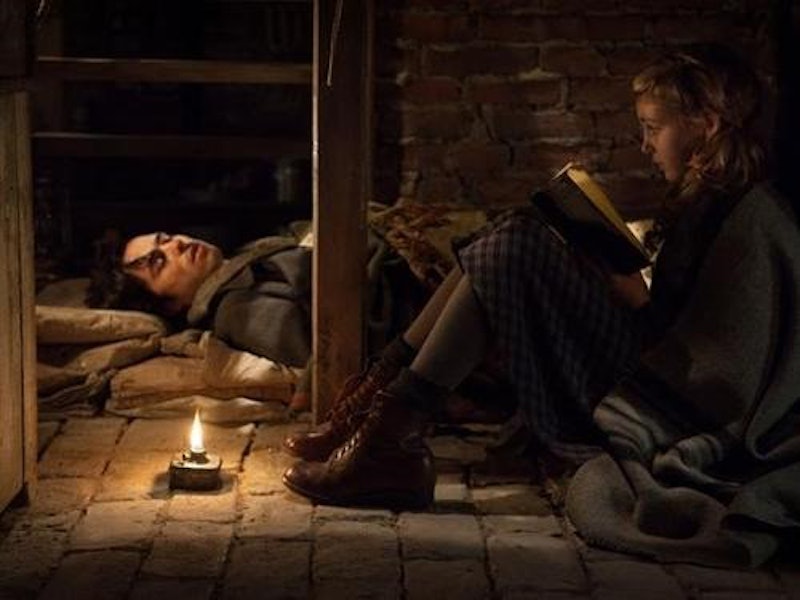 With all the hype surrounding sequels like Thor: The Dark World and Hunger Games: Catching Fire, it's easy for a movie like The Book Thief — that exists without the superpowers or A-list prowess of Jennifer Lawrence — to get lost in the shuffle. Unlike recent films that depict the horrors of our planet (12 Years A Slave, etc.) with shocking reality, The Book Thief , based on the NYT best selling novel, skimps on the gruesome details, because we all know just how awful this time period was. Undeniably one of our darkest hours, the tragedy did evoke more than a handful of beautiful, heartfelt (and heart-wrenching) films. Below, a few of our favorites:

Terrence Malick is such a hit or miss. His most recent offering, To the Wonder, was determined by many critics (myself included), a confusing and nonsensical failure. The Tree of Life left viewers either in absolute awe, or rolling their eyes. But 1998's The Thin Red Line, the true story of the conflict at Guadalcanal, is decidedly a success. That is, in all of its 2 hours and 45 minutes, it depicts the war and those involved in a brutal, blinding light, a mediating of these men's alive as they attempt to get to the other side alive.

Private Ryan follows a group of U.S. soldiers (headed by Tom Hanks) go behind enemy lines to retrieve a paratrooper whose brothers have been killed in action following the Normandy Landings. It's a film that's hailed as the best war film of all time, the most brutal but accurate portrayal of war on the front lines. Roger Ebert said of the 1998 flick, "Spielberg knows how to make audiences weep... But weeping is an incomplete response, letting the audience off the hook. This film embodies ideas. After the immediate experience begins to fade, the implications remain and grow."

The green dress. The library. The anxious ticking of a clock. If this is the only scene you recall from 2007's Atonement, I don't blame you. A film that is aching with sexual tension, most ardently expressed with the parting of Keira Knightley's legs against a book case, Atonement is more than a film about war, it's a film about sex. Sure, perhaps love is somewhere in the equation, but Keira and James McAvoy's connection in Atonement is one of lust. It is a film depicting romance first, and war second. But let this not devalue it's scenes of conflict. One scene depicting the infamous dunkirk beach shows a line of military horses, one by one being shot in the head. Horses are clearly an expensive and valuable commodity during war time, but because there was no way to keep them, no way to keep them alive, they are discarded as quickly as the trigger is pulled. A single scene such as this reminds us of the often nonexistent moral code during war time.

1993's Schindler's List is memorable for many reasons, most notably the directness in which it portrays the greed, loss, emptiness and inhuman actions of Nazis during the war. Film critic Desmond Ryan said of the picture, "Schindler's List is filmed in black and white, but the triumph of Neeson's portrait and Steven Zaillian's screenplay is that Oskar Schindler remains gray and enigmatic."

A Jewish couple and their son are herded into a Nazi death camp, only his son thinks their capture is all part of an elaborate game. The Italian film is heartbreaking in every instance, and draws upon our most human emotions — love, humor, the primal want to survive — in a way I can only compare to Elie Wiesel's book, Night.

A German film, Das Boot is unique in the sense that it is presented from the Nazi's perspective, and proves that everyone, even Nazis, are simply human.

More like this
9 Films About Mental Health To Watch On Netflix UK
By L'Oréal Blackett and Sophie McEvoy
Laura Dern Said “Cultural Awareness” Made Her Rethink This 'Jurassic Park' Fact
By Grace Wehniainen
The 'Hocus Pocus' Sequel Finally Has A Release Date & It Makes Total Sense
By Shannon Barbour and Radhika Menon
Colin Firth Revealed His Favourite Mr. Darcy (& No, It's Not Himself)
By Sophie McEvoy
Get Even More From Bustle — Sign Up For The Newsletter