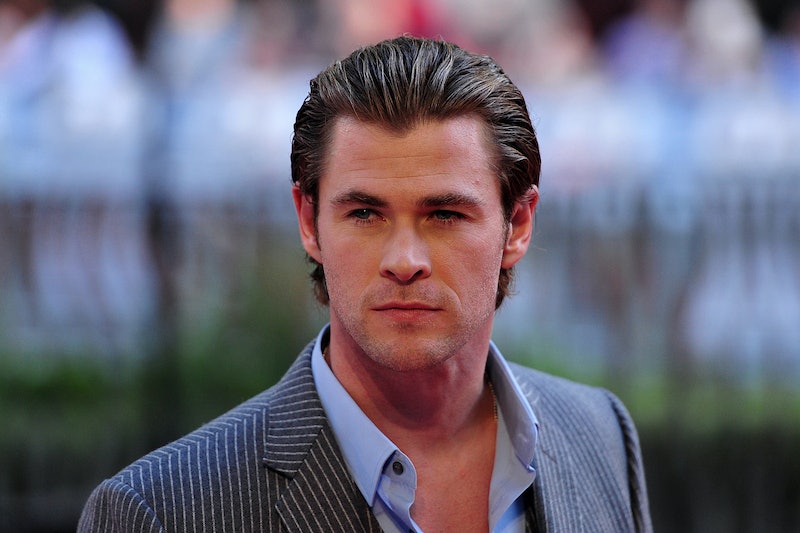 In case you haven't heard, and I don't know how you haven't, Paul Feig revealed on his Twitter on Wednesday that Chris Hemsworth is playing a receptionist in the all-female Ghostbusters movie. Yes, that's right. Not only do we get a new generation of Ghostbusters played by amazingly talented ladies I'm already looking up to, but we also get to look at Thor while we do it. Is it Christime already? While no further details have been released — is he there for just one scene or is he there to Pepper Potts this operation and keep it running smoothly? — I can't help but start to imagine what it would be like if Hemsworth became a full-time receptionist. Say, at your place of work. Take a moment to think about this.

Quite honestly, it's probably a bad idea to have People's Sexiest Man Alive wandering around with post-it notes and updating the company calendar. How are we expected to work under those conditions? If such a miraculous event were to occur, if Hemsworth were to abruptly retire from acting so he could go around the world acting as a receptionist to all the best companies, there are certain things you could probably expect to happen as a result. Here are seven examples.

1. No One Gets Any Work Done

Thor, ruler of Asgard, is literally sitting right there at the front desk. You're not getting any work done today. Even if you can keep your eyes off him, I'll bet you have so many questions, like "When are we getting a Black Widow movie?" and "How many pranks has Chris Evans pulled on you in the last day and a half?"

2. Water Cooler Gossip Is At An All Time High

Everyone found out on day one that Hemsworth is married to Elsa Pataky, but that just gave everyone the incentive they needed to invite Elsa to have lunch with them every day so they could talk about the important gossip points. Like what conditioner Hemsworth uses on his hair and whether or not he has a giant, poster-size version of his People magazine cover on his wall at home.

Because everyone needs an excuse to invite Hemsworth and Elsa over, obviously. Poor Hemsworth then gets stuck standing by the coat room idly trying not to look bored while Elsa is yanked into the kitchen for Office Gossip: The Kitchen Edition.

4. On Halloween, He Always Comes Dressed As Thor

Every. Single. Time. And it's like, "Hey, man, we get it. We know, OK? Maybe shake it up and come dressed as Star-Lord next time, hm?"

Your star-struck guests who are trying very hard not to ask for an autograph will be amazed, especially when you get them into your office and reveal that you don't actually need to meet with them — you just wanted them to know Hemsworth is your receptionist.

7. He's The Most Popular Guy In The Office

On top of being the Sexiest Man Alive, and Thor from the MCU, Hemsworth also seems like one of the nicest and most down to earth people you could ever possibly have around. Elsa will always be more popular than him in your office, but he's still the guy everyone wants to hang out and have a beer with. In light of all this, he's going to make a great addition to the Ghostbusters film. Too bad he can't be everyone's receptionist at once, am I right?