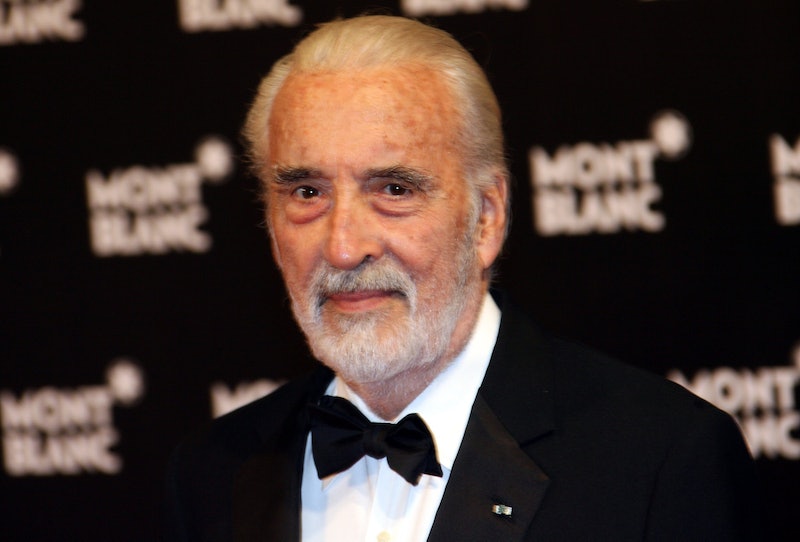 On Thursday, the entertainment industry lost another great talent. The iconic Christopher Lee died at 93 years old after being admitted to Westminster Hospital for “respiratory problems and heart failure,” The Hollywood Reporter revealed. There's no doubt Lee made an impact in Hollywood and the lives of his fans, who will forever remember him as a talented man and someone who could pull off any villainous role, including Saruman from The Lord of the Rings trilogy and The Hobbit films. Lee was a nerd culture icon and his legendary characters will never be forgotten.

Fans may see Lee as an actor who was typecast in certain roles, specifically in evil or darker parts, but for the Dracula star, he never felt like he was playing a villain. As he told Games Radar in 2005, "Sure, I’ve played plenty of heavies, but as Anthony Hopkins says, 'I don’t play villains, I play people.'" Whether he was playing a villain or not, Lee could do no wrong when it came to acting, which I'm sure many will agree with, especially for those who have been lifelong fans or have just seen Lee in a movie here and there.

With that said, it's time we honor Lee and remember him for his most famous roles that prove that not only could he pull off any dark role handed to him, but that the actor greatly impacted nerd culture, as well as the entertainment biz, in general.

Saruman: The Lord of the Rings & The Hobbit

As Saruman in LOTR and The Hobbit, Lee opposite of Sir Ian McKellen's Gandalf was some of the best acting and moments throughout the films. If any of Lee's role showcased his ability to portray evil and darkness, it definitely was as Saruman.

How can you forget Lee as Count Dooku in the Star Wars prequels? Again, Lee played the main antagonist, who was once on the right side of the Force, but eventually went dark (would we want it any other way?).

Before making a name for himself as Saruman, Lee portrayed the lead in several Dracula films. The first time viewers saw Lee as the legendary character was in 1958's Horrors of Dracula, where he starred as the count.

If you're a Tim Burton fan, then you definitely know Lee from many of the director's films, including Charlie and the Charlie Chocolate Factory (Dr. Wonka), Corpse Bride (Pastor Galswells), Dark Shadows (Clarney), Alice in Wonderland (Jabberwocky), and Sleepy Hollow (Burgomaster). In addition to being a villain, Lee knew how to play, or voice, many diverse roles.

In the 1973 version of The Wicker Man (not to be confused with Nicolas Cage's 2006 movie), in typical Lee fashion, he portrayed Lord Summerisle, the ruler of an island, where many strange, interesting, and frightening things occurred.

Scaramanga: The Man with the Golden Gun

Last, but definitely not least, Lee played Bond villain Scaramanga opposite Roger Moore's James Bond in The Man with the Golden Gun. As you might have guessed, yes, his weapon of choice was a golden gun.

Thank you, Christopher Lee, for not only impacting films, but also the lives of your fans. Your ability to play evil extremely well will forever be remembered.

More like this
Kimberly J. Brown & Daniel Kountz Looked Back On Their ‘Halloweentown’ Romance
By Stephanie Topacio Long
All The Sneaky Lindsay Lohan Movie Easter Eggs In Her New Ad, Explained
By Stephanie Topacio Long
Alicia Silverstone Has Recreated An Iconic 'Clueless' Scene
By Frances Stewart
Everything To Know About Obi-Wan Kenobi Season 2
By Kadin Burnett
Get Even More From Bustle — Sign Up For The Newsletter