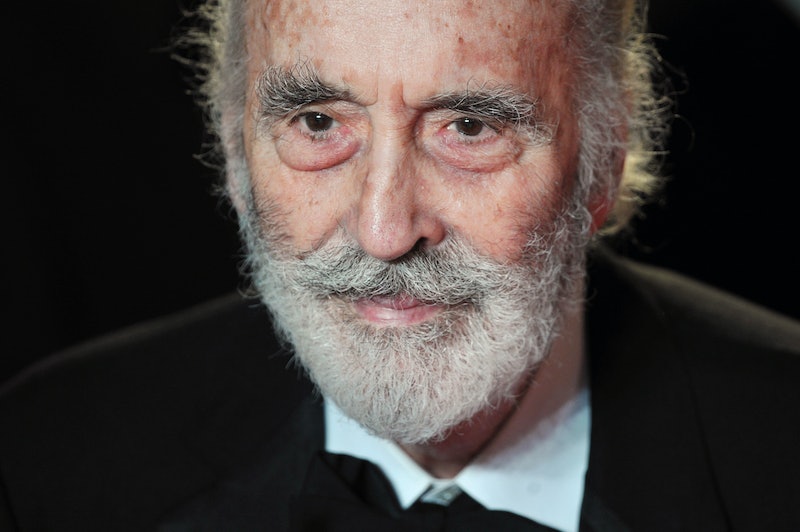 In sad news to film fans everywhere, movie legend Christopher Lee has passed away at the age of 93. The actor, who is best known for his work in the horror genre and as a cinematic villain, died on June 7 after being admitted to a London hospital for respiratory problems and heart failure. According to The Guardian, Lee's wife wanted to hold back the information from the media until all family members were informed.

The actor, who first made a name for himself by portraying horror fixtures like Count Dracula and the Frankenstein monster, later expanded his already hefty film résumé by appearing in huge movies franchises like Lord of the Rings and even Star Wars. What is even more impressive is the fact that the British star never retired from acting. He was even set to start filming a movie this fall alongside Uma Thurman.

As you might imagine, horror fans and Lee fans in general are very saddened to hear this news. He was well loved for his steadfast dedication to acting and charity, and many people have already taken to social media to remember the star. Celebrities and ordinary fans alike have been posting about the tragic occasion, serving as a reminder of the wonderful and extraordinary life he lived. Here's what they had to say:

More like this
Lizzo & Myke Wright's Relationship Hit A New Level With Their "Hard Launch"
By Stephanie Topacio Long
Bennifer's Relationship Timeline Now Includes A Grammy Date Night
By Jake Viswanath
What Is Mary J. Blige’s Net Worth? The 9-Time Grammy Winner Is Doing “Just Fine”
By Hugh McIntyre
Taylor Lautner Copped To Finding Jacob "A Little Annoying" In Twilight
By Stephanie Topacio Long
Get Even More From Bustle — Sign Up For The Newsletter
From hair trends to relationship advice, our daily newsletter has everything you need to sound like a person who’s on TikTok, even if you aren’t.