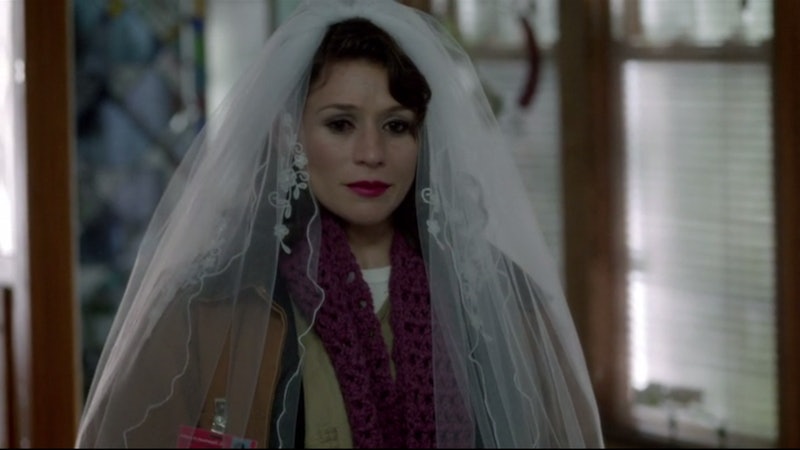 It's hard to pin down which of the Orange Is the New Black characters tugs at the heartstrings the most. For me, though I'm more of a pragmatic romantic than a hopeless one, I still feel the most for Lorna Morello (played by Yael Stone). Season 2 was a rough one for her. (Warning: If you're not caught up on Orange Is the New Black, there are spoilers ahead.) It was revealed that the thing that kept her going while she was at Litchfield, her engagement and impending wedding to Christopher, was never going to happen. That information came out in an episode that also unveiled why Morello was in prison to begin with.

What landed her in the slammer? Her flashback episode was one of last season's best. In it, you can see Morello does some shady things with credit cards, committing fraud to get her hands on expensive clothes without paying for them. (She was always into fashion.) The whole time, the audience is led to believe she'll be caught for stealing. Then she finally meets Christopher — yes, that fiancé she'd always been talking about, finally! — and it turns out he wants nothing to do with her. Instead of stealing, Morello was in prison for stalking. Her obsession with Christopher turns to harassment, and he throws the book at her.

Still, even knowing she's obsessed and unhinged for a man she went on one date with, I feel for her. Here are some reasons why.

Last season was mostly about Morello coming to terms with the fact that Christopher was marrying someone else. The path was bumpy — she kindasorta escaped for a little bit and took a bath in his tub, creepy! — but she managed to pull herself together. "Season 3 focuses on what this particular group of women use to keep going," Stone told the U.K,'s Express, "whether that’s a personal philosophy, whether that’s a religious notion in a more formal sense, whether that’s faith in another person or faith in an idea of the future faith in an illusion." If it isn't Christopher, we know Morello will find something.

Her Transgressions Are More Sad Than Malicious

Morello's crimes are heinous, to be sure, and if I were Christopher I'd have acted the same. But there's also something sadder about them than some of the other characters — like she was trying to live beyond her means and acquire this fairytale life and boyfriend because she really has no home of her own. “I don’t think Lorna put her roots down anywhere," Stone told The Saturday Paper. "Physically maybe, but emotionally certainly not. At least for the first half of her life she’s been deeply, deeply lost. She kind of covers it with a lot of bluster, but she’s really quite lost.”

Her Name Is Lorna Morello

Doesn't that sound like some kind of 1930s movie star to you? It's the perfect name for a hopeless (if slightly insane) romantic.

She's (Mostly) Nice to the Other Girls

Doesn't it seem like Morello is the only one on the show without a mortal enemy? Maybe it's because she's one of the first people the inmates see, driving the van around, and she's generally pretty welcoming to them. (Uh, especially if they're white.) When she's on screen, I don't have to worry that she's going to stab anybody.

She's Got That Jersey Accent

And it's a total put-on — Stone is actually Australian. Talking to Vogue about how people are surprised to hear her real voice, she said, "it’s such a lovely compliment because I guess it means they bought it hook, line, and sinker, which is great for me keeping my job."

And, Of Course, the Red Lipstick

At first, this wasn't just her defining character trait — it was her only one. When asked how much backstory she knew about her character, Stone told Vogue: "None. The information given to me when auditioning was 'Lorna is wearing red lipstick.'”

More like this
Meet Kelly Fisher, Dodi Fayed’s Ex-Fiancée
By Karen Fratti
Here’s How 'The Crown' Will Cover Princess Diana's Tragic Death In Season 6
By Brad Witter
What Was Really In Princess Diana & Prince Charles’ Divorce Settlement
By Karen Fratti
The One Detail From The Tampongate Scandal That The Crown Missed
By Karen Fratti
Get Even More From Bustle — Sign Up For The Newsletter