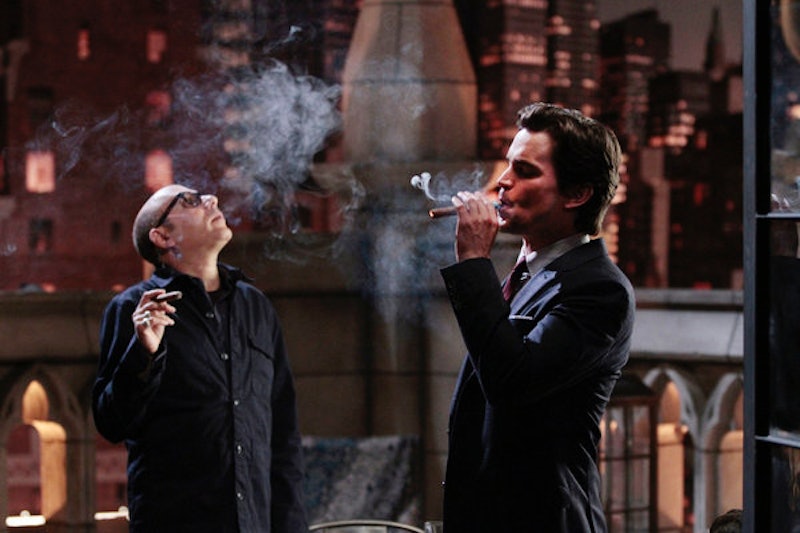 Mozzie, White Collar's manic con-man, has been officially without a residence and bunking with Neal for three episodes now. Neal's basically getting sick of it, and, truth be told, we probably would be too. Mozzie's always been quirky and his habits have been on the odd side, but we never got the full dose of what it'd be like to live with him until now. Neal, who's well accustomed to living in his swanky apartment with Central Park views alone, is getting pushed to the limit with Mozzie's continued presence even after he came into that large sum of money last week. So far, Mozzie's proved to be the most terrible roommate ever, with the exception of one incredibly redeeming quality that he showed off in last week's and Thursday night's episode. But first, let's break down the reasons why Mozzie would be the best — and the worst — roommate.

MOZZIE WOULD BE A TERRIBLE ROOMMATE:

1) He uses Neal's towels. If there's one thing that should be kept personal, it's your bath towels (at least if you're just roommates). In last week's episode, Mozzie helped himself to Neal's towels, and as anyone that's been to college/had a roommate ever in life knows, this is a HUGE no-no and deal-breaker.

2) He's keeping a smelly, rotting fish in the refrigerator on the grounds of it being a delicacy. Can anyone explain to me the appeal of smelly food that isn't garlic? Because I really just do not get it. When you share a fridge, you just don't stock it up with stinking food, and you definitely keep track of your leftovers. I'm not dealing with your fuzzy, three-week-old leftover chili so just stop.

3) HE'S DRINKING ALL OF THE WINE. Neal has expensive taste that naturally carries over into his impressive wine collection. (Swoon.) On Thursday night's episode, Mozzie cracked open a bottle of Neal's wine and didn't even leave enough for him to have one glass. Status: WORST ROOMMATE EVER. Literally, you'd be sent packing right away, whether you're someone's BFF or not, if you did that in real life.

4) He's keeping bees on the terrace. I'm all for bringing your pets along. I love pets. Cats, dogs, fish, reptiles, rodents — they all work for me, but absolutely no insects and especially not three hives of bees. Why would anyone ever think that's okay? On Thursday night's episode, Mozzie surprises Neal with not one but three "orphaned" bee hives that he took off of a friend's hands while he's drinking all of the wine. That's just a brutal attack that no roommate should ever have to endure. At least leave me my wine to take the edge off of my anxieties about being stung to death.

MOZZIE WOULD BE THE BEST ROOMMATE EVER:

5) The one, singular reason that Mozzie's proven himself as potentially the BEST possible human to live with — he's a master chemist who's invented a quick cure for the flu. Peter suffered from a pretty serious bout with the fabled disease from hell on Thursday night, and Mozzie came up with a honey-flavored concoction that cured him in record time. For someone who refuses to get a flu shot (and who tests their luck and sanity every year when flu season arrives), having a chemical genius around to invent miracle potions would be a dream come true. I'd gladly give up all of the wine on earth for that.

Mozzie shows no sign of picking up and vacating Neal's apartment anytime soon but at least if Neal gets sick, he'll have access to a speedy recovery. It also would never get old hearing things like this: