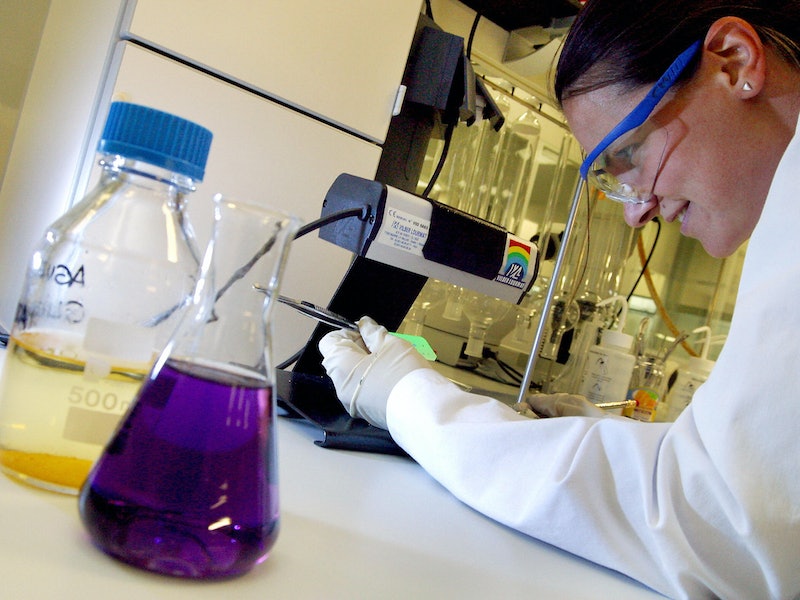 For such an visionary when it comes to science, his comments about women were appallingly backwards. At the World Conference of Science Journalists in South Korea earlier this month, Nobel Prize laureate Sir Tim Hunt said "the trouble with girls" in science is that they essentially can't control their emotions while working, and therefore labs should be segregated by gender. Yeah. It was pretty bad. Apparently, Hunt recognized that too because he has since apologized for his comments and resigned from his post at University College London. But that doesn't mean he doesn't deserve to be poked fun of a little, and that's exactly what female scientists are doing now with the most perfect hashtag: #DistractinglySexy.

On June 8, the opening day of the World Conference of Science Journalists in Seoul, Hunt stood before an audience of esteemed scientists and science journalists, many of whom were women, and said:

He added that he was an advocate of non-coed labs because he didn't want to "stand in the way of women."

OK, first of all — how presumptuous! You're not exactly Sean Connery. Second of all, try telling that to Marissa Mayer, Sheryl Sandberg, or even Marie Curie, who actually lived in a time when women couldn't even vote. Even she's turning over in her grave at Hunt's shockingly antiquated comments.

Hunt, who won the Nobel Prize for physiology or medicine in 2001, tried to explain himself to BBC Radio 4 on Wednesday:

He also added an apology:

I'm really, really sorry that I caused any offense ... I just meant to be honest.

On Thursday, University College London, where Hunt was an honorary professor with the UCL Faculty of Life Sciences, confirmed in a statement that he had resigned following his comments at the conference. It added:

UCL was the first university in England to admit women students on equal terms to men, and the university believes that this outcome is compatible with our commitment to gender equality.

Seeing Hunt resign wasn't enough for some, however. For several female scientists — you know, the ones who can't help but fall in love with men like Hunt — an even more appropriate outcome involves a little fun at his expense. Following news of his sexist comments, female chemists, biologists, coders, archeologists, and more are now using the hashtag #DistractinglySexy to show just how heated things can get on the job, and their tweets are the perfect comeback for Hunt.

And yes, they're having the last word.