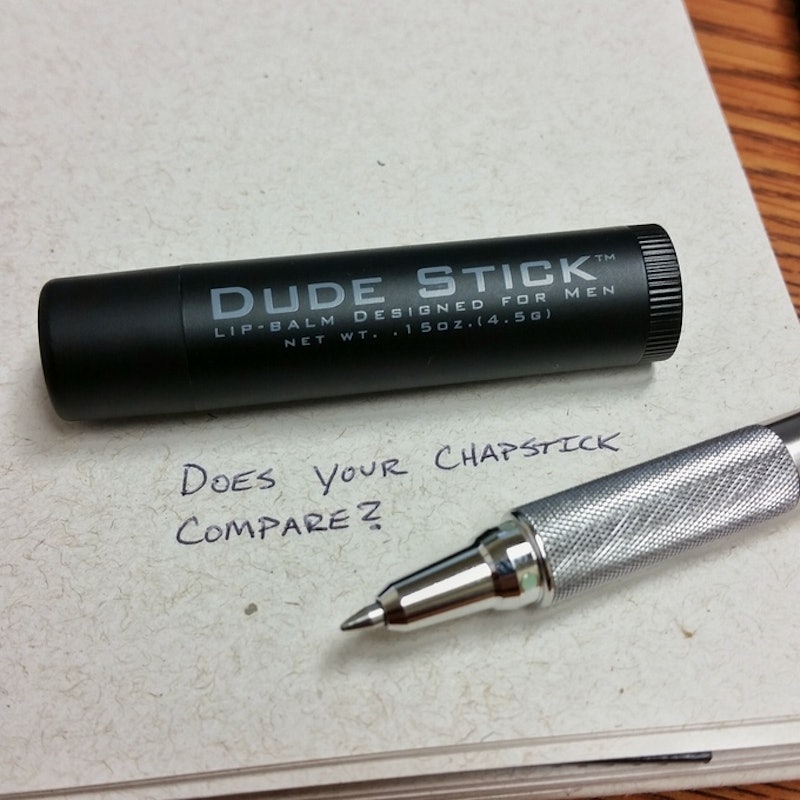 If you're anything like me, you've probably lived your life up until now thinking that Chapstick was a pretty benign, unisex beauty product, and boy were we all wrong. A new Kickstarter campaign suggests that while Chapstick is fine for ladies, men are in desperate need of a Dude Stick. You might I'm making a penis euphemism right now, but I'm not. This is a real thing. Although, this line of rhetoric does oddly seem to be the main method of marketing for many male-targeted products. There seems to be a belief that if a male audience thinks about their own genitalia they'll be much more likely to purchase a product.

This new lip salve sounds like it could actually be a parody of these type of male-centric products, but it is all too real. The idea for the matte black-packaged balm came to the creator, Spencer Sevy, "when I was rushing to work one morning and stopped to grab some lib balm at a gas station. My lips were basically bleeding and I was frantic for any chapstick or lip balm. When I looked at my choices, I was not too impressed. Some of the lip balm would just make them hurt worse, but none were designed for men."

Maybe that's because lip balms are designed for everyone? If for some reason you're still intrigued by this product, a quick $5 donation will get you a stick of your very own, while a $100 donation with get you 30 sticks, along with homemade cookies and "a color photocopy of my right hand to high-five when you get lonely." Good to know bromance is still very much alive and well.

And it turns out the Dude Stick is only the tip of the iceberg when it comes to oddly masculinized, unisex products. Here's seven more pointlessly gendered products so you can pump up your masculinity to the max.

Because eating regular yogurt is for sissies, duh.

Hey, really rugged dudes like their nails to look pretty, too.

As a modern man, you want your home to be permeated with a nice light scent, but not so nice people think you're girly or something.

4. This Bacon Tea from ManTeas

Men like bacon. Women like tea. But surely no man can turn down bacon tea! Especially when it's placed into such an appetizing double tea bag...

Sure, you're watching your weight, but you still want to feel like a tough manly man while you're losing lbs. Just don't listen to your girlfriend when she tries to tell you you're still just drinking diet soda. What does she know anyway?

I'm not totally sure why men's yoga mats can't just be a color but need to look like a burrito, but I'm also not mad at it.

It's so crazy to me that this is a real thing, I can't even make a snarky joke about it.