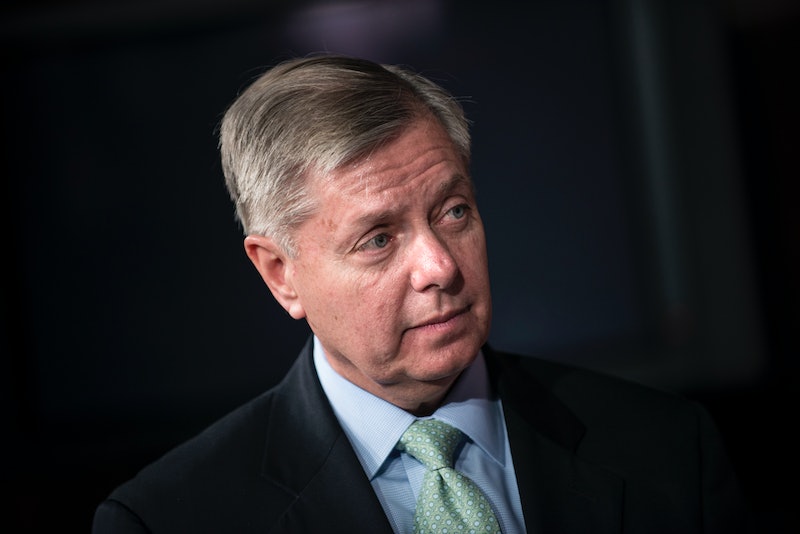 Yet again, there's a very concerning 20-week abortion ban working its way through Congress. Lindsey Graham reintroduced the Pain-Capable Unborn Child Protection Act in the Senate Thursday, after the House of Representatives passed the bill in May. The bill, which aims to ban abortions after 20 weeks of pregnancy unless the mother's life is in danger or in cases of incest or rape, failed in the previous Congress; now, Republican representatives are trying to bring it back to life. Legislation that would limit women's reproductive choices is cropping up all over the country, and there are countless other troublesome anti-abortion bills that might pass soon.

The 20-week ban debate is mostly split down party lines, with Democratic representatives opposing the legislation. The bill speculates that fetuses are capable of feeling pain as early as 20 weeks, and therefore abortions should not be performed after that period; the wider medical community has consistently debunked this theory.

Democratic Senator Patty Murray said in a statement to Bustle: "It’s deeply disappointing that, once again, Republicans are showing that they care more about scoring political points with their extreme base than they do about women’s health and rights. This unconstitutional restriction on women’s reproductive options, which we’ve seen all too often in states across the country, would allow politicians to interfere in the most personal medical decisions a woman makes, and it would put women’s lives at risk."

Here are four other worrisome anti-abortion bills throughout the U.S. that might become law.

Republican Senator David Vitter introduced the Pregnant Women Health and Safety Act in January, which would require all abortion providers to have admitting privileges to a local hospital. The bill is still in committee in the Senate, but could potentially be voted on.

Senator Vitter was on a roll in January, also introducing the Abortion Non-Discrimination Act of 2015. The "non-discrimination" title is misleading, as it aims to protect healthcare providers who refuse to perform abortions even in cases of emergency. This bill would allow health insurance companies, hospitals, providers, and others to ignore laws requiring them to perform abortions in cases of incest, rape, or when the mother's life is in danger. It's also still in a Senate committee for the time being.

Missouri currently has multiple bills in the works — HB 99, HB 774, HB 814 — that would require written notice be given to both parents of girls under the age of 18 seeking to have an abortion. The state already requires the consent of one parent for minors to obtain an abortion, so these bills would only make the process more difficult for girls.

A Washington state bill introduced in January would establish fertilized eggs, embryos, and fetuses as people and give them full legal rights if passed. The bill has been reintroduced twice since January, but luckily has not made much progress yet.