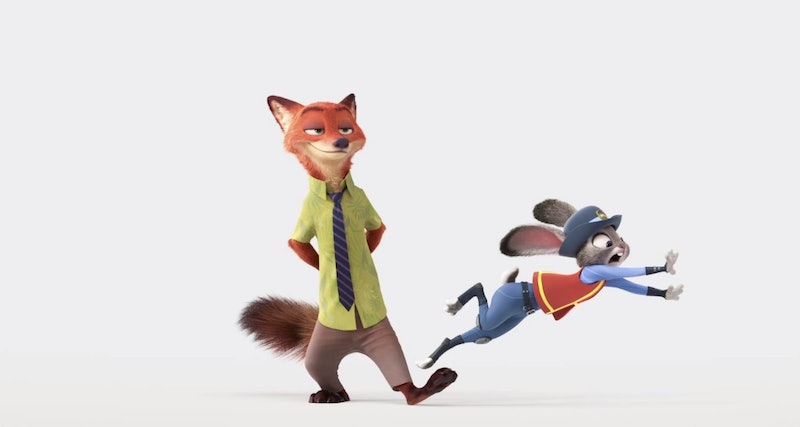 I know no one is over Frozen yet — and if you are anything like me, you still wish Big Hero 6's Baymax was your best friend — but take note: a new Disney movie called Zootopia is on the way, and it is so going to be your next obsession. How do I know this? Behold: The teaser for Zootopia just dropped, and it is beyond adorable.

The plot has instant classic written all over it: The movie is set in a world where humans never existed so animals reign supreme. They have jobs, houses, and personal lives, but they also still adhere to their natural instincts in some ways. Predator and prey lines still exist — although, it's worth noting this is not going to be some sort of animal thunder dome. At the heart of the movie is fox Nick Wilde (Jason Bateman) and rabbit Judy Hopps (Ginnifer Goodwin). Just like any fox and rabbit, they are not big fans of each other — but the movie's plot forces them into a situation where they become unexpected BFFs. (I told you the plot is adorable.)

Based off of the trailer, Zootopia manages to feel modern and classic at the same time. The movie seems to be taking Disney back to a time when talking animals were the trend du jour, but everything is very tongue-in-cheek: the trailer even trots out the word "anthropomorphic," and inserts a fox-with-his-fly-down joke. Like all good Disney movies, Zootopia looks poised to charm kids and adults with its witty antics.

Face it, we are all destined to love Zootopia and here's why.

Nick is a con artist fox. Judy is a by-the-books cop/bunny rabbit. When Nick is framed for a crime he didn't commit, these two unlikely friends have to help each other out in order to crack the case — so, in other words, it's a buddy cop movie with talking animals. Who doesn't want to see that?

Bateman has a droll sense of humor that already shines through in the teaser. Just imagine how hilarious he will be when the full trailer drops!

3. The Film's Universe Is Crazy Expansive

While the teaser is short on visuals, Zootopia clearly takes place in a huge world. Nick and Judy are going to be adventuring through rural bunny habitats and swanky Sahara Square — and Zootopia itself seems to be a melting pot of cultures, a la New York City. Any time a movie goes the extra mile to build an actual, complex world it gets bonus points from me.

The teaser doesn't talk down to the audience. It's wonderfully self-aware in a way that guarantees it will reach a broad audience. Come on, it drops the word "anthropomorphic" like it's no big deal!

6. The Creative Staff Is Awesome

7. Judy Is A Badass Hero

In an interview with USA Today, Moore described Judy as "a little Pollyanna mixed with Furiosa." She also carries around a tranquilizer gun. Could she, perhaps, be the world's most feminist rabbit? I can't wait to find out.