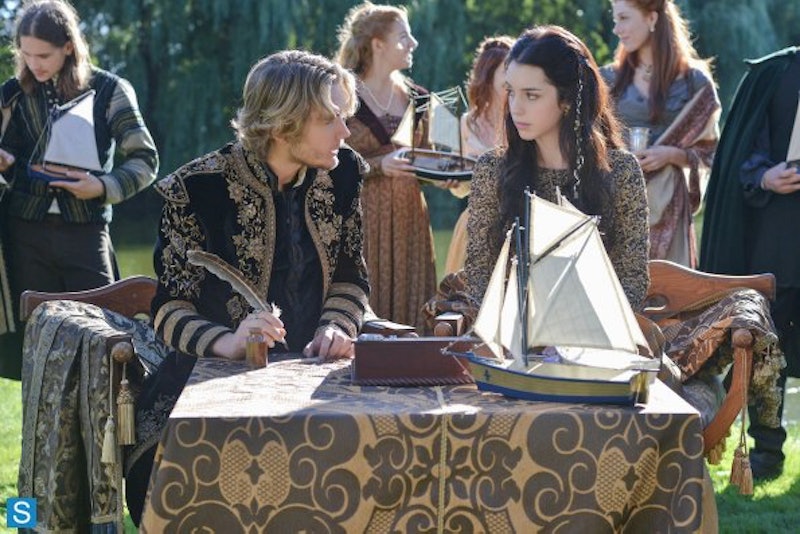 This week's Reign, the vaguely titled "A Chill in the Air," introduces a fun frenemy for Mary: Olivia, who you'll just love to hate. Things are getting sexier and sexier in the French court, as everyone but our dear virginal queen seems to be getting some. (Poor Mary gets some racy kiss action, but you know she won't let it go further… for Scotland.) Let's break it down.

Here's the backstory on Olivia and Francis, in a nutshell: They used to do it. Okay, it's a little more complicated than that. They were kind of in love and she was his first. She left court to get married and Francis was pretty bummed, but then Mary showed up and he's gotten over it. Now, Olivia is back, explaining that her marriage agreement fell through when the groom-to-be heard through the grapevine that she was used property, because this is the 16th century and double standards abound. She comes back to French court, hoping to woo Francis into marrying her, or at least taking her as his official mistress. Francis declines, but he'll probably change his mind next week, seeing as how he saw Mary and Bash making out and all.

Mary and Bash made out

Finally, the third side of this triangle is getting in the game. I'm sure there will be a lot of Mary/Bash (Bary? Mash?) 'shippers out there, especially after their passionate kiss this week. Plus, Bash is obviously the good guy, right? Francis is kind of an asshole (even though he's trying really hard to change for Mary and props to him for that). Unfortunately for Bash, Mary is kind of a Super Queen and she never puts herself ahead of her country. I'm not usually pro-virginity, and I totally share Mary's frustration that Francis can go do whatever (and whoever) he wants while she's forced to play little miss perfect, but I do admire her dedication to her country as their queen. I hope she holds out, at least for a while, on the whole sex thing. Although, with the way Reign is going, the Christmas episode will be called something like "Ye Old Orgy," so who knows?

Kenna is the King's new mistress

Everyone but Mary seems to know that Kenna is the King's new mistress, and who better to break the news to her than the Queen, who also uses the opportunity to plant some seeds of distrust between Mary and Francis, because Queens get cheated on, like, all the time.

Greer finally gives in to the kitchen boy

Remember that kitchen boy who has been chasing Greer, like, forever? Oh wait, it's only been like two episodes? Feels like longer. Oh well, the point is Greer finally gave in and made out with him (and probably more, which is an impressive pace for a girl who was a kiss virgin just a few weeks ago). Get it, girl. She insists that she's going to go off and marry someone else and be rich and noble and no one can ever know about them, but I think she's going to fall totes in love. Totes.

The Queen is plotting with Olivia

Since the Queen gets off on making Mary's life miserable, I'm going to go ahead and count this as her sexy time. It turns out she's the one who orchestrated Olivia's return to court. She's looking to set Olivia up as a mistress, get her knocked up and get Francis to marry her because she really believes Nostradamus' prophecy about Mary leading to Francis' demise. It's kind of a hail mary (LOL), but it is spicing things up in court.

She's also intercepting Mary's letters after catching the lady in waiting that everyone forgets (Aylee) stealing from Mary. In a blink-and-you'd-miss-it-scene, however, Mary and Aylee chat about the whole thing and Mary once again proves just how cunning and awesome she is. She set Aylee up to get caught with her ring, knowing the Queen would want her letters, which she's writing more for her secret reader than the official recipient, her mother. Also, she's totally suspicious that the Queen played a role in Olivia's return. I love Mary more and more every week, especially when she's using deductive reasoning, or lecturing her playboy fiancé about mutual respect in relationships.

What did you think of this week's Reign? Which couple(s) are you 'shipping?