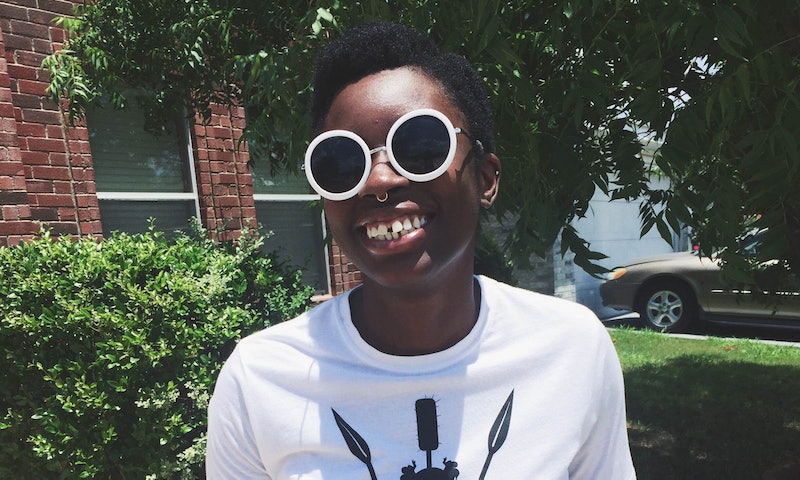 When I was in the 10th grade, a boy who said he liked me told me that I would be pretty if I just straightened my teeth. I didn’t tell him to get out of my face and keep his opinions to himself — I just closed my mouth, because at the time, I believed him. He hadn't said anything I hadn’t already been telling myself over and over for years.

Before anybody else ever said anything about my teeth, I had already internalized the idea that there was something wrong with them. I looked at the teeth of people in magazines, movies, and television shows and thought that because my teeth weren’t perfectly straight, they were ugly. Even as dentist after dentist told me I didn’t actually need braces and my parents insisted that gaps were a sign of beauty in Nigeria, I couldn’t stop hating my teeth. By middle school, when other kids began taunting me and telling me to get braces, I only got upset because I believed they were right.

By freshmen year of college, I only smiled with my mouth closed. But then one day, a friend trying to take a picture with me refused to take it unless I smiled with my teeth. I hesitated and then awkwardly smiled (smiling like that felt unnatural to me at that point). When I saw the picture, I was shocked to realize that I actually have a nice smile. That moment was the push I needed to begin really smiling again.

I was not alone in my early dislike of my physical appearance. By the age of seven, most children have already begun to show dissatisfaction with their looks, and one in four have already begun "dieting" of some sort. Those insecurities don't just go away on their own. When society has you internalizing negative feelings about your appearance at such a young age, it takes years to undo the damage. While my insistent friend was the push I needed in the right direction, it still took me time to understand that society's standards of "beauty" are often classist, racist, sexist, and generally tied to privilege. There are times when I still feel uncomfortable about my teeth, but now that I understand that there's more than one way to define beauty, I view my smile as a gift from my mother's side of the family.

Learning to love your appearance is part of the ongoing process of unlearning all the ways society tells you to hate yourself. But no matter where you are in the process, you’re not alone. I talked with a few women about the physical features they used to hate, but now embrace. None of us are claiming to be perfectly in love with everything about ourselves, but this is where we are in accepting ourselves, “imperfections” and all.

"Growing up, I felt self-conscious about my schnoz. Classmates sometimes made fun of me, and my mother's well-meaning offer of a nose job down the road did not help. Then, halfway through high school, I realized there was really nothing out of the ordinary about my nose and in fact it was a badge of my ethnic heritage that I should wear proudly. When I was 18 I got a nose ring, which I thought made my nose look kind of sexy. I'm 33 now and the nose ring is still with me."

"My cheeks! The fact that they're so huge used to bother me because they make my eyes look tiny when I smiled. I used to think I looked like a baby. Now, not so much."

"As a child I was teased for many a thing. I was too fat, too smart, my hair was too short, my eyes were too big, etc. While I'm still working through much of the damage, I've grown to appreciate a few of the features I was often teased about.

Growing up, kids teased me a lot about my forehead and my neck. I was often called fivehead and turkey neck. It was hurtful and quite shaming. I wore bangs for a while and hated pulling my hair back. I now refuse to believe that my forehead is really that big. And my neck matches my full face and bigger body. These features are a part of me, and there is no shame in any part of my person."

"For me, it's my (quite frankly, massive) ass. I used to hate the constant comments about it, and the fact I can't wear a pair of jeans more than five times before they split at the crotch, and the fact I'm forever knocking things over when I squeeze past. I actually got stuck in between my table and the wall at a restaurant when trying to get into my seat; the waiter had to come and free me. My reason for loving my ass now is simple: Kim Kardashian. Blast the woman all you want, society, but I will never stop loving her."

"I was self conscious about my hips as a young teenager — I was skinny everywhere else, then BAM! massive hips. We used to call them 'scissor hips' because they kind of jutted out and my P.E. nickname was Duct Tape because that sure would have helped during those jiggly cross country practices. Now that I'm in my mid-20s, the rest of me is fat enough for 40-inch hips to 'make sense.' It's not so bad now I guess? #ThickaThanASnicka."

"My arms and legs. I felt they were muscular, fatty, and weren't smooth like model arms and legs, and I stayed wearing jackets and pants. It wasn't until undergrad that I embraced them for various reasons. My left arm has a deformity from birth. It was hard using it growing up and I would always wear a jacket to hide it. Mom always encouraged me, and I'm a lot better."

"I have naturally big, wavy brown/auburn hair. I hated it growing up around a lot of petite girls with perfectly straight blonde hair, and I was a tomboy with what felt like a mass of frizz on my head. I tried to straighten it for about a month. I'm lazy and couldn't figure out how to do it properly. I wanted to dye it but my mother would never let me (wise move, Mom). Now that I'm older I love that my hair suits my personality and is actually low (no) maintenance. It's OK to be a little curly."

"I used to feel insecure about my youthful face. I thought that if I looked too young, people wouldn't take me seriously. My worries intensified after I decided that I want to be an attorney. But, I realized that my youthful look also makes me appear more approachable, kind, and genuine (these are not the stereotypical attributes given to attorneys). And that's good thing, because I want my future clients to trust me and know that I'm committed to serving them."

"I played a lot of sports in high school and developed pretty muscular thighs. But my sister is what my family calls 'model-skinny and model-pretty.' She really is gorgeous. So I used to hate that she was so slim but I had these huge thighs. After a few years, I've grown to love my muscular thighs and still try to keep their muscular definition by running often."

"When I was in elementary school a lot of the kids in my class would make fun of my collarbones. They would say they made me look sickly or 'like those starving children in Africa, y'know the ones in the commercials on TV.' Now, I love them. I feel like they accent my physique really well and give my features strength and definition."

"As a teenager, I really hated my nose. I have a bit of a hook nose and it took me a while to grow into it — for a long time, it just felt like it was way too large for my face. I always envied people who had small 'button' or 'ski-lift' noses. Their noses just seemed cute, feminine, and beautiful while mine felt awkward and masculine. It doesn't help that my mom, who is absolutely beautiful, has exactly the 'perfect' nose I've described and I instead inherited my dad's big Zepeda nose.

Now that I'm in my twenties though, I actually love my nose. I have pretty small, thin features otherwise and I think my nose is distinctive and gives my face character. It's a strong nose and I'm proud of it."

"I disliked my natural hair because growing up, I had heard people describe it as 'rough,' 'unkempt,' and 'bush' or 'primitive.' I embrace it now because I know better."

"My hair. It was always tangled and I never knew what to do with it as a kid. I grew up and learned to appreciate the volume and its versatility."

"Thunder thighs. I've played soccer and volleyball my whole life so they were inevitable. I hated that my shorts rode up, my pants never fit (the bigger size for my thighs was loose on the waist, and belts created a ruffled look) but now, I embrace them. They're hella sexy. Plus, 'thunder' is such a strong and empowering word, I'm like 'yesssss.'"

"My freckles! When I was little, kids would ask me why I had so many black spots on my face. They would comment that black people don't have freckles and that I looked weird. It affected me so much that I actually had one of my moles removed. But I've learned to embrace them and love them and see the beauty of those dots across my face."

"I have hairy arms and I used to wear sweaters all the time in the Texas heat. My mom promised me that the hair would one day magically fall off my arms, friends offered to wax my arms for me, but nothing changed. I don't even notice them much these days... I've come a long way from middle school."

"Big forehead. I was made fun of in school and grew extremely insecure because of it. I used to hide behind relaxed hair bangs and head bands. So I went completely natural and completely bald to make it more visible. That's when I realized I was trying to define African beauty with European standards."

As the poet Nayyirah Waheed wrote, "I found flaws and they were beautiful." May we all find the ability to not only forgive our flaws, but embrace them.

More like this
I Have Eyebrow Alopecia – & Microblading Gave Me My Confidence Back
By Jessica Morgan
Aesop's Queer Library Is Open
By Tomi Otekunrin
Yes, You Can Buy Off-White’s New Beauty Range In The UK
By Tomi Otekunrin
Glossier’s New Olivia Rodrigo Campaign Is Giving ‘90s Groovy Chick
By Tomi Otekunrin
Get Even More From Bustle — Sign Up For The Newsletter