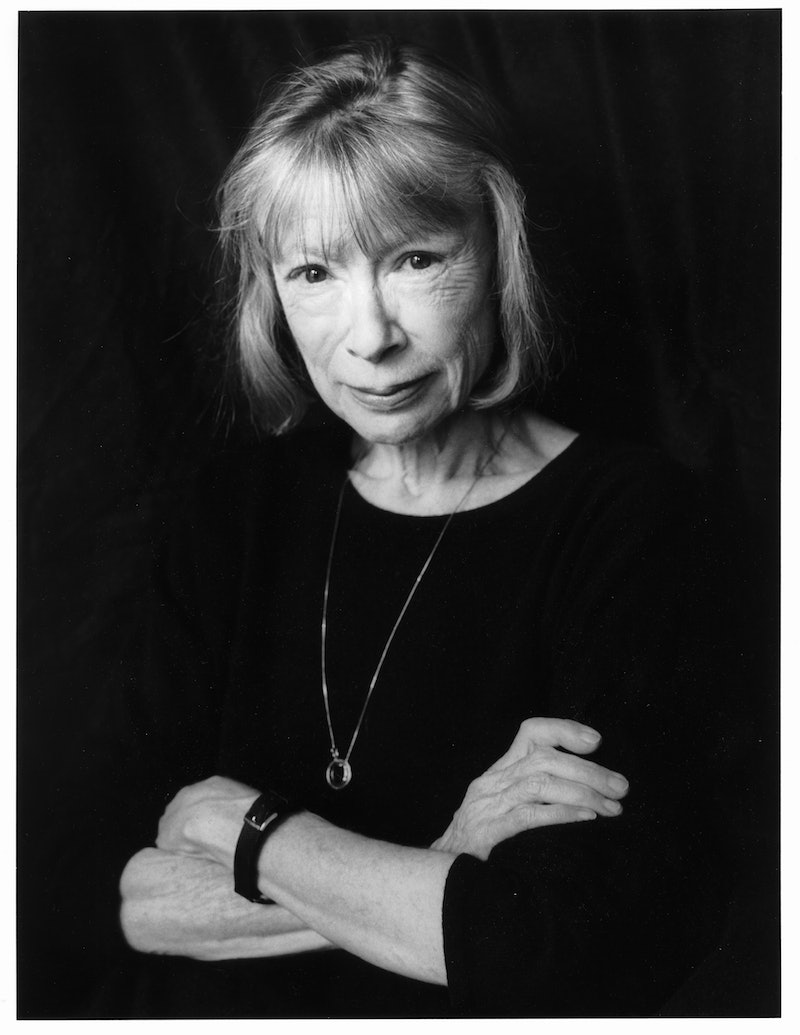 When I first read one of Joan Didion's essays in high school, I rushed to the nearest bookstore and bought both Slouching Towards Bethlehem and The White Album, two collections of nonfiction. Both books focused on California in the 1960s, an alien culture completely alluring for a teenage girl from Georgia. At the time I was determined to be a writer — an essayist — like Didion. I had a notebook I carried with me everywhere. When I read Didion's essay, "On Keeping a Notebook," in Bethlehem, I knew she was speaking directly to me when she wrote that keeping a notebook is not so much about having an accurate account of what had happened, but rather, "remember what it was to be me: that is always the point." It was the first time I had correlated writing with self-discovery.

Now Didion is more than a literary lion. She is a cultural icon. Her early work exudes confidence; her later memoirs speak to the wisdom that comes with experience. Some have said that loving Joan Didion is "a trap," as Molly Fischer wrote for New York magazine, "the 19-year-old writer’s fantasy version of herself," but I don't think this version is such a poor aspiration for the young writer. Didion may be the young writer in sunglasses, smoking and drinking bourbon in Los Angeles. But she is also the fierce writer of The Year of Magical Thinking and Blue Nights , the older, wiser woman who, at the age of 80, still maintains the cool of her younger self.

If loving Joan Didion is wrong, I don't want to be right.

Shortly after reading my first Joan Didion essay in high school, I did a Google search for her image. I wanted to see what she looked like. The photograph of Didion standing and smoking in front of a Corvette in a clingy dress is infamous. In this picture, Didion looks fearless and sexy. There's nothing more sexy than confidence, and in this photo Didion has it in spades. Who knows why Didion felt the need to pose in front of this muscle car, blowing smoke into the photographer's face. Who cares? The photographer Julian Wasser said of Didion: "She was a very heavyweight person."

In her 1979 book, The White Album, Didion shares her packing list, which she kept taped to the inside of her closet door when she would have to travel with short notice as a full-time journalist. She writes:

The list enabled me to pack, without thinking, for any piece I was likely to do. Notice the deliberate anonymity of costume: in a skirt, a leotard, and stockings, I could pass on either side of the culture. Notice the mohair throw for trunk-line flights (i.e. no blankets) and for the motel room in which the air conditioning could not be turned off. Notice the bourbon for the same motel room. Notice the typewriter for the airport, coming home: the idea was to turn in the Hertz car, check in, find an empty bench, and start typing the day’s notes.

The fan of Didion’s work will find fetishistic glee in this list, which includes cigarettes and bourbon, “robe slippers,” tampax, and “a typewriter.” Do I even need to mention why these essentials make her the coolest? No. No, I do not.

Like the packing list, Joan Didion's writing rituals are just as cool. In a 1968 interview with The Paris Review , she says:

I need an hour alone before dinner, with a drink, to go over what I’ve done that day. I can’t do it late in the afternoon because I’m too close to it. Also, the drink helps. It removes me from the pages. So I spend this hour taking things out and putting other things in. Then I start the next day by redoing all of what I did the day before, following these evening notes. When I’m really working I don’t like to go out or have anybody to dinner, because then I lose the hour. If I don’t have the hour, and start the next day with just some bad pages and nowhere to go, I’m in low spirits.

Most people I know, writers or not, would love to have an hour alone with a drink before dinner to decompress. What makes this description of Didion’s habits so unmistakably cool is that she puts her work and her needs above all — “I don’t like to go out or have anybody to dinner because then I lose the hour.”

Didion is also the author of a number of screenplays with her husband, John Gregory Dunne. Together the two wrote The Panic in Needle Park (1971), Play it as it Lays (1972), A Star is Born (1976), True Confessions (1981), and Up Close and Personal (1996). But perhaps what is even cooler about the screenplays they wrote that went on to become movies are the ones that didn’t. “We were doing a crash rewrite on a picture that never got made,” Didion writes in The Year of Magical Thinking. (Note her insider use of the word “picture” instead of movie or film.) “It was one of those Christmases on which we exchanged not ‘presents’ but small practical things to make a tree.”

So many of Didion’s memories of her time with John Gregory Dunne revolve around meals — more specifically, the many restaurants they frequented together. One particularly charming anecdote involves the PSA “Midnight Flyer,” a flight from San Francisco to Los Angeles for just $30.

In The Year of Magical Thinking, Didion writes, “once in 1968 when I needed unexpectedly to spend the night in San Francisco (I was doing a piece, it was raining, the rain pushed a late-afternoon interview to the following morning), John flew up to Los Angeles so that we could have dinner together.”

Perhaps the only thing more romantic than traveling to rainy San Francisco for work is having your husband fly there simply so you could have dinner together.

Didion’s account of her wedding to Dunne in The Year of Magical Thinking:

We were married on the afternoon of January 30, 1964, a Thursday, at the Catholic Mission on San Juan Bautista in San Benito County, California. John wore a navy blue suit from Chipp. I wore a short white silk dress I had bought Ransohoff’s in San Francisco on the day John Kennedy was killed … my intention for the ceremony had been to have no entrance, no ‘procession,’ to just stand up there and do it … Nick got the plan, but the organist who had materialized did not, and suddenly I found myself on my father’s arm, walking up the aisle and weeping behind my dark glasses.

For many, John Didion is the writer most often associated with Los Angeles. This is because she lived there for many years, and wrote screenplays — so she was associated both with California generally and with Hollywood, too. In the 1979 New York Times review of her latest collection of essays, The White Album, Michiko Kakutani wrote, "California belongs to Joan Didion." The White Album, named for the Beatles record of the same name, discusses Didion's time in California, touching on major cultural touch-points like the Manson murders, Bob Dylan, and other rock stars of the time.

"It was six, seven o'clock on a early spring evening in 1968 and I was sitting on the cold vinyl floor of a sound studio on Sunset Boulevard, watching a band called The Doors record a rhythm track."

Wait, what? Joan Didion sat in on a Doors recording session? Finally, Jim Morrison, in his black leather pants, shows up.

"Morrison sat down again on the leather couch and leaned back. He lit a match. He studied the flame awhile and then, very slowly, very deliberately, lowered it to the fly of his black vinyl pants . . . There was a sense that no one was going to leave the room, ever. It would be some weeks before The Doors finished recording this album. I did not see it through."

Joan Didion, ladies, too cool for The Doors.

Young women identify strongly with Joan Didion because of her impenetrable coolness as a writer — but also for her ability to put that confidence into words. (I mean, she walked out on Jim Morrison.) Didion claims that to practice self-respect, one must experience it, through remembering who we are. As Didion writes in "On Self-Respect" in Slouching Towards Bethlehem, “to have that sense of one’s intrinsic worth which constitutes self-respect is potentially to have everything: the ability to discriminate, to love, and to remain indifferent.”

For a young person, this is a very important concept. Didion writes that her whole world nearly collapsed when she was not elected to Phi Beta Kappa. According to Didion, self-respect is a practice. "That kind of self-respect is a discipline, a habit of mind that can never be faked but can be developed, trained, coaxed forth."

In 2003, after Didion lost her husband John Gregory Dunne, she didn’t write for nearly a year. In the resulting book about Dunne’s death, The Year of Magical Thinking, Didion also writes about the mysterious illness of her daughter, Quintana Roo. Unbelievably, two years later, in 2005, at the age of 39, Quintana also died. Though the circumstances around Quintana’s death are still unclear, in Blue Nights, Didion returned to the only thing she knew how to do, the thing, as she writes in Magical Thinking, she has always known how to do: to write.

I can't imagine the emotional fortitude it took for Didion to relive not only the death of her husband, but also the death of her daughter. The resulting memoirs are not only beautifully written, they stand to comfort those who have also experienced loss. They say there is no "normal" way to grieve. There is nothing normal about grief.

This past year, the French fashion label Céline revealed its latest cover girl: Joan Didion, sporting a pair of black sunglasses. Vogue called Didion “the immortal intellectual and otherwise dream girl,” furthering her impenetrable cool. In a society where youth and beauty seem to be valued above all else, for Céline to choose Joan Didion as their cover girl, was, well, nothing short of awesome. I remember the day the image was released, the Internet was abuzz with positivity, not only about their choice of Didion, but also about Didion's work, her legacy, and overall the feeling was, "what a badass."

Joan Didion is cool because she remains, after all these years, Joan Didion. She is now the subject of a Kickstarter campaign that hopes to fund a documentary about her life directed by her nephew Griffin Dunne, and the subject of an official biography, The Last Love Song, clocking in at 672 pages and due to publish in August. Joan Didion’s appeal as a writer and icon shows no signs of fading. If being true to yourself, (“I have been a writer my entire life”), also means being impenetrably cool, then so be it. I’m a proud Joan Didion fangirl.