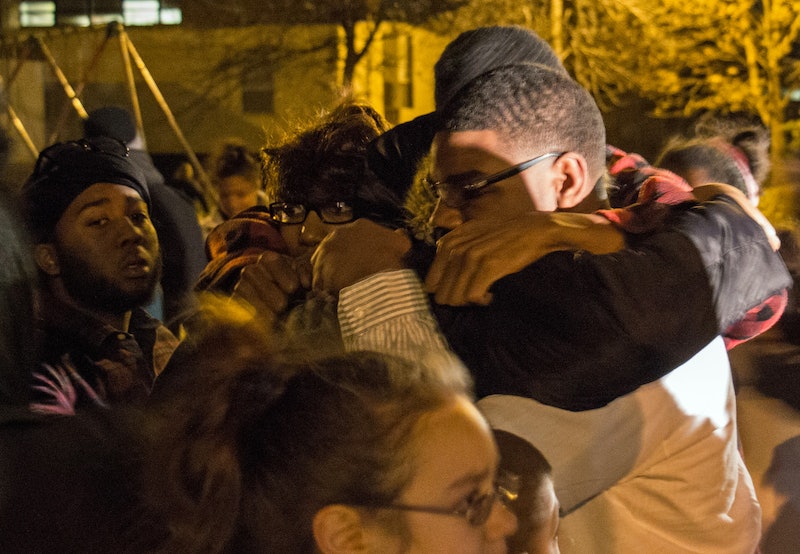 The aftermath of the death of 12-year-old Tamir Rice, shot by a police officer in November while waving a toy gun missing its orange "fake" marker, has been riddled with questions: Would anybody be charged? Would Cleveland see protests like Ferguson's? After more than six months of legal silence, a group of frustrated activists and local lawyers demanded a judge look at the case using the evidence available, including a video of Rice's death. That judge, Ron Adrine, ruled that there were grounds to charge Officers Timothy Loehmann and Frank Garmback with murder, involuntary manslaughter, or reckless homicide.

What does this mean? Well, what it doesn't mean is that the officers will be charged automatically. Adrine doesn't have the authority to do that with this case; his ruling is technically more of a recommendation than a hard-and-fast rule. What this ruling is put pressure on the city to arrest the officer or officers involved on charges of murder — and the city's prosecutors have already faced a great deal of pressure to do so since Rice's death in November, which sparked protests across the city.

Even if the prosecutor's office does want the officers charged with murder, it doesn't have the ultimate authority to do so: A grand jury must formally agree that there's cause to charge the officer or officers involved with specific crimes. In a statement to the New York Times, the office said: "As with all other fatal use of deadly force cases involving law enforcement officers, [the case] will go to the grand jury."

The family of Tamir Rice is appreciative of their attorneys, Walter Madison, Benjamin Crump and Daryl Parks along with the efforts of the "Cleveland 8" who exercised civility and intellect by invoking Ohio Citizen Participation laws Tuesday to effectuate arrests of the officers responsible for the shooting death of 12-year-old Tamir Rice.

The "Cleveland 8" has provided a blueprint for the nation to follow in addressing many of the relationship problems between African-Americans and Law Enforcement.

Judge Ronald Adrine heard the pleas of the Cleveland 8, took into consideration the affidavits provided and determined there was probable cause to issue a warrant for Officers Loehmann and Garmback. We are grateful that the wheels of justice are starting to turn.