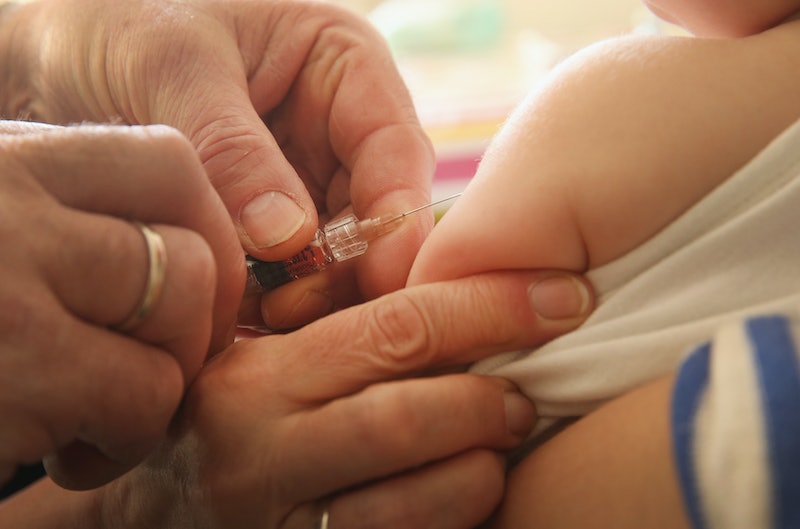 The American Medical Association threw down in a big way this week on the subject of vaccination exemptions, and by the sound of things, they mean serious business. At an annual meeting in Chicago on Monday, the House of Delegates for the American Medical Association voted to end non-medical vaccination exemptions for school-aged children, which, if turned into law, would make religious and so-called "personal belief" exemptions illegal. Their reasoning? In short, Forbes reports that the AMA found no true scientific basis for non-medical exemptions, and those who choose not to vaccinate their kids are putting the public's health at serious risk.

As for any loopholes to the policy, an AMA press release Monday clearly stated that there should be none:

New AMA policy recommends that states have in place an established decision mechanism that involves qualified public health physicians to determine which vaccines will be mandatory for admission to schools and other public venues. States should only grant exemptions to these mandated vaccines for medical reasons.

This is all pretty big news, considering the AMA represents the largest association of medical doctors in the United States, with over 538 delegates in total that head up state medical societies as well as various specialty doctor groups. In other words, they pack a serious punch in Washington, so if a bill did make its way there, it's much more likely to pass.

The vote also comes hot on the heels of other big anti-vax news: on May 15, California lobbyists successfully passed Senate Bill 277, which bans the "personal beliefs" exemption. While it will be some time before that bill becomes state law, its passing is super significant, since the anti-vaccination movement has become increasingly common in California. It also comes after the large-scale measles outbreak that hit Disneyland last December, causing 130 park-goers to become ill. And based on the words of some AMA delegates, it's pretty clear that the outbreak, which was only officially declared "over" two months ago, was a huge catalyst in making the vote happen.

As evident from the recent measles outbreak at Disneyland, protecting community health in today’s mobile society requires that policymakers not permit individuals from opting out of immunization solely as a matter of personal preference or convenience. When people are immunized they also help prevent the spread of disease to others.

Immunization programs have been in place in the U.S. for decades, and according to the AMA, they've successfully controlled (and in some cases, completely wiped out) the spread of illnesses like smallpox, measles, mumps, rubella, diptheria, and polio. But over the last 10 years, the anti-vax movement has been steadily growing in certain parts of the country, allowing once-dormant diseases to make a comeback — particularly in California. Just take a trip to the California Waldorf School, where the Pacific Standard reported last month that students are actually ostracized for supporting vaccines. Or swing into any kindergarten class in LA County — where parents are opting against vaccinating their kids at more than twice the rate they did seven years ago, according to the LA Times. (This is particularly problematic since it threatens "herd immunity" in the classroom, which basically means that 92% of a population has to be immunized in order to prevent outbreak.)

For many parents who choose not to vaccinate, the decision comes down to one overriding fear: that vaccinations may cause autism. However, as AMA members reiterated during the meeting this week, more than 100 reports and scientific papers have proven there is no link between autism and vaccinations, and exemptions should therefore not be recognized. "These exemptions are used for convenience," stated AMA board member and public health physician Dr. James Felden, who then added, "It's such a no brainer. You're protecting the kid next to you."