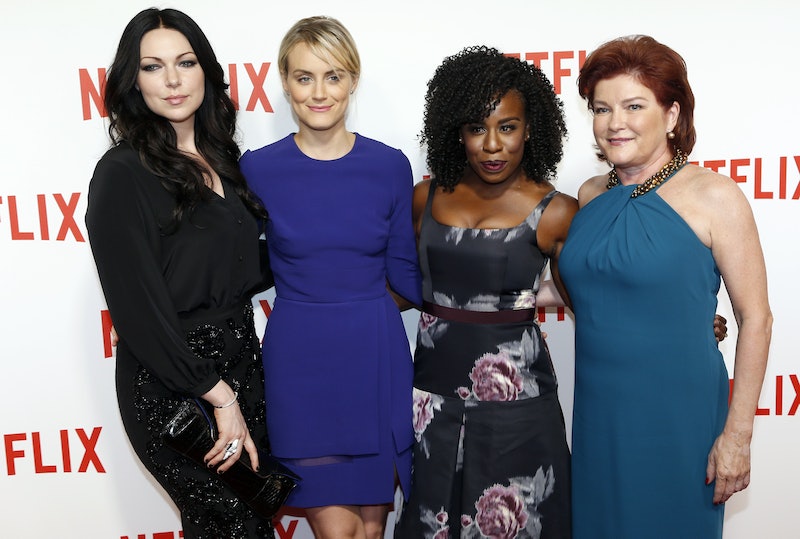 Before you can say “I hope my couch is OK with me camping out on it all weekend, because I have some serious TV to watch,” Orange Is the New Black will be back. The third season of the award-winning series will be added to Netflix this Friday, and thank goodness. Fans like yours truly have waited a year for answers to burning questions (e.g., IS VEE ALIVE?), and we've also waited a year to reunite with the wonderful characters. It's nearly impossible to say which Litchfield inmate I've grown most attached to, but it doesn't seem it's that way for everyone: in a recent interview with Bustle, Orange Is the New Black star Uzo Aduba addressed the nearly impossible question. When asked to pick her favorite OITNB character other than Crazy Eyes, the Emmy-winning actress didn't name a single character; Aduba named the show's subject matter, and proved herself to be a wonderfully supportive cast mate.

“I feel like what has been exciting for me when I watch the show is to see so many different shades of women reflected back,” she told Bustle. “So I wouldn't say that I’m not drawn to any one — I’m drawn to them all because they’re all so complex. It’s unlike anything I’ve ever seen.”

The show truly is in a league of its own. Its cast is diverse and predominately female (if you're new to this planet, allow me to be the first to tell you that is not exactly the norm), and the characters are anything but two-dimensional. Furthermore, the actors who bring these richly drawn characters to life are terrific; at the 2015 Screen Actors Guild Awards, OITNB won the award for Outstanding Performance By An Ensemble In A Comedy Series, and with great reason. The combination of brilliant writing and brilliant acting is unstoppable.

“I will sit and I will watch Red and just chew up that story; it’s thrilling to experience," she continued. "Or watching Taylor [Schilling], I mean, Piper through the prison walls, and I get so excited by that. Or I watch Adrienne [C. Moore]. I just get so excited by watching all these different types of characters grow.”

The characters don't just grow in their present-day stories; as the show goes on, their backstories are fleshed out. We learn that a fiancé isn't a fiancé, but a stalking victim; a cancer-stricken inmate spent her youth robbing banks; a young girl looking for a maternal figure wound up working for a drug dealer. With each turn OITNB takes, a new detail about a character is uncovered.

“Or Dascha [Polanco],” she added. “I mean, I’m just ratting off a list now, but I’m able to do it because they all excite me. Each of those women that I pointed out and I haven’t even scratched the surface. There are so many more, like Natasha Lyonne. I am gripped by them all … It’s exciting to watch those narratives play out.”

Right there with you, Aduba.

More like this
Adele’s All-Female Lineup Includes Kacey Musgraves, Mahalia, & Self Esteem
By Shahed Ezaydi
'Stranger Things' Fans Are Begging For Steve To Live For The Funniest Reasons
By Grace Wehniainen
Superman & Lois Season 3 Will Introduce A Complicated New Supervillain
By Brad Witter
Everything We Know About When To Expect The Rest Of The Upshaws Season 2
By Kadin Burnett
Get Even More From Bustle — Sign Up For The Newsletter