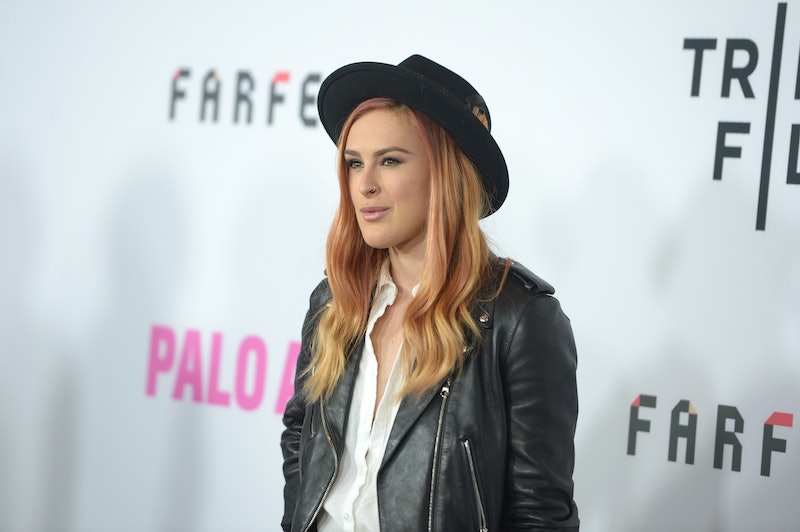 I do not envy the children of celebrities. Sure, they might get to enjoy some of the sweet perks that come with having famous folks (like tons of money and having Ryan Gosling attend your Sweet 16 birthday party, for instance) — but with those benefits come a whole lot of setbacks. One of those setbacks? Constant and unending scrutiny in the media. It's already painful for a person who is actively seeking out the spotlight to be criticized for everything from who they're dating to their dress size, but it's another challenge entirely when you're simply famous by association. Luckily, actress, Dancing With The Stars contestant, and daughter of A-listers Demi Moore and Bruce Willis has learned from the media's often-harsh criticisms, and is here to help positively influence others. Rumer Willis penned an essay for Glamour Magazine discussing confidence, empathy, feminism, and learning to love yourself — and it should serve as an inspiring reminder that everyone needs from time to time.

In the essay, Willis talks about how she was often bullied because of the extra attention she received from having famous parents. Specifically, she talks about how she was bullied not only in the tabloids, but by people on social media. However, after a stint on Dancing With The Stars recently taught her to appreciate herself and her body, she's now inspiring other people to do the same — while also importing we all treat others with respect and kindness.

Here are some of the most inspiring quotes from Willis' essay:

On Comparing Yourself To Others

So true — how often do we only measure our own success by what others have achieved? Focusing on yourself is the only way to stay happy.

Until recently the thought of making one misstep that could be criticized would stop me from trying new things and from standing up for myself... Then last year I decided to pose for a fashion shoot, and without my permission my face was photoshopped to appear thinner. I’d had enough and spoke out against it. I was done allowing other people’s perceptions of me to dictate how I viewed myself.

Major props to Willis for speaking out about someone altering her image without her consent. She's the one who should have final say in how she is presented in the media, and by not wanting to have her image thinned down for public consumption, she's telling young women everywhere that it's OK not to look like this so-called version of "perfection" that's constantly spoon-fed to impressionable women.

On What Really Makes You Beautiful

When you conquer something you didn’t think you could do, energy and confidence radiate out of you, and that’s more beautiful than if you were skinny or had the perfect face.

Confidence isn't about physical perfection: it's about kicking ass at something you love to do.

I remind myself that focusing on people’s negative opinions will only make me feel like crap. If I start to get discouraged, I take a step back and go, All right, I don’t feel great today, but what can I do to shift how I’m thinking? It’s difficult, but the moment you stop saying, 'I’m really fat,' or 'I’m ugly,' and just say, 'Wow, I have this,' then you’ll see a change.

As Willis describes, there's no magic pill for confidence. But, if you can change your outlook just slightly, you might find that you'll be happier in the skin you're in.

We all need to stop bullying ourselves and being cruel to other women. Attacking one another instead of supporting one another has become the norm. Life’s hard enough as it is. Let’s find strength in the fact that we’re different and unique. Let’s allow ourselves to say, "These are my flaws, but I’m still beautiful."

Be kind — to both others and yourself. It's the only way to achieve real happiness.

Be sure to check out the full essay over at Glamour .

More like this
Olivia Munn Got Real About How Her Body Hasn’t “Snapped Back” Post-Pregnancy
By Stephanie Topacio Long
Lizzo Changed The Lyrics Of “Grrrls” Amid Backlash
By Maxine Harrison
Adele’s All-Female Lineup Includes Kacey Musgraves, Mahalia, & Self Esteem
By Shahed Ezaydi
Inside The Wild, Contrived World of Staged Paparazzi Photos
By Tess Garcia
Get Even More From Bustle — Sign Up For The Newsletter