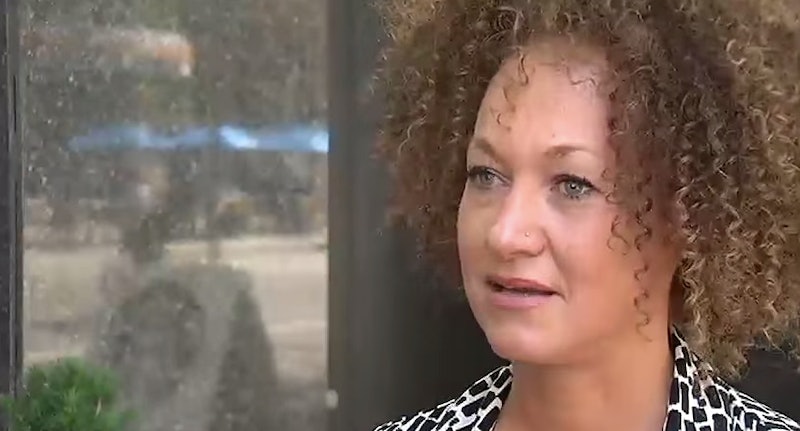 The story of a white woman allegedly passing as a black woman in Washington State has quickly escalated into one of the most bizarre stories to hit the mainstream media in years. Her parents, Lawrence and Ruthanne Dolezal, appeared to out her Thursday, telling local station KREM their biological daughter was white, just like they were. So, who is Rachel Dolezal, the NAACP chapter president?

Dolezal is president of the NAACP chapter in Spokane, Washington as well as an adjunct faculty member in the Africana Studies Program at Eastern Washington University. In September 2014, she became chair of the city's citizen police ombudsman commission, a position which actually sparked the deep look into her racial background. In a joint statement Thursday, Mayor David Condon and City Council President Ben Stuckart said Dolezal was under investigation for allegedly lying about her race on her application to join the independent commission. On the filing, Dolezal identified her race as African American. Condon and Stuckart said in a statement:

We are committed to independent citizen oversight and take very seriously the concerns raised regarding the chair of the independent citizen police ombudsman commission. We are gathering facts to determine if any city policies related to volunteer boards and commissions have been violated. That information will be reviewed by the City Council, which has oversight of city boards and commissions.

Questions about Dolezal's race were also prompted by several hate crimes she reported over the past several years, which were outlined by Idaho newspaper Coeur d'Alene Press. The allegations included harassing phone calls and a noose hanging in her carport rafters. In the most recent alleged incident, Dolezal claimed a packet of hate letters and pictures was sent to her at the NAACP's post office box, sparking numerous support rallies outside Spokane City Hall. Authorities investigating the hate mail said there were peculiar circumstances surrounding the incident, since the person who placed the packet needed to have access to the box because it was not processed through regular mail. Dolezal has denied she was responsible.

In an interview with KXLY, Dolezal appeared flustered and confused when directly asked whether she was black. A KXLY reporter asked her point blank, "Are you African American?" She replied, "I don't understand the question," and proceeded to walk off camera.

An active figure in the local civil rights community, Dolezal publicly identified herself as a black woman in multiple interviews and reports. Penning an Inlander column titled "Let Us Breathe," a nod to the death of Eric Garner, Dolezal identified herself as part of the black experience while discussing the Black Lives Matter movement. She wrote:

Her Facebook, which has since been deactivated, also included numerous posts of her representing herself as black, including a photo with an older black man who she called her father. According to Coeur d'Alene Press, the man is Albert Wilkerson, a former volunteer at the Human Rights Education Institution where Dolezal previously worked. A Spokane NAACP Facebook page also showed Dolezal posing with the same man.

In other Facebook posts, Dolezal shared photos with a young black man, identified as Izaiah, whom she claimed was her oldest son. Her parents confirmed to BuzzFeed News Izaiah was in fact her adoptive brother who went to live with her when he was 16. Though Dolezal became Izaiah's guardian, her parents continue to remain Izaiah's legal parents, according to Buzzfeed.

Dolezal's parents spoke with multiple media outlets Thursday to contest their daughter's race claims. Mother Ruthanne told Coeur d'Alene Press, "It is very disturbing that she has become so dishonest." A conversation with a KXLY reporter Thursday ended in Dolezal walking away from the interview after the following exchange, CNN reports:

Is that your dad?

This man right here's your father? Right there?

You have a question about that?

Yes ma'am, I was wondering if your dad really is an African-American man.

That's a very — I mean, I don't know what you're implying.

I don't understand the question of -- I did tell you that, yes, that's my dad. And he was unable to come in January.

Are your parents... are they white?

One thing is for sure: This definitely trumps Jeb Bush's mistake of marking "Hispanic" on a voter registration form.