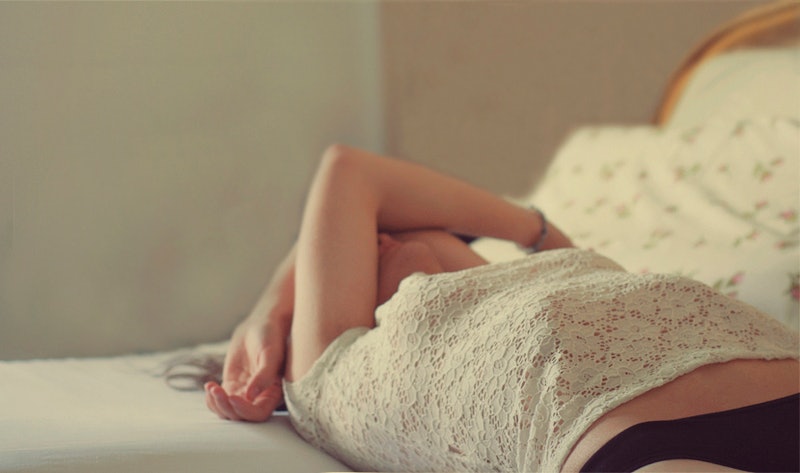 If listening to your friends boast about the earth-shattering orgasms they had this weekend leaves you silently picking at your cocktail, you're not alone — the inability to orgasm, which is known as anorgasmia, Coughlan's Syndrome or FOD (female orgasm disorder), is more widespread than you may think. And experiencing anorgasmia doesn't mean you're broken, frigid, crazy, or a failure at sex. As much as we'd all like to be Nicki Minaj and demand one orgasm for every one experienced by a partner, some of us simply aren't able to get to the top of the mountain.

Admitting that you can't orgasm can be a particularly alienating experience, no matter how long it has been going on. The female orgasm is no longer shrouded in mystery, and thanks to Samantha Jones and explicit sex scenes in mainstream films, we've embraced and emphasized it as a culture — so much so that life without it can feel both frustrating and depressing.

Well, feel frustrated no more. Anorgasmia is normal, it happens, and it can be solved. And don't panic if you haven't been able to orgasm recently — you may just be putting too much pressure on yourself. Even among women with hair-trigger orgasms, typically only two out of every three attempts to have an orgasm actually work out. Sorry, Nicki.

Still worried? Here's (almost) everything you've ever wanted to know about anorgasmia, but were too afraid to ask.

Anorgasmia doesn't mean that you're "damaged," sexually deficient, or will never achieve a big O. There's a huge range of possible causes for it — in fact, anorgasmia is actually more of a blanket term for a swathe of experiences and possible causes than it is a specific syndrome or disorder.

Unfortunately, modern media and pornography are chock full of images of the multiple-orgasm woman — and while it's great to celebrate women's orgasmic capacity, it can also make people who don't orgasm feel bizarre or alien.

Hell no. Anorgasmia in women is quite common. According to Susan Nolen-Hoeksema's Abnormal Psychology (sorry about the title, guys), almost five percent of women have reported a period of anorgasmia in their lives. And the real number may be much higher.

If you have situational anorgasmia, you're probably part a much bigger pool, too. According to Planned Parenthood, a third of women can't orgasm during sex, and 80 percent have problems orgasming through vaginal intercourse alone.

The answer to this one is tricky, because it depends on what kind of anorgasmia you've experienced. Some experts believe that several types of anorgasmia of can be traced back to psychological factors: having a bad sexual experience, believing that you don't deserve sexual pleasure, feeling anxiety, religious pressure, stress, relationship problems, and so on. Therapy and meditation are often suggested as a way of helping to deal with this stuff.

STDS, vaginal dryness, diabetes, chronic pain, and gynecological issues like endometriosis or ovarian cysts are all linked to anorgasmia, as are menopause and aging in general. And alcohol, smoking and drug abuse don't do anything great for your orgasm abilities, either.

And that's not even counting the possible orgasm-squashing potential of some medications, including anti-depressants and antihistamines. You may also, frankly, just not be sleeping with somebody who does your body right. Sometimes, it can genuinely be that simple.

4. Do Men Experience Anorgasmia, Too?

Yup! Orgasm disorders ain't just for ladies. Though there's been less research done about men's anorgasmia, it definitely exists, and is linked to a plethora of psychological and physical causes, just like women's anorgasmia. In many cases, anorgasmia in men seems to be closely tied to performance anxiety, but there's been a lot of progress: a new drug trialled in 2013 helped 69% (ha ha) of secondary-anorgasmic men improve their orgasms. Damn it, why can't it be that easy for us?!

5. Can Anorgasmia Be Cured?

The odds are good. If you go to see a GP for help without a specific cause in mind, they'll normally advise some general psychological help, so that you can untangle any mental health-based issues that might be getting in your way. They may put you in touch with a therapist or a person specializing in sex therapy.

Doctors will also try to identify any medical conditions that might be contributing, usually by doing a range of tests. These will probably include cardiac and neurological tests, checking your blood and vitamin levels, and analyzing your hormones, including your thyroid and your testosterone. If they notice any underlying conditions, then you'll develop a plan of action together.

If it turns out that your meds are causing it, a change in medication regime could be in order. If doctors notice a dip in your testosterone (which has been linked to lower desire and lower orgasm levels), they might try to prod that a little with medication. And estrogen therapy is often helpful for anorgasmic postmenopausal women.

The most important thing to remember is that you don't have to panic — or be embarrassed. You deserve orgasms if you want them (and, similarly, shouldn't feel ashamed if you don't). Know your sexual history, and don't be afraid to request a female doctor or go to a sexual specialist if that's what will make you more comfortable.

Anorgasmia is not a sexual death sentence. With a little work, you, too, can thoroughly annoy the neighbors with your screams of passion. So keep the faith!