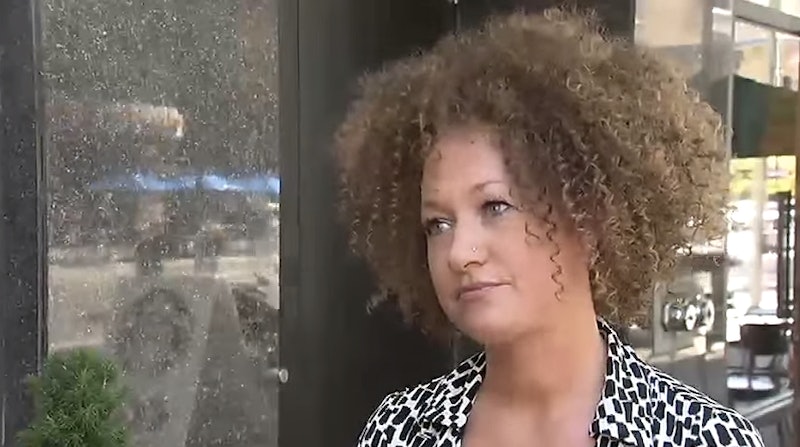 Twitter had a lot to say about the president of the Spokane chapter of the NAACP, who allegedly spent years posing as a black women when, in fact, her biological parents were both white. It's a really baffling story with a trail of social media evidence that Internet sleuths are unearthing. But this seems to be Twitter's biggest question Friday morning: Is Rachel Dolezal transracial? Is that even a thing? The Twitter masses seem to have spoken.

Alright, first let's turn to my good friend Merriam(-Webster) for a definition of transracial.

The usage example is "transracial adoption," i.e., a family that adopts children of another race, thus creating a family that extends across "two or more races." That seems to be a legitimate usage of the term. There have been plenty

stories written about transracial families, so the term is relatively accepted in that sense.

So can a biologically white woman who identifies as black be considered transracial? Does identifying as a different race from the one you were born into count as "involving, encompassing, or extending" race? Honestly, most of the Twitter users on the trending hashtag "transracial" don't think so.

Others stuck up for Dolenzal.

Of course there were people who compared Dolezal to — yes, I think you know what I'm about to say — Caitlyn Jenner. Yeah. That was coming.

But most people seemed to think that was an unfair comparison.

One thing's for sure: The debate over when it's appropriate to publicly identify as "transracial" isn't going away anytime soon.

More like this
Rachel From ‘The Circle’ Season 4 Isn’t Usually On TV Shows With “Living People”
By Justice Namaste
How To Fight For Reproductive Rights, Based On How Much Time You Have
By Courtney Young
LGBT+ Men Fleeing Afghanistan Were Denied Asylum By The Home Office, New Findings Show
By Sam Ramsden
The Music Industry Continues To Fail Black Women
By Precious Adesina
Get Even More From Bustle — Sign Up For The Newsletter