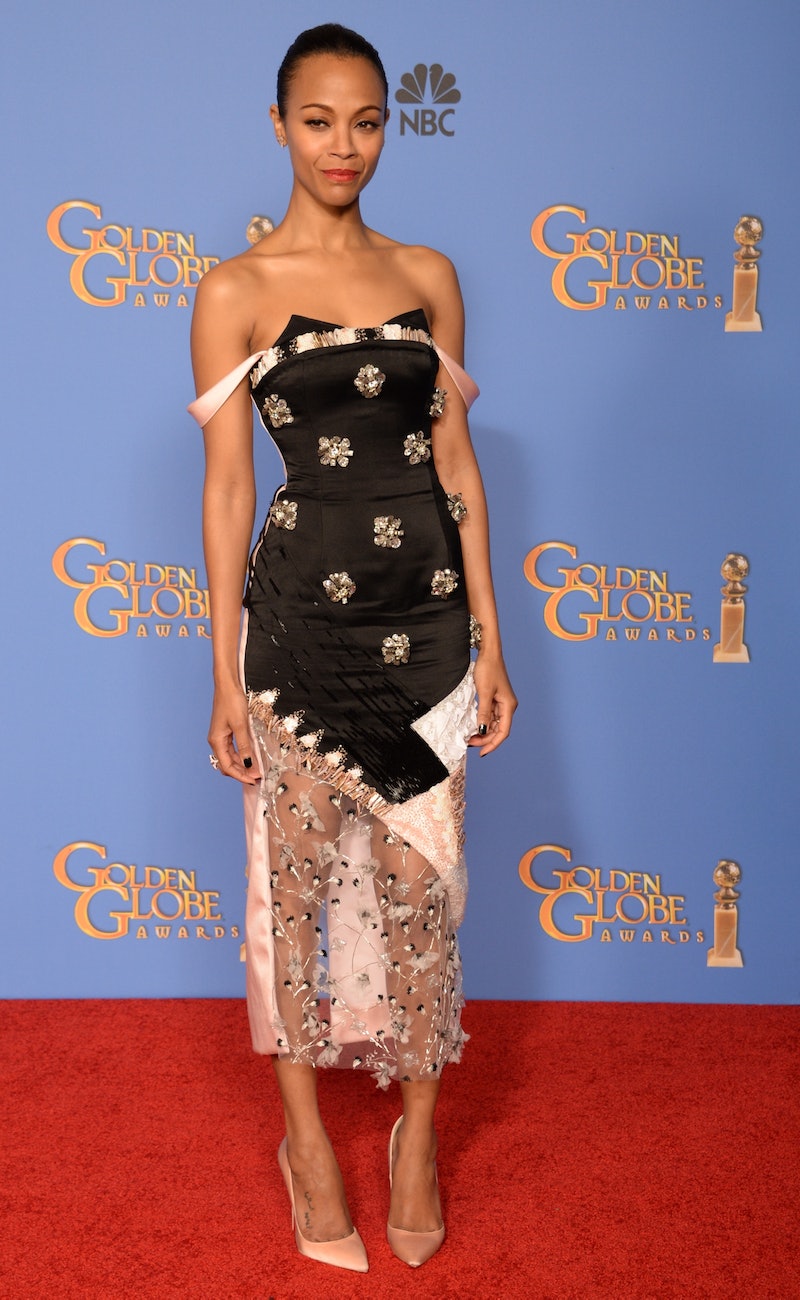 Her babies are not even a year old yet, and they are already getting a head start on some important skills. Namely, language skills. Zoe Saldana and husband Marco Perego are teaching their infant twins English, Italian, and Spanish. And it looks like the lessons will be put to good use once they get older. The actress revealed that her twins will be trilingual on an appearance on Jimmy Kimmel Live! on June 11, telling the host,

I don't know what they're going to speak because right now we're talking to them in English and Italian and Spanish. What's most confusing is my mom would like to be called a certain way as a grandmother. In Spanish it's mama. So I'm mommy. And then his mother is la nonna. I'm like, "How are they going to do this between la nonna, mama, and mommy?" I kind of have a feeling their first is going to be "English." Like, "Ugh, English! English! This is America!"

Regardless of which language her twins end up speaking on an everyday basis, it is really cool that they are getting the opportunity to learn and pick and choose between three different ones. After all, this will open so many doors of communication for them with people who may not speak English very well or not at all. Plus, it's been scientifically proven that multilingualism is good for your brain, and allows you to better focus on demanding mental tasks, even with distractions. It's worth applauding Saldana and Perego for stepping up to the challenge of teaching them, especially since only approximately 20 percent of Americans speak another language besides English. And it is also worth considering all the other amazing things they could teach them. Because they obviously have a lot of wisdom to share!

First of all, they could teach their kids a lot about the importance of redefining masculinity and gender roles. When Saldana revealed her husband took her last name after they got married, she was met with a firestorm of criticism online. The actress shut it down in the most epic way possible with a Facebook post: “Fathers, sons, brothers, men everywhere: Your legacy will not perish if you take your partner's surname, or she keeps hers. I’ve been made aware that a comment I made regarding my marriage has garnered some attention. I felt proud that my husband decided to take my last name as his own ... and I his.”

They could also teach their kids quite a bit about appreciating people who come from different backgrounds than they do. After all, since they are a mixed-race family, Saldana has said that race has been on her mind since her children's arrival. She reflected on her own parent's wisdom in an interview with InStyle, saying, "What was important for my mother is that we married somebody who still had dreams and aspirations — not what color or class they were from."

Aside from instructing their kids on ways to transcend stereotypes about heavier social topics like gender and race, they would also do well to teach their kids a thing or two about building their careers once they get older. After all, the boys having two successful parents would make for wonderful inspiration to pursue their own respective dreams.

It seems like they all but have their work cut out for them. It'll be exciting to hear more about the family's journey in the future.