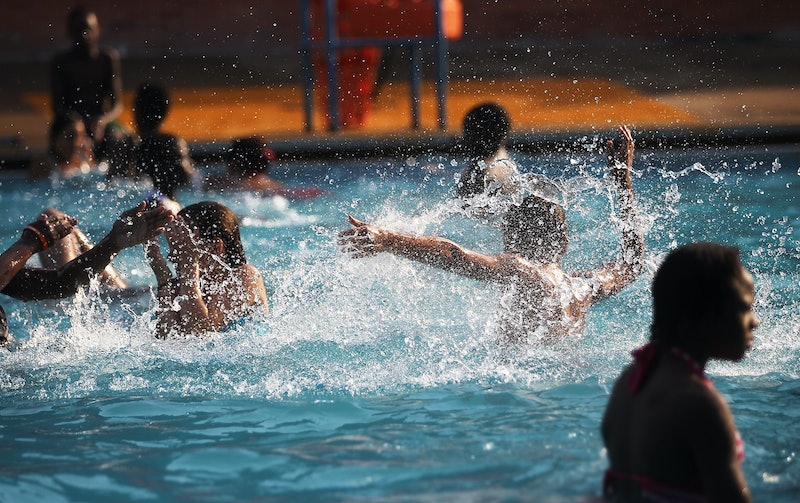 Just in time for summer: 7 gross facts about swimming pools that will make you never want to go near one ever again. Because, put simply, public pools are really gross. I grew up in a very hot climate, so I have many fond memories of swimming in the summers and pretending to be in The Little Mermaid. But I bet Ariel never had to worry about getting crazy stomach illnesses and hot tub rash (yes, that is a thing). I think my public swimming days may be over.

Given the harrowing statistics that you are about to read, you may be shocked to learn that the Center for Disease Control (CDC) does not actually recommend against swimming. What the CDC does recommend is that people exercise some common sense and proper hygiene when it comes to swimming in what is, essentially, a giant shared bathtub. The CDC advises:

That’s not so hard, right? (That’s assuming that you’ll ever want to go into a public pool again, which given how disgusting pools are, you may never want to do.)

1. The stuff that makes your eyes sting? It’s bodily fluids.

Chlorine binds with all the things it’s trying to kill from your bodies, and it forms these chemical irritants. That’s what’s stinging your eyes. It’s the chlorine binding to the urine and the sweat.

2. The number of people getting sick from swimming in public pools is on the rise.

Beach also told Women’s Health that disease can spread via public pools when people afflicted with diarrhea swim, saying, “We have a new parasitic germ that has emerged that’s immune to chlorine. … We’ve got to keep it out of the pool in the first place. We need additional barriers.” He explains that a swimmer doesn’t need to actually go to the bathroom in the pool to make others sick, as germs on the body can infect others. This is why it’s important to shower before going into a pool.

3. The chemical smell of a pool does not mean it’s clean.

According to Live Science­, a strong chemical odor coming from a pool does not mean that it’s so chock full of disinfecting chemicals that it’s clean. In fact, that smell comes from the chlorine binding with sweat, urine, and other fluids. A well-maintained pool will have little odor.

4. Twenty percent of Americans pee in pools. (At least.)

A 2009 survey from the Water Quality and Health Council found that one in five of those surveyed admitted to urinating in pools.

5. Dirty pools are more common than you think.

A report released by the CDC in 2010 found that in inspections of over 111 thousand public pools, just over 12% (that’s about 1 in 8) had to be immediately closed due to serious code violations that posed dangers to public health.

Hot tub rash is a skin infection caused by hanging out in a badly maintained hot tub. The CDC explains that because hot tubs are warm, chlorine and other chemicals used to kill germs break down faster than in regular pools, opening the door for nasties like Pseudomonas aeruginosa, the bacterium that causes hot tub rash. According to the CDC, common symptoms include:

· Itchy spots on the skin that become a bumpy red rash.

· The rash is worse in areas that were previously covered by a swimsuit.

A 2013 study from the CDC found E. coli, a bacterium that is “a marker for fecal contamination,” in 58% of pools studied. So yeah. I'm officially done.

More like this
11 Podcasts About The History Of Juneteenth
By Emma Carey
6 Abortion Advocates To Follow On TikTok
By Sara Youngblood Gregory
The Best Underwear For Sensitive Skin, According To A Dermatologist
By Alexa Vazquez
I’m Obsessed With obé Fitness’ At-Home Workout Classes — & It’s WAY Cheaper Than A Gym Membership
By Amy Biggart
Get Even More From Bustle — Sign Up For The Newsletter