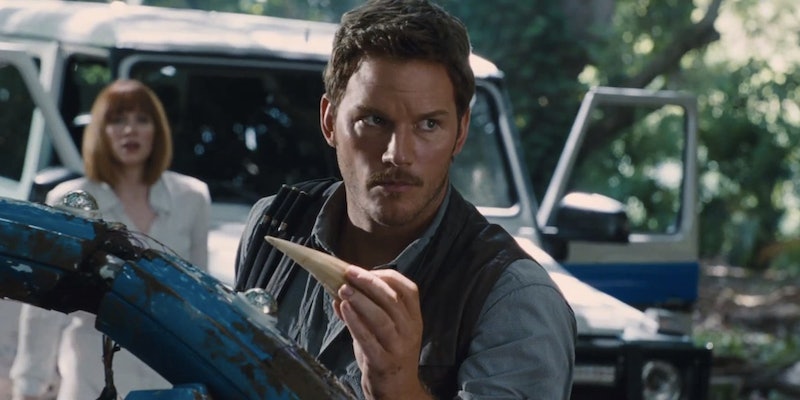 It's no surprise that the budget for Jurassic World was big — we're talking $180 million big. It takes a lot to not only bring new breeds of mega-dinosaurs to life, but to also have Stephen Speilberg producing and Chris Pratt starring. With the projections for its opening weekend budget to be perhaps the biggest of the summer, there's little doubt that the film will earn its money back and then some. Naturally, for a blockbuster hit like this one, Jurassic World is full of product placement. Ranging from elite names like Mercedes to mall favorites like Jamba Juice, Jurassic World's brand usage covers almost all markets.

Jurassic World is certainly not the first big budget blockbuster to use product placement and cross-promotion. The Avengers: Age of Ultron, for example, strategically placed labels like Audi, Beats by Dre, Levis, Air Korea, and John Deere to up their marketing game. Though perhaps the finest use of product placement in film history would be Dana Carvey's and Mike Meyer's take down of selling out to "The Man" in Wayne's World while decked out in Reebok and chowing down on Dorito's.

The moral of the story is, product placement has a long history in the world of cinema. Jurassic World just happens to be the latest (and biggest) to really go all out with it both onscreen and online. Take a look at all of the name brands you may have missed while staring into Chris Pratt's eyes... or covering your face from the terrifying dinosaurs.

Your friendly sponsor of the Indominus Rex exhibit.

There would be no science and research center in the park without them. Nor would Bryce Dallas Howard have a phone.

The official hotel of Isla Nublar.

I spy with my little eye on the Main Street of Isla Nublar...

Not only is it the favorite drink of Bryce Dallas Howard, as Jurassic World's operations manager Claire, it's also one of the many food and beverage locations throughout the park.

Jake Johnson, naturally the snarkiest of dinosaur experts, drums up names for new sponsorships for the park including Pepsisaurus and the Tostitodome.

Chris Pratt treats us to a very sexual, sumptuous scene in which he drinks a bottle of Coke like a Roman god.

Claire's ride of choice — and, when she whips it around the park, you feel like you're watching the world's most exotic car commercial.

Yes, even Parrot Heads can get their fix of piña coladas in Jurassic World.

What better way for Jurassic World visitors to remember their trip than a diamond pendant?

Because it's not a theme park without one!

You'll need to cool down after fleeing from all of those Jurassic predators.