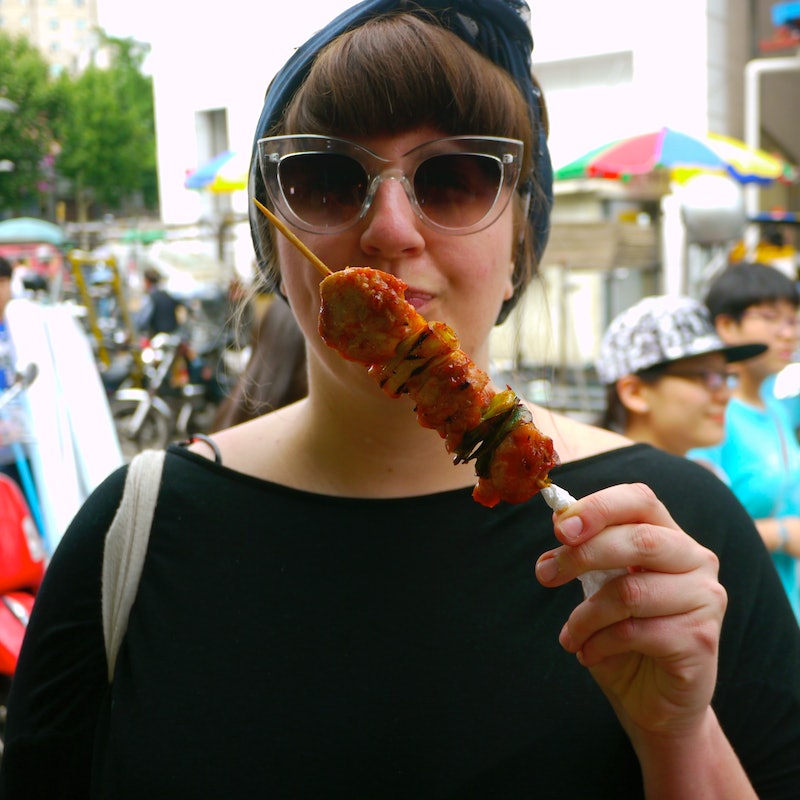 A once-thriving hub of trollery is now nothing more than the charred remnants of over 150,000 subscribers, page upon page of ugliness and cruelty crumbled into Internet dust. In the last week, fat women across social media have been cheering after learning that the fiery hellpit of Reddit’s Fat People Hate forum has been shut down.

If you missed the whole uproar, let me get you up to speed: r/fatpeoplehate was a way for overgrown sociopathic toddlers to while away an afternoon, posting pictures of fat people and endlessly repeating the same dull jokes about them. A long campaign got Reddit administrators to finally acknowledge that the forum was nefarious and actively harmful, and they've replaced it with a cartoon drawing of a door blocked off by caution tape, accompanied by a simple message:

“This subreddit has been banned for violating reddit rules.”

For us hams (as the users in the forums liked to call fat people), the subreddit fancied itself a valuable tool for self-directed education on just how shitty, unattractive, and poorly dressed we actually are. Without the presence of teachers like Shitlord007 and DieFattyFatFat21, it surely would've been harder to continue on our journey to Fat Human Garbage Kingdom, where we could assume our rightful place on thrones made of butter. But seriously, though: If you ever had a nice feeling of self-worth going, a warm understanding that you were awesome, or an acceptance of the idea that everyone is just trying to do their thing in this world, a brief drop-in at r/fatpeoplehate would take care of it pretty quickly.

Still, there are a lot of things to learn from the rise and fall of r/fatpeoplehate. Most of these points are deeply frustrating, but they're also valuable concepts that we can use moving forward.

1. Fat hate is an acceptable way to dress up radical misogyny.

A few fat men were unlucky enough to come to the attention of the forum, but nearly all of the targets were women. They said it was about fat, but it sure sounded like classic woman-hating language; we were “disgusting bitches” and “lazy c*nts” swaddled in “tarps.”

Delete the word "fat" and you'd see a forum full of posts railing at a woman in a photograph and demanding that she look different. Just by adding "hardy har, you're fat" to a pretty standard list of misogynistic attacks, everyone could pretend that r/fatpeoplehate wasn't about simply hating women.

2. Hate is a lot easier than the alternative.

Amber, a 29-year-old body positive social media activist, was frequently featured on the site. She feels good about herself and her body and inspires others to do the same, but that got disrupted quickly the first time r/fatpeoplehate got ahold of her picture. In conversation via email, Amber tells me:

“They had stolen photos of me, including one of the hardest photos I've ever taken of myself, a full-on belly shot that I had taken to go along with a post I made years ago about how my belly had been the hardest part of me to learn how to love. The folks from the site Photoshopped my bikini top over my lumpy stomach, which they likened to 'extra boobs.' I couldn't help myself but spend the next hour reading every single one of the 200 comments. People said things like, 'I wish it was legal to shoot fat people on sight,' guessed how much of my income I must spend on food, laughed about how I’m ‘so disgusting but at least I’ll be dead soon.’ I have an extremely high self-esteem. But by the end of it, I was nauseated and suicidal. I felt worthless.”

It likely took Amber years of work to come to an understanding of her body, and none of that work was easy. But then, somewhere out there, a hardworking subredditor undermined that work with a few clicks in Photoshop, gazing down at his careful craftsmanship, thinking with quiet satisfaction: “My work here is done.” Maybe his mom even gave him a medal. That's what makes cruelty such a low-hanging fruit: A swift swipe with hate's sharp knife cuts down progress in a second.

3. Most hatred of fat people is still sloppily disguised as concern.

The members of r/fatpeoplehate were really convinced that jumping up and down and screaming "BECOME THIN" at people would change lives. It was concern trolling, but also a demand, and a real frustrated desire for us to learn some kind of lesson. We never figured out what the lesson was, exactly, but it must have been in there somewhere, and r/fatpeoplehate was tireless in trying to communicate their Very Important And Crucial Understanding. Furthermore, it wasn't enough for them to express their concern with one another: They wanted to impart it to fat people directly as well.

"Defenders of r/fatpeoplehate like to say that if we fat folks don't like it, not to look at it," says Amber. "But these same people were the ones who went onto Instagram and Tumblr, stole people's pictures and post them, and then went back to leave comments and asks saying, 'I saw this picture on r/fatpeoplehate!' They wanted us to go to the forum. They wanted us to read what they thought of us. They wanted to hurt us."

4. Plenty of women don't see value in learning to love themselves.

Say what you will about r/fatpeoplehate, but it was inclusive: It wasn’t just men hating women, but women hating women. Looking back, the posts written by women most often had to do with a fat woman’s fashion and beauty choices. The women on the forum cheered on male counterparts who would just as soon call them “miserable c*nts” as they would chastise them for gaining weight.

We like to believe in solidarity. We like to think that women have an understanding of their experiences that lets them reach out, help, and protect each other. In body positive communities, it's easy to forget that there are plenty of women who don't see value in self love. One look at r/fatpeoplehate reminded me that there are plenty of women who mock other women for rejecting the very same beauty standards that they themselves are oppressed by.

5. Organizing around an enemy is easy. Coming together to figure things out is hard.

What's wrong with the Internet? Why is it so easy to build something ugly and take aim at an undeserving target?

r/fatpeoplehate was huge: 150,000 active members, in full public view, on the most popular discussion site in the world, repeating culturally acceptable messages about which people should feel worthless — and yet it still cultivated a shared identity as a beleaguered group of truth-tellers fighting against the tide. Now that they've been banned, they're even more convinced that they're free-speech martyrs who had something important to say.

So why can't body positive communities — that actually have something positive to share — come together as strongly, with as much visibility? Because learning is much harder work. We're all trying to find the words for our experiences, to find a way to value ourselves, because the conventional language and understanding of how women look and feel beautiful actually apply.

It's incredibly difficult, and it means that we get into conflict, and that body positive debate can turn ugly when mild criticism is understood as a personal attack when someone is "doing it wrong." But that difficulty is a good sign. It's a sign that you're not just joining in a pile-on, that you're not just going along with what everyone else teaches you. It's a sign that the stakes are high, that the progress is real, and that we're building a new culture together.

The sting of r/fatpeoplehate still lingers for a lot of people, but someday, perhaps we too will look with pride at the world we made the same way that those subredditors gaze upon their hate-fueled piles of diseased shit. We'll realize that we accomplished all our goals: That we learned to love ourselves, shared all the beauty tips, and celebrated all the self-respect. We'll finally be able to rest and enjoy ourselves as we are. And in that bright, still moment, we'll be able to look back at r/fatpeoplehate and simply think, "Christ, what a bunch of assholes."

More like this
I Tried Kendall Jenner's No-Pants Look As A Plus-Size Woman
By Sarah Chiwaya
Instagram & Facebook May Finally Lift Their Notorious Nudity Ban
By Allie Fasanella
42 Black Owned Fashion & Beauty Brands To Support Today & Always
By Mekita Rivas, Shea Simmons, Kui Mwai and Dominique Norman
How To Curl Your Hair With Leggings, According To TikTok
By Carolyn Steber
Get Even More From Bustle — Sign Up For The Newsletter
From hair trends to relationship advice, our daily newsletter has everything you need to sound like a person who’s on TikTok, even if you aren’t.