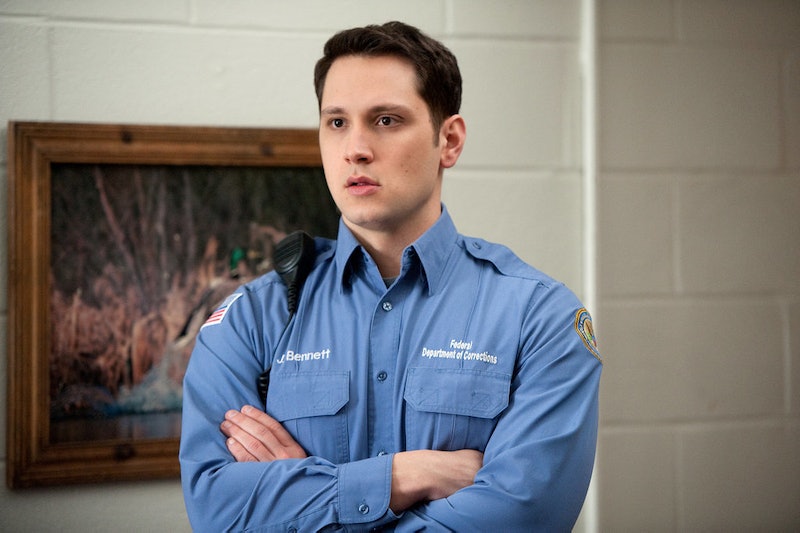 I'm not sure if he's aware, but [spoiler alert!] Orange Is the New Black's (former) good guy, John Bennett, definitely doesn't know the real meaning behind a marriage proposal. Because, uh, as far as I know, you are definitely not supposed to ask someone to spend the rest of their life with you and then subsequently peace out of town, without even letting them know. So, I'll ask the question we're all wondering... is John Bennett ever coming back to Litchfield, and better yet, is Matt McGorry ever coming back to OITNB?

If you've somehow made it through the entire third season already, you know that McGorry's last appearance was in the second episode. We last see him as he ditches Daya's old crib that Cesar weirdly gifted him, and drives off into the great, wide yonder, while looking pretty damn upset about it. Sure, we also know that Caputo told Daya that John wasn't coming back, but let's be honest here... it seems a little out of character for him, no? Before his scare with Cesar, he tried to be as involved with Daya and her pregnancy as much as he possibly could, even to the detriment of his own career and freedom.

Maybe I'm too invested in these characters, or maybe I'm an optimist, but while leaving Daya was a total douche move, I don't think John is going to stay gone for good. Why do I think that? Well, other than my faith in the seemingly altruistic fictional character, the actor who portrays him seems insistent that OITNB is going to still be a part of his life. Last July, when it was found out about McGorry's new role in How To Get Away With Murder, people were nervous that it meant the end of his time at Litchfield. But, he told E! Online then that he would still be on the show. They weren't totally pacified by that answer. The publication then pried further and asked if he'd still do OITNB if HTGAWM got a second season. He said, "It's hard to really know. I think it's just going to depend on what happens and when shooting schedules are..."

Well, HTGAWM did get a second season. So, where does that leave him? In a June 2015 interview with Variety, they asked the actor where he saw his career going. He told them, in reference to OITNB and HTGAWM, that, "I’m hoping that these shows continue to go for me..."

So, there you have it, kids. It's possible he'll be back, and if I was a betting woman, I'd say we'll see his baby face once more. Perhaps not as often as before, but I just can't see them ending John and Daya's story this way. So, considering that he may return, here are five possible things C.O. Bennett could be doing in the meantime:

1. Driving Over The Border To Canada To Start A New Life Where Cesar Can't Find Him

...While also establishing new identities for Daya and Baby Bennett, until the birth and her release.

2. Getting Stuck On A Crazy Long Line At Pottery Barn Kids

I know that the stuff there is cute, but is it really worth the aggravation?

3. A Pre-Fatherhood Road Trip For One Last Hurrah

In this crazy market? He could just be held up, trying to negotiate prices in the middle of a bidding war. Hey, this stuff takes time!

5. He Drove Off The Road, Hit A Tree, Lost His Memory, Was Nursed Back To Health By Shonda Rhimes, And Is Now Starring In Her New Hit Show

More like this
Jurnee Smollett’s Heart Is Healing
By Rebecca Carroll
Natalia Dyer Opened Up About Steve & Nancy’s “Lovely” ‘Stranger Things’ 4 Dynamic
By Grace Wehniainen
What Working At Marvel Is Really Like, According To A 'Ms. Marvel' Co-Creator
By Gretchen Smail
'Stranger Things' Star David Harbour Has This Actor In Mind For A Hopper Spinoff
By Alyssa Lapid
Get Even More From Bustle — Sign Up For The Newsletter