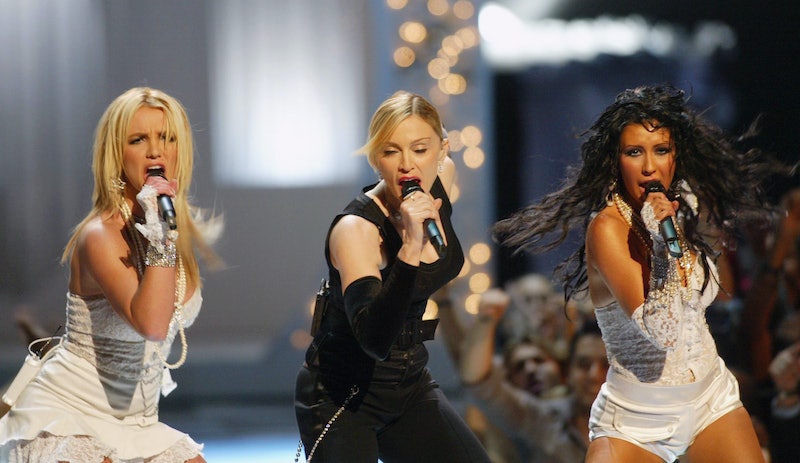 Do you ever think about what it would be like if Britney Spears and Christina Aguilera, the two most amazing pop princesses ever, combined forces and collaborated on a project together once again (you know, after that unforgettable VMAs performance with Madonna way back when)? Because I do. All the time. Sometimes I spend hours imagining how they could bring their unique strengths together to form one super pop power, like Janet and Michael Jackson did in “Scream,” or Madonna and Justin Timberlake did in “4 Minutes to Save the World.”

Now, I realize there’s that whole rumored history of Britney and Christina not really liking each other, and I can see why. They’re pretty different personality-wise and performance-wise, but don’t you wish they could see beyond their differences and come together for the common good? And by the "common good" I mean "us"? Because I do. All the time. And in that time that I spend wishing and wanting them to just do it already, I think about all of the amazing projects they could work on together.

Imagine the costumes! Imagine the makeup! IMAGINE ALL OF THE WILDLIFE PROPS. There are so many good reasons why they should collaborate — for the fans, for the fame, hell even for the money — but what would we want from a Britney-Christina collaboration? Here are just a few of the ideas that I’ve had in the past, oh, fifteen years that I’ve spent thinking about this.

Really, it's just be a showcase of stomach-baring outfits, belt-worthy classics, and crazy hairstyles. It would be the dream destination for bachelorette parties everywhere.

3. The Most Amazing Talent Competition Ever

Think Star Search meets American Idol meets Shark Tank, because you know those two as judges would be BRUTAL.

All midriffs, all the time.

You know these two would lay all of the '90s pop gossip out on the table. Like which boy bands were the creepiest with their fans, when they really lost their virginities, and who, on the set of the Mickey Mouse Club, Ryan Gosling made out with.

Crossroads meets Burlesque? A classic road trip movie, but with those pop stars and their iconic voices? YES, PLEASE.

A Dollywood for a new generation! Their hits would be constantly pumped from speakers shaped like rocks and the main attraction would be a roller coaster that has you “traveling through Hollywood” with Britney at the helm. Like, bald Britney, y’all. That’s bound to be a wild ride.

Based on their rise to fame when they were children, with two young up-and-comers playing them, and the two of them playing their girls’ mothers. I’m picturing neighboring Hollywood apartments, a laugh track, and a vicious competition between the two houses à la West Side Story.

More like this
You Might Want To Rewatch 'Elvis' For This Britney Spears Easter Egg
By Grace Wehniainen
All The Sneaky Lindsay Lohan Movie Easter Eggs In Her New Ad, Explained
By Stephanie Topacio Long
S Club 7’s Jon Lee Continues To Reach For The Stars
By Rachel Mantock
Alicia Silverstone Has Recreated An Iconic 'Clueless' Scene
By Frances Stewart
Get Even More From Bustle — Sign Up For The Newsletter