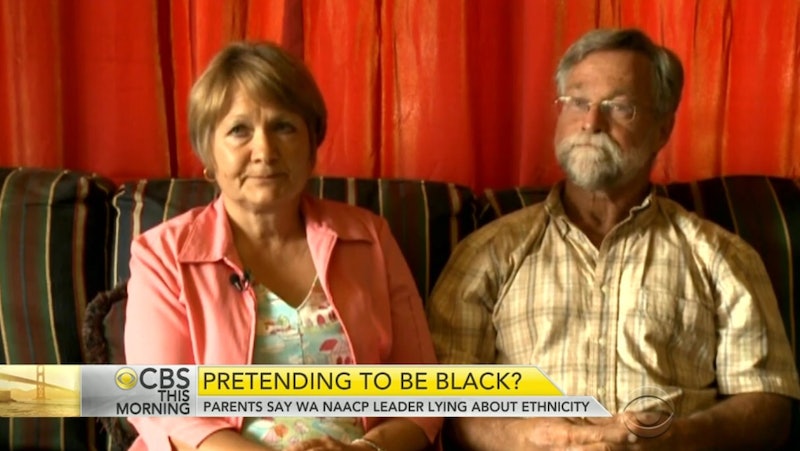 There's a good chance by now that you've heard of Rachel Dolezal, the Spokane, Washington NAACP leader who's embroiled in controversy over her racial identity. Namely, she's always said she's black, and her parents —Montana residents Ruthanne and Larry Dolezal — say she's Caucasian, a blonde-haired, blue-eyed woman, primarily of European descent. But the tension between her own statements and those of her family is clear: Rachel Dolezal and her parents are at odds, giving very different explanations for what exactly is going on here.

The NAACP, for its part, has issued a statement regarding Dolezal, clarifying that "racial identity is not a qualifying criteria or disqualifying standard for NAACP leadership," but that's hardly going to quell the criticism and discussion.

On the one hand, you have Dolezal herself, who's been at the center of this firestorm since her parents seemingly outed her on Thursday. In an interview with Spokane's local CBS affiliate KREM, Dolezal defended herself, insisting that she identifies as "black," and making particular point to also say that she didn't like the term "African-American." On the other, her mother Ruthanne told KREM that "she's chosen not to just be herself, but to represent herself as an African-American woman, or a biracial person."

The tension seems to run deeper than just what's sitting on the surface, however. Dolezal claims, according to CBS, that her family's statements are the result of ongoing dysfunction, and according to the Washington Post, there's no denying that the family doesn't get along — her parents and two of her brothers no longer speak to her, alleging that she made claims of familial abuse. Even stranger, they allege that Dolezal's been living in Spokane with her 21-year-old brother, who is black and was adopted by the family, while claiming he's actually her son.

Dolezal, for her part, gave a response to KREM that made the level of disdain between the two sides very clear:

Really, it's Larry and Ruthanne who are questioning. And, so, what I'd say to them is, I don't give two s**ts what you think.

Suffice to say, social media has been inflamed by this story, in terms of mockery, heady criticism of Dolezal, and some defenses alike. For the time being, however, it seems like she and her family will remain very much at-odds — according to the Washington Post, Dolezal's brother Zach (with whom she reportedly does not speak) described the situation as "a farce, really, is what it is."

More like this
23 Abortion Funds In States With Trigger Bans To Donate To
By Emma Carey
Sandra Bullock, Girlboss Extraordinaire
By Matt Harkins & Viviana Olen
Spice Girls’ Net Worth: The Richest Member Is Wealthier Than The Rest Combined
By Hugh McIntyre
Lydia Leonard Is Setting The Record Straight
By Olivia-Anne Cleary
Get Even More From Bustle — Sign Up For The Newsletter