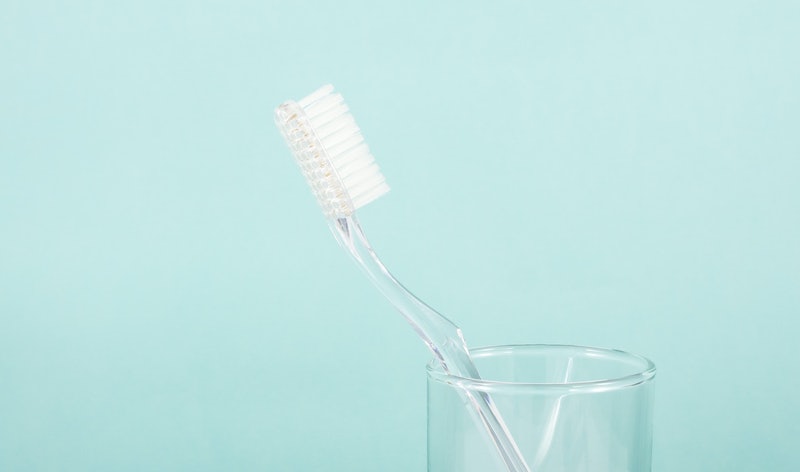 Last week, I threw away Jason’s* toothbrush. I should note that we broke up in January, and it’s June.

I should also note that it was hiding behind a few bottles of odds and ends in my vanity — dry shampoo, a face cream I barely ever use, a nail polish color I wouldn’t pay anyone I consider a friend to walk out in public wearing — but it wasn’t there by accident. This is my ritual. Once the relationship is over, I can’t bear to just toss the toothbrush in the trash. The finality of it is too epic for me. The period on the end of the relationshippy sentence. So I channel some sort of chipmunk mechanism, take the toothbrush, and hide it.

For the first few weeks, I know it’s there. And it’s not that it so much taunts me, because the presence of the toothbrush usually follows the presence of the men: they’re usually there, too. Jason was, for instance. We didn’t cut off communication completely: we kept going to dinner; we kept seeing each other on weekends; and there was that one afternoon where we were on his couch, and the next moment I picked up my head, I was on top of him, and neither of us had very many clothes on. The toothbrush doesn’t go away, just in case it’s needed at some point again, I guess — even if I don’t have any explicit hopes or desires of getting back together. It’s for practicality sake.

I’m very practical, clearly. Which is obviously why I’d been hoarding a used toothbrush belonging to a man who hasn’t stepped foot in my apartment since the night of our breakup.

There have been other men who’ve performed dental hygiene at my bathroom sink — with the stuff they’ve brought, and subsequently taken with them the next morning — but no one’s left anything behind, and no one’s known about Jason’s baby-blue brush hanging out in the medicine cabinet while they do it.

Quite honestly, I’d forgotten about it, too. With life having slipped into...how it eventually does once you break up with someone — they get back to their independent stuff, and you get back to yours, and you realize you do a fine job operating as a solo human being, how now! — the oddly ritualistic, hidden treasure in my medicine cabinet had faded away.

That is, until last week, when, inspired by a dire need for SPF, the face cream I never used needed to be replaced by something that would help me on my quest not to prematurely turn into my grandmother. And with one reach into my vanity, Jason’s toothbrush came tumbling down into the sink like an all-too-primetime-CBS metaphor.

This year in March, I’d asked Jason to spend my birthday with me. I was alone, not seeing anyone of significance, and feeling particularly sorry for myself: all the makings of a mid-twenty-something flipping the calendar another year. Check! The breakup was still feeling fresh — we’d been talking about moving in together not fewer than six months ago — and albeit tired, he looked good, engaged in work, directional, and most importantly, we couldn’t been have further from his mind. All of his walls were up. So I did what made the most sense for the occasion: I sat on a bench and cried. Happy birthday, indeed. (He did pay for dinner.)

Last week, standing in my bathroom, I grabbed the toothbrush from the sink and, without a second thought, marched it to the garbage bin. And took out the trash. You want a new metaphor? I need room for my SPF.

*His name is not actually Jason, for both my sanity and his. Although I’m not sure “sanity” is the theme of what we’re going for here.