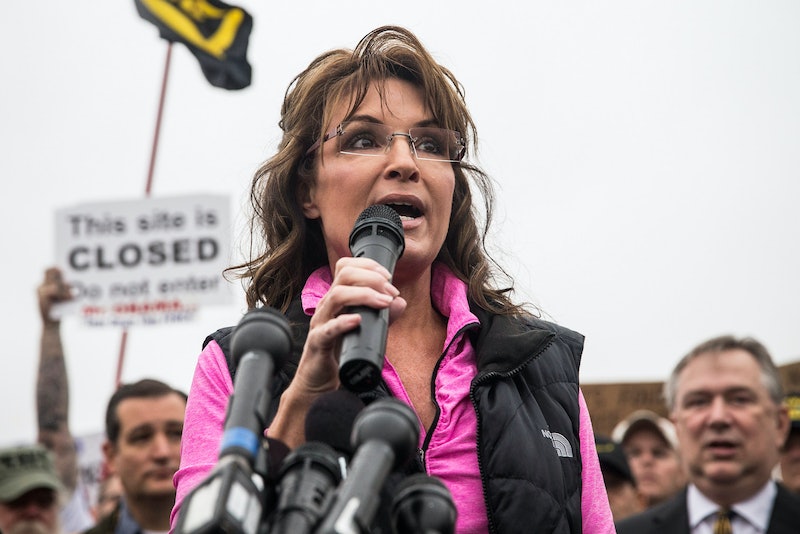 ICYMI, here are some must-read stories from this week in religion: Sarah Palin apologized for saying that Pope Francis made "liberal statements." The failed vice presidential candidate had been referring to the Pope's comments about not making hot-button issues like homosexuality and abortion focal points for the church. (She's on a real role this week — she also compared the United States' debt to slavery.) Indeed, Pope Francis has announced a survey of Catholics around the world in order to get their input on these controversial issues. Palin wasn't alone in responding to the shift in rhetoric: Conservative Catholics say Pope Francis's actions and statements have also made them feel left out of the church.

Shi’a Muslims around the world celebrated Ashura, a holiday that marks "the creation of the world, Noah’s departure from the ark, Moses’ flight from Egypt, and the martyrdom of the Prophet Muhammad’s grandson, Hussein ibn Ali, in 680 A.D.” That's a lot of things to celebrate.

Gay and gay-friendly congregations are on the rise in the United States, according to a new Duke University study.

Methodist ministers stood up to their church’s exclusionary policies in Philadelphia this week, when 50 ministers gathered to marry two men in a controversial same-sex ceremony.

Baha’i’s celebrated the birthday of the founder of their faith this week, as attention returned to their political repression in Iran.

And the Vatican said that it will display the bones of St. Peter for the first time ever. Peter was one of the 12 apostles and was believed to have been crucified upside down.

Here are some long form pieces from the last week that you should not miss.

Jack Jenkins took a look at religious groups rallying behind immigration reform for Religion & Politics. For them, faith is a key motivating factor in the fight for immigration justice, and their religious communities are a community to mobilize:

As the immigration debate’s focus has shifted to the influx of immigrants from Central and South America in recent decades, Catholics, Jews, and progressive Protestants have been quick to lend a helping hand. When thousands of Central Americans fled to the United States to escape oppressive government regimes in their home countries in the 1980s, for instance, hundreds of Catholic, Protestant, Jewish, and Unitarian Universalist congregations along the U.S.-Mexico border opened up their houses of worship to the refugees, offering them legal aid, financial help, and housing. Many believe the effort, known as the Sanctuary Movement, played a role in pressuring the Reagan administration to pass the Immigration Reform and Control Act of 1986—a law that provided legal status for more than 3 million undocumented immigrants.

The Daily Beast had a review of Zen Predator of the Upper East Side, a book that discusses a scandalous sex ring in one of the largest and most prestigious western Buddhist communities. Jay Michaelson wrote about how the book upended some commonly-held notions about sexual abuse, in part because all of the participants were adults, and — ostensibly — not forced into a sexual relationship with their guru.

But a Zen monk? Here, too, the situation is more complex than it may first appear. We may have an image of Zen abbots as peaceful, enlightened, and sexually abstinent, but this simultaneously parochial and Orientalist image is our problem, not theirs. Actually, enlightened Zen monks are often worldly, engaged, and sexually voracious. Likewise, most Westerners may believe that sex and spiritual teaching should be kept separate. But in what non-Judeo-Christian-Muslim book is that written? Indeed, some of Shimano’s sexual partners regarded their physical intimacy with their teacher as part of their spiritual path. We should be wary before projecting our own Western sex negativity on non-Western spiritual teachers.

And in the New Yorker, Joan Acocella perused some literature on St. Francis, the namesake of the current pope. How has the saint’s image persisted so powerfully through the centuries after his death?

Francis came from the nouveau riche. His father, Pietro, was a successful cloth merchant in a time when the mercantile class was on the rise and clothes very much made the man. Francis went to school for only a few years, as was typical for a boy of his circumstances and sufficient for acquiring the skills a cloth merchant needed. As a teen-ager, he belonged to a gang of rowdies from prosperous Assisi families who, of a night, would eat a fine dinner, get drunk, and, in the words of Francis’s first biographer, commit “every kind of debauchery.” Francis, a high-spirited boy, was their leader and paid the bills, which made him popular. Pietro often went on business trips to France, and Francis, in time, probably went with him. On those journeys, he would have learned both French and the troubadour style of poetry, which, scholars say, infused even his most earthy writings, notably the “Canticle of Brother Sun,” said to be the first poem in the Italian language, in which he addresses the sun, the water, and the wind with humble adoration.