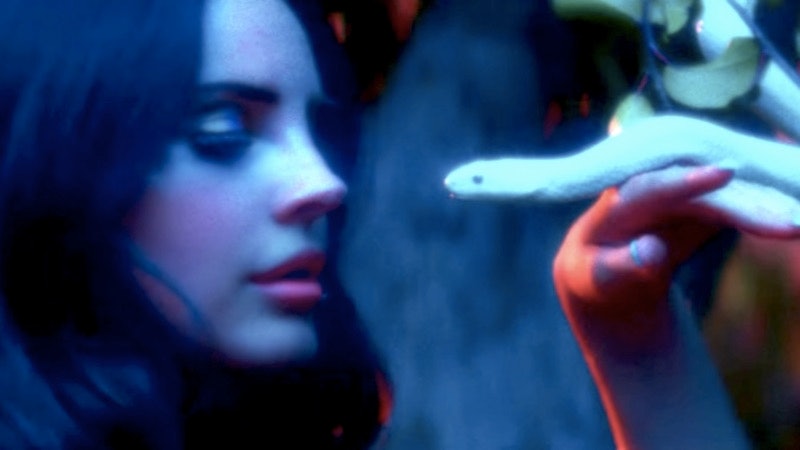 Lana Del Rey is an artist who has centered her work around what appears to be a burning desire for an age in which she did not live. By now, most fans are fairly familiar with this style of hers — in fact, it's why many love her. From her earliest videos as Lizzy Grant to her Paradise album, Del Rey has consistently utilized iconic imagery from ages past (i.e. Clark Gable screen tests from the '30s, footage of the day John F. Kennedy was assassinated in 1963) in what now feels like an endless loop of referential homage. The height of her nostalgic tendencies, however, came in 2013's Tropico — Lana Del Rey's short film collaboration with director Anthony Mandler.

Tropico featured Del Rey and model Shaun Ross as Eve and Adam, respectively. In the video, the two of them were living in a Garden of Eden populated by Marilyn Monroe, John Wayne, Jesus, Elvis, and unicorns. It's 30 minutes of surreal imagery that's as confusing as it is resplendent. Shortly after Tropico was released, Mandler explained the meaning of the film in several interviews:

"We’re essentially retelling the creation of the universe, but by starting with the pop icons of the '50s and '60s, that will recalibrate any sense of the norm. What we were trying to get to was that Adam and Eve are abolished from the Garden and kind of catapulted into this hell on earth, where nobody really does anything."

Though the tones and themes featured in Tropico are pretty synonymous with what Del Rey's style is considered to generally be, the "Born To Die" singer more recently stepped away from such heavy use of nostalgia and American iconography in the past year. Thanks to her collaboration with The Black Keys' Dan Auerbach, her last album, Ultraviolence, aimed less for noir-chic and more for somber rock goddess. It was a critical success, but it doesn't seem like Del Rey is going to be sticking with the new style: In an interview with Billboard, Del Rey stated that her next album, Honeymoon, will be a return to her Paradise days (aka, the album that coincided with the release of Tropico).

Given that Del Rey is looking to return to this era of her career, I thought it would be a good time to look back on one of her biggest projects from that era. What worked about Tropico, what didn't, and what should she keep in mind if she's bringing that style back?

What Didn't Work About Tropico

It Was Pretentious At Times

In addition to describing the basics of the plot, Mandler repeatedly describes his own style as "Fellini-esque." (Which, I have to say, is the sort of thing you should let other people say about your work, not the other way around.) Now, yes — Fellini's amazing. But, he's also the king of cinematic pretension. Del Rey is already prone to emotional over-indulgence — teaming up with someone who has the exact same tendencies can feel like a little much.

Tropico makes some really interesting statements about fame, narcissism, and lost innocence. Unfortunately, it also goes on...and on...and on. In fact, I've never been able to watch the whole thing in one sitting; I usually watch it in sections and take day-long breaks in between (and I'm, like, a huge LDR fan) — so I'm pretty sure the video could have made the exact same statements if it were just a tad shorter.

Lana Del Rey, I want you to hear this from someone who loves you and truly wishes the best for you: You are not a Latin American gangster in LA, you never were, and you never will be.

What Worked About Tropico

Mandler's directing style is exorbitant, but Del Rey (who wrote the whole thing) knows exactly what she's trying to convey in literally every shot she's in. Even when it feels like the movie is going on too long, it's hard to take your eyes off Del Rey.

Ditto everything said above for Shaun Ross, the unbelievably intriguing beauty that plays her celestial counterpart — the model performs his role extremely well and, like Del Rey, it's hard to tear your eyes away from him.

Some Of The Imagery...

Does the video have a lot of unnecessary scenes? Yes. However, the Marilyn Monroe/Elvis/unicorn stuff is really effective — and casting Del Rey as some sort of Eve-meets-Mother-Mary character adds some bone-chilling layers to her persona.

The best part about Tropico is easily the music. Del Rey's Paradise tracks "Body Electric," "Gods and Monsters," and "Bel Air" her best songs — not to mention the most successful realizations of her desire to blend cinematic suspense and eerie tonality with her sound. If she wants to bring those sensibilities back to her music, then I'm all for it.

Ooooone suggestion: Maybe just write a shorter film the next time around?