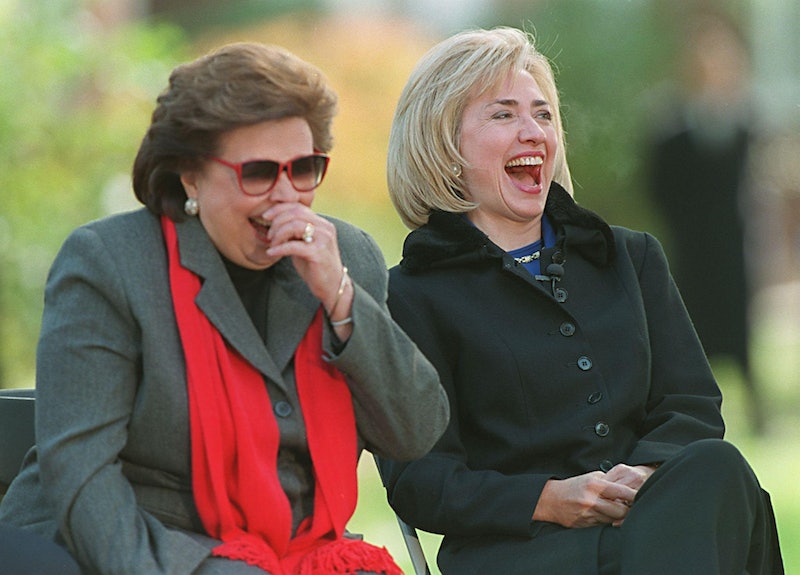 Hillary Clinton's 2016 presidential campaign may be a well-oiled political machine, but that doesn't mean she's forgotten why it all came to be in the first place. During a speech this weekend, Clinton discussed at length for the first time the story of mother Dorothy Howell Rodham, whose own tragic history provided the motivation behind most of Clinton's advocacy work with the Children's Defense Fund, a youth advocacy and research group based in Washington, D.C. According to Clinton's camp, it's the first time the former first lady has spoken about her mother's backstory on a national stage.

"[Clinton's] story is wanting to be an advocate for other people, [but] where does it all come from?" said Clinton communications director Jennifer Palmieri, in a statement on Thursday. "We think that’s an important thing for people to understand."

Clinton first wrote about her mother in her 2003 book, Living History, where she described her mother's supportive surrogate family as being her only support network.

"I thought often of my own mother's neglect and mistreatment at the hands of her parents and grandparents, and how other caring adults filled the emotional void to help her," wrote Clinton. "Her sad and lonely childhood was imprinted on my heart."

Born in Chicago in 1919, Dorothy Howell was the daughter of Edwin Howell Jr., a Chicago firefighter, and wife Della. The couple lived on what The Los Angeles Times dubbed a "tough stretch" of Michigan Avenue for the next seven years.

In 1926, after a rocky marriage, which often culminated in shouting matches and violent outbursts, the couple divorced, with husband Edwin accusing Della of abusing him, hitting him in the face, and leaving scratches across his skin on several occasions. He also alleged that she had abandoned their two daughters, Dorothy and sister Isabelle. According to Cook County court records, Della's own sister confirmed the abuse. Della refused to show up to court to deny his allegations.

After winning custody of his two daughters, Edwin Howell promptly abandoned them, citing an inability to handle the responsibility of parenthood. Both Dorothy and Isabelle were then sent to live with their grandparents, Edwin Sr. and Emma Howell, in Alhambra, California.

Growing up under her grandmother's supervision (her grandfather worked all day in an auto plant), Clinton wrote in her memoir that Howell was strictly forbidden from having visitors or attending parties, and was once confined to her bedroom for an entire year, except to attend school classes, as punishment. According to Clinton, the girls were berated and disciplined constantly.

After leaving home and working as a domestic helper for several years in 1934, Howell's mother, who had remarried, called her back to Chicago, claiming that her new husband would pay for Howell to attend Northwestern University where a then-teenage Howell had dreamed of studying. But upon her arrival, it became clear that there was no lucrative family sponsorship waiting for her — only a job as a housekeeper.

"I'd hoped so hard that my mother would love me that I had to take the chance and find out," Howell told Clinton. "When she didn't, I had no where else to go."

After eventually securing work as a secretary in Chicago, Howell married businessman Hugh Ellsworth Rodham and the couple became parents to three children, Hillary and her brothers, Hugh and Tony.

In her June 2014 memoir, Hard Choices, Clinton wrote of a story told to her by her mother, in which she recounted the kind gesture of one of her school teachers who had noticed that Howell would often come to class without any money to purchase milk during lunch. The teacher, said Howell, began buying two cartons with her lunch every day, calling Howell to her office and saying, "Dorothy, I can’t drink this other carton of milk — would you like it?" Clinton recalled the instructor as one of the "surrogate" parents that had kept her mother guarded over the years — something she would later strive to do herself. Clinton referenced this story in Saturday's speech.

Clinton also wrote that her mother had given her several pep-talks over the years, first to help her stand up to her bullies and again when she was considering leaving college.

"You have to face things and show them you’re not afraid," wrote Clinton in Living History, retelling an incident where a group of children had teased her and hit her mother. Later, after Clinton expressed doubts over being able to finish her university education, she recalled her mother saying, "You can't quit — you've got to see through what you've started."

That advice, coupled with her desire to help youth who had suffered the same injustices as her own mother, later launched Clinton's work with both the Children's Defense Fund and the Clinton Foundation's Too Small To Fail and the No Ceilings initiative.

Clinton also recalled in her memoir how her mother had never been afraid to stand up to her grandfather's stubborn, conservative Republican beliefs when the occasion arose.

"Now, wait a minute," Clinton recounted her mother saying. "Sometimes things happen to people that they have no control over." That same brand of individualism trickled down to Howell's children, with Clinton later writing that she was forced to play political peacemaker at the dinner table.

"I think it was part of the balance I created in my own life, it became a balancing of all my different influences and values," said Clinton in a 2007 interview with The Washington Post. "A lot was worth admiring in the sense of rugged individualism."

Despite a failed 2008 presidential campaign a year later, Clinton maintained a hopeful outlook, thanks mostly, she hinted, to her mother's tutelage.

"I ran as a daughter who benefited from opportunities my mother never dreamed of," she told a supportive audience during her 2008 primary concession speech.

On Saturday, she reiterated those sentiments during her first major campaign speech of the 2016 cycle.

"My mother taught me that everybody needs a chance and a champion," she said. "She knew what it was like not to have either one."

More like this
30 Books To Read This AAPI Heritage Month
By K.W. Colyard
Photos Of Boris Johnson Drinking At A Downing Street Lockdown Party Have Surfaced
By Bustle UK
10 Times Diana & Meghan Spoke Similarly On The Royal Family
By Sophie McEvoy
How The City Healed Five Years On From The Manchester Arena Attack
By Ella Glover
Get Even More From Bustle — Sign Up For The Newsletter