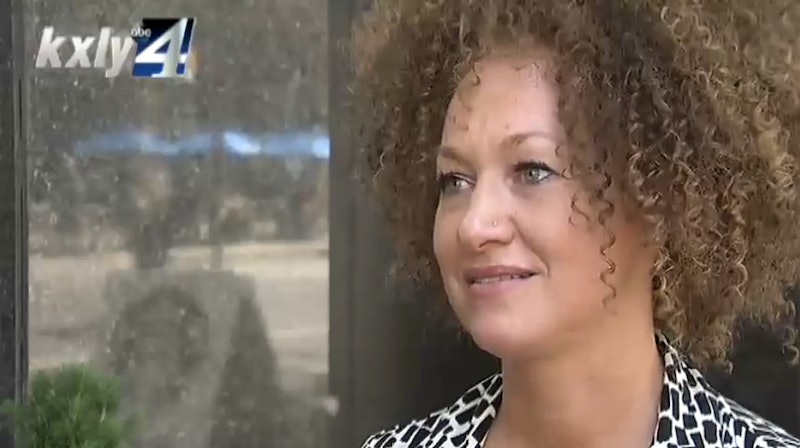 This year got its strangest news story yet when it was revealed that NAACP Spokane leader Rachel Dolezal was allegedly living as African-American woman for, well, still-unknown reasons. Dolezal's true racial heritage was made public this week after her white parents came forward with claims saying Dolezal is their biological daughter, they told KREM 2 News. There's a slew of lingering questions surrounding this story, but one of the most curious aspects is who Rachel Dolezal's ex-husband is and where exactly he fits in the story.

Dolezal's ex-husband, Kevin Moore, has yet to make any public statements. Not much is known of Moore, who is African-American, aside from a photograph from the couple's wedding in 2000, released to the media this week by Dolezal's parents, Ruthanne and Lawrence. In the wedding photo, Dolezal has very fair skin and blonde hair — a dramatic change from the tight brown coils and darker skin she has now. The couple reportedly met in Washington, D.C. in 1999, when Dolezal was attending Howard University.

One local profile of the college professor revealed some allegations Dolezal made about her ex-husband. In an article about Dolezal published in The Easterner last February, Dolezal described her marriage as unhealthy and claimed it was abusive, even alleging that Moore was violent against their son, Franklin. These allegations have not been confirmed, and though Moore has not responded publicly to these allegations and Bustle was unable to reach him, divorce documents obtained by the New York Daily News show that Moore accused Dolezal of lying to their son and poisoning Moore's relationship with him. “I hate to think you may be just sitting at home thinking of bad and erroneous things to say about me to Franklin,” Moore wrote in a 2005 letter to Dolezal, according to the Daily News.

Moore and Dolezal divorced in 2004. At that time, they were residing in Coeur d'Alene, Idaho. It's still unclear if Dolezal was claiming to be a biracial or black woman at the time of the divorce, or if her representation as such began afterward.

Dolezal's family members have shared new details that might provide more context for her alleged transformation from white woman fighting for the cause to a white woman masquerading as a biracial or black woman for the cause. Dolezal's adopted brother Ezra, who is African-American, claimed to BuzzFeed News on Friday that he was warned not to "blow" his sister's cover in 2012.

“She just told me, ‘Over here [in Spokane], I’m going to be considered black, and I have a black father. Don’t blow my cover,’” Ezra Dolezal claimed. However, he said he started noticing a change in his sister's appearance about six years ago, after her marriage had ended.

Ezra also contradicted other abuse claims previously put forward by Dolezal, including the allegations that she was abused by their parents. "She was treated really well as a child,” he told BuzzFeed News. “I think I would know if I was abused growing up, and I definitely wasn’t." Dolezal has not responded to Ezra's claims.

Still, none of Dolezal's family members know why the NAACP leader allegedly decided to lie about her racial heritage and disavow her biological family — nor do we know what her former husband thinks about the controversy.