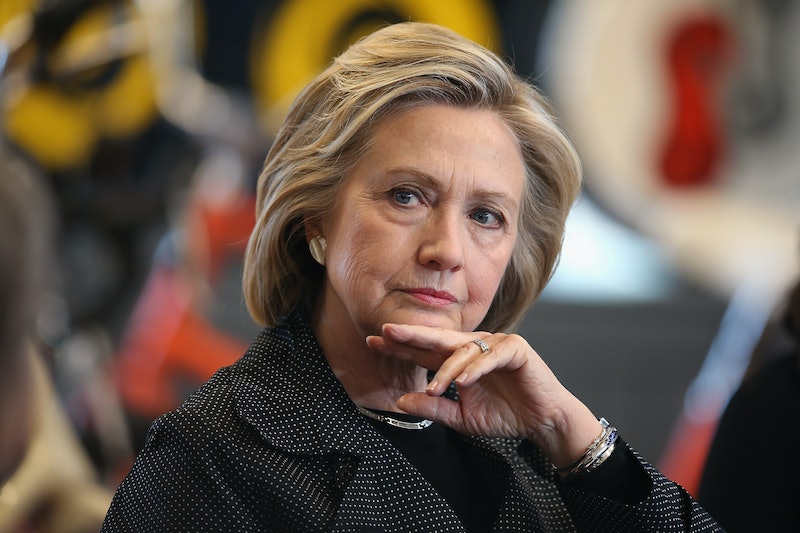 The center of Hillary Clinton's campaign kick-off was thought to be her late mother, Dorothy Howell Rodham, who truly exemplified the age-old American dream. But as she addressed her fans at Roosevelt Island on Saturday, it became clear Clinton was emulating another powerful figure: Franklin D. Roosevelt. So if you were wondering why Clinton chose that sliver of land between Manhattan and Queens, it seems like it wasn't just because of the stunning view.

Clinton held her 2016 campaign's first official rally at Franklin D. Roosevelt Four Freedoms Park, located on the southernmost tip of the island. So, already Clinton was standing on the shoulders of giants: The memorial park is named after FDR's historic "Four Freedoms" speech that reiterated America's support for democracy at home and abroad. FDR, too, was from New York, a state that Clinton adopted 15 years ago when she ran for the Senate and won.

"It's wonderful...to be here in this beautiful park dedicated to Franklin Roosevelt’s enduring vision of America, the nation we want to be," Clinton said. "And [to be here] in a place with absolutely no ceilings."

That wasn't the only time Clinton referenced the three-term Democratic president during Saturday's rally. In fact, the former secretary of state scaffolded most of her entire address — and campaign platform — around FDR's progressive reforms. At times, her speech even sounded like it was lifted from FDR's great Brother's Keeper address, which admonished the perceived selfishness of those few people and businesses in control of America's wealth.

Is it possible that Clinton chose Roosevelt Island to conjure the spirit of FDR? It sure seems like it. Clinton, who has been criticized by members of her own party in the past for her centrist and even right-leaning economic policies, may have a new vision of not only America, but also of herself.

The Man Who Continues To Inspire

Many people were wondering how much Clinton would rely on Obama this time around — after all, it wasn't so long ago that the Democratic Party was urging those up for reelection to avoid Obama like the plague. But on Saturday, Clinton acknowledged how FDR shaped the political platforms of both her former boss and her husband, Bill. How could she not follow in FDR's footsteps now?

You know, President Roosevelt’s Four Freedoms are a testament to our nation’s unmatched aspirations and a reminder of our unfinished work at home and abroad. His legacy lifted up a nation and inspired presidents who followed. One is the man I served as Secretary of State, Barack Obama, and another is my husband, Bill Clinton.

FDR Reforms For A New Century

Although Clinton chastised the Republican Party for singing "a song called 'Yesterday,'" she also drew upon 80-year-old policies for a new generation. In what is most likely her appeal to the growing movement of progressives more in-line with Bernie Sanders, Clinton promised to make income inequality a priority in 2016. She did so by quoting the New Deal reformer himself:

President Roosevelt called on every American to do his or her part, and every American answered. He said there’s no mystery about what it takes to build a strong and prosperous America: 'Equality of opportunity… Jobs for those who can work… Security for those who need it… The ending of special privilege for the few. The preservation of civil liberties for all… a wider and constantly rising standard of living.'

"It’s America’s basic bargain," Clinton added. "If you do your part you ought to be able to get ahead. And when everybody does their part, America gets ahead too."

What if I am already doing my part and I'm still burdened financially, you ask? Well, Clinton had an answer for that, complete with a word FDR loved: "prosperity."

Well, instead of a balanced budget with surpluses that could have eventually paid off our national debt, the Republicans twice cut taxes for the wealthiest, borrowed money from other countries to pay for two wars, and family incomes dropped. You know where we ended up. ... We're standing again. But, we all know we’re not yet running the way America should. You see corporations making record profits, with CEOs making record pay, but your paychecks have barely budged. While many of you are working multiple jobs to make ends meet, you see the top 25 hedge fund managers making more than all of America’s kindergarten teachers combined. And, often paying a lower tax rate. ... Prosperity can’t be just for CEOs and hedge fund managers. Democracy can’t be just for billionaires and corporations. Prosperity and democracy are part of your basic bargain too. You brought our country back. Now it’s time – your time to secure the gains and move ahead.

FDR's New Deal promised to "restore prosperity" in the midst of the Great Depression, and it was a theme that played on the forefront of his presidency until America entered the Second World War. When you compare the above passage from Clinton's recent speech with FDR's famous Brother's Keeper speech from 1938, it almost seems like it was written in the same decade — and the same politician:

Today, national progress and national prosperity are being held back chiefly because of selfishness on the part of a few… You know their reasoning. They say that in the competition of life for the good things of life “some people are successful because they have better brains or are more efficient; the wise, the swift and the strong are able to outstrip their fellowmen.” And they say that that is nature itself and you cannot do anything about it and it is just too bad if some, the minority of people, get left behind. ... But, my friends, this Nation will never permanently get on the road to recovery if we leave the methods and processes of recovery to those people who owned -- I say "owned" -- the Government of the United States from 1921 to 1933. They are the kind of people who, in 1936, the last national campaign, were saying, "Oh, yes, we want nobody to starve" but at the same time were insisting that the balancing of the budget was more important than making appropriations for relief.

See the connection yet?