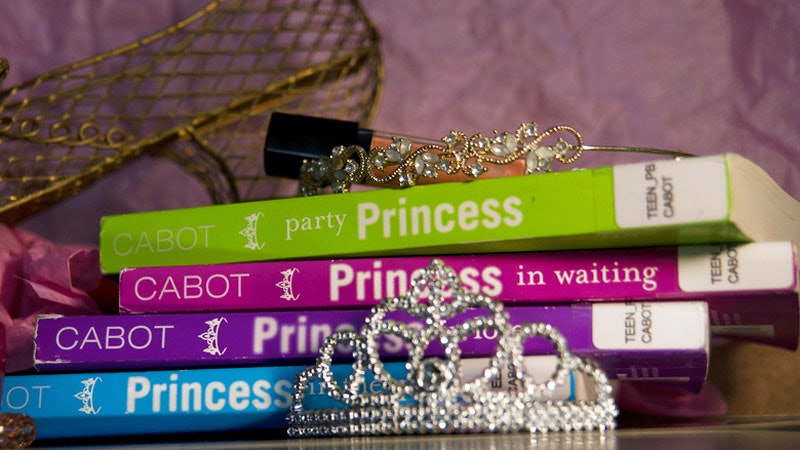 Every bookworm has a few authors who really define her earlier years. You know, those innocent pre-college days when we weren't poring over Dostoevsky and Derrida and could read without analyzing every single detail. (Don't get me wrong, I love my English degrees, but I miss reading a book and NOT automatically applying theory to it.) Those books may not have been as technically difficult or culturally important as some of the things I read later, but they definitely helped shape me during my formative teenage years. One of my absolute favorite authors, the one that I went to the library and hungrily searched for her next book, was Meg Cabot.

Even if that name doesn't sound familiar, I can promise that you're at least a little familiar with her work. Remember the movie The Princess Diaries, starring a young and adorable Anne Hathaway? Yeah, Meg Cabot was responsible for that. Her Princess Diaries series focused on the socially awkward Mia Thermopolis, who finds out that she's actually the future ruler of a small European country. Mia was funny, neurotic, and was simultaneously devoted to saving the world and convinced that she couldn't even save herself from high school bullies. In other words, she was you as a teenage girl, except she also got to wear a crown.

After taking a couple years off from writing about Mia, Cabot has released the newest Princess Diaries novel this month, The Princess Diaries , Volume XI: Royal Wedding. Mia is all grown up now, but I'm willing to bet she hasn't changed all that much. At least I hope not! I'm looking forward to revisiting my royal friend.

Mia wasn't Cabot's only relateable character, however. She has a knack of writing young women who are smart, witty, and socially rebellious, sort-of outsiders who you desperately wanted by your side against high school jerks. So, while you reread all of your Princess Diaries books (because I know you still have them, and that you're already planning to read them before getting your hands on the newest one), think about checking out some of Cabot's other books, because they all have some lessons to teach us. Below are some of my personal favorite life lessons that I learned from Cabot's books.

Just Because You're a Princess Doesn't Mean You're Not Super-Awkward

I learned many, many things from Mia Thermopolis, like what to do if your mom starts dating your teacher or how to deal with having no boobs whatsoever. The most important lesson, however, was that if you're truly awkward there's literally nothing that can change that. I mean, Mia inherited an entire country. She'll one day rule her own kingdom, and that still doesn't really stop her from being seen as a total weirdo and at times a social pariah. If a crown couldn't save her, nothing would. But instead of letting this get her down, she learned to accept herself, awkwardness and all, and found friendship, her own unique talent, and love. And, you know, a kingdom. I might not have a great shot at that last one (although I have a thing for gingers, Prince Harry), but if Mia can own up to her weirdness, I can definitely embrace mine. Because princesses can be weird too, and that's awesome!

When Living People Are the Worst, Just Try Dating Ghosts

Ugh, dating, amirite? Although I now have a fantastic boyfriend, for pretty much my entire life I was a part of the single/dating world, which as we all know can be totally miserable. Like, soul-crushing, mind-melting, "Why don't I just date Netflix and Nutella?" miserable. Sometimes it seems like there isn't a person on the planet that's right for you. Well ladies, you're looking in the wrong place. Just do what Suze from The Mediator series did: fall for a dead guy. Sure, Jesse may be a ghost, but he's a way better match for her than any of the living boys she knows. Sometimes you have to think outside the box to find true love.

It Takes Courage to Stop an Assassination Attempt, but It Takes Way More to Survive High School

There are many, many different types of bravery, and they all deserve our respect. Sometimes the littlest things require much more bravery than the seemingly more important ones. For example, Sam from All American Girl stops a guy from shooting the president of the United States. Pretty big deal, right? Except, as she finds out, being an international hero isn't half as tough as sticking out in high school is. As silly as it may seem, standing up to bullies and daring to go against the status quo is just as hard sometimes as big acts of bravery.

The Grass Only Seems Greener On the Other Side, Especially When Your Brain Is Put Into the Body of a Supermodel

Have you ever looked at someone and thought, "My life would be so much simpler if I were her/him"? It may seem like someone's life is perfect because they have good looks or a lot of money, but we never really know what kind of troubles they're keeping to themselves. In Airhead , Em wakes up from an accident only to find out that her brain's been transplanted into the body of a famous supermodel. Of course, she quickly finds out that her new life isn't nearly as glamorous as it seems. The moral of the story? Just because someone is gorgeous and rich and has tons of boyfriends doesn't mean that they're actually happy.

Sometimes if it Seems Like You Have Chronically Bad Luck, You Might Actually Just Secretly Be a Witch

Do you ever feel like no matter what you do, bad luck always seems to follow you? Some people just can't seem to catch a break. There are a couple of ways of handling this. You could spend your whole life moping around, waiting for the next bad thing to happen to you. You can stay optimistic and try to find something positive that comes out of the bad events that happen to you. Or you could unlock secret powers and realize that you're actually a witch. Admittedly that last one might be slightly unrealistic, but I guess you never know, right? It happened to the title character in Jinx!

Always Try to Be an Agent for Social Change, Especially If You Have the Help of an Internationally Famous Teen Star

"Be the change you want to see in the world" is a great sentiment and makes a nice motivational poster to hang in schools, but it sounds a lot easier than it actually is. It can be very very, very scary to put yourself on the line and promote social change, especially if it's an unpopular opinion. That doesn't mean you shouldn't do it, but it does mean that you may need a little help. In the real world, this will probably come from friends, family, and like-minded activist. In Meg Cabot's world, this comes from teen superstars who are going undercover in a high school, à la Teen Idol. If I had a famous heartthrob encouraging me to upset the social hierarchy in my high school, I would have been a rebel too.

More like this
Read The First Pages Of Emma Rosenblum’s Highly Anticipated Debut, 'Bad Summer People'
By Samantha Leach
What Joyce Carol Oates Knows About Fame
By Erin Somers
What Is A "Hot Girl Book" & Why Is Everyone Talking About Them?
By Samantha Leach
10 Must-Read New Books Out This Week
By K.W. Colyard
Get Even More From Bustle — Sign Up For The Newsletter