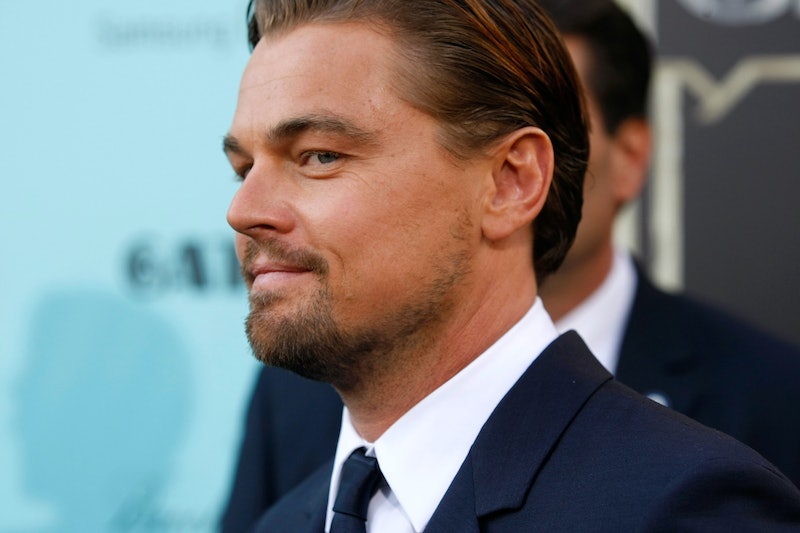 So, first things first: The girl from Warrant's "Cherry Pie" video, Bobbie Brown, wrote a tell-all book. She was fairly well known in the '80s and '90s, so this doesn't come as too much of a surprise, but what she's written in it really does: According to Bobbie Brown, she hooked up with Leonardo DiCaprio when he was only 19-years-old — and, apparently, he "put Tommy Lee to shame."

"I unbuttoned his jeans and tugged down on his boxers. When I saw made me gasp. It made no sense. The kid put Tommy Lee to shame," Brown writes in the book. Everyone knows about Tommy Lee's penis, of course, because of his sex tape with Pamela Anderson — so this means that Leo's pretty well-endowed. You know, if you've ever wondered about that, or anything. Didn't we all after Titanic, like, just a little?

That's not even the best part of this whole story, though: Brown, who was 26 at the time of their encounter, also writes that the two put on TLC's "Waterfalls" beforehand (that whole verse about the guy who contracts AIDs is a real mood-setter, y'know?). Also, apparently Leo was very responsible and concerned about STDs, because he reportedly asked Brown just before they hooked up: "So Bobbie, do you have any diseases? Also what about gonorrhea? Have you been tested for that?"

Hey. At least he was being responsible. Always use protection, everyone! Also, this book sounds awesome and I need a copy in my possession right now.

More like this
Long Live Bennifer!
By Allie Jones
Rihanna Is A Mom Now After Giving Birth To Her First Baby With A$AP Rocky
By Ananya Panchal and Jake Viswanath
Kaley Cuoco & Tom Pelphrey Just Made Their First Public Appearance As A Couple
By Hugh McIntyre
16 Celebrity Couples You Forgot Dated Including Helen Mirren & Liam Neeson
By Sam Ramsden and Lisa Fogarty
Get Even More From Bustle — Sign Up For The Newsletter