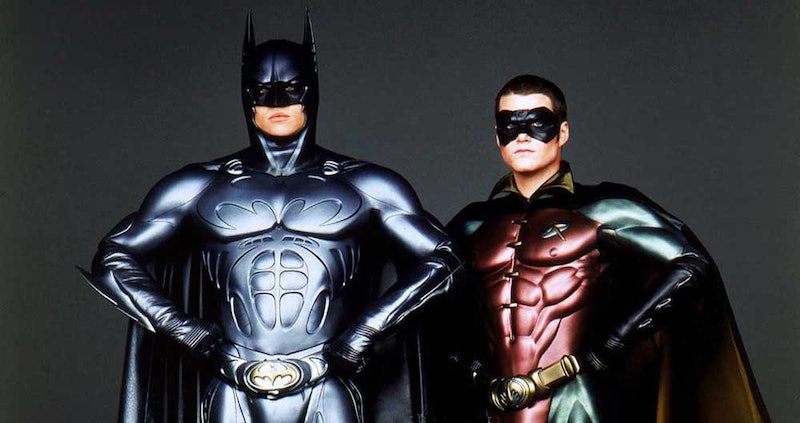 Two decades ago, Jim Carey went bonkers as The Riddler, Tommy Lee Jones was a slap-happy Two Face, and Val Kilmer suited up in a bulging rubber suit as Batman. Prior to Christian Bale and Christopher Nolan getting involved in the Batman franchise, the films were a little less brooding and a lot more classic comic book adventure... and most of them weren't terribly profound. That being said, I'd still go to bat for Batman Returns. It's simply a classic in the genre. In any case, Batman Forever will always be remembered as one of the sillier installments because it introduced the world to the Batnipple.

"What's the Batnipple?" you say. Well, dear reader, the Batnipple is a signature of the '90s Batman films and it is exactly what it sounds like — a nipple fashioned to Batman's (and even to Robin's!) Batsuit. "But why would Batman need nipples on his protective superhero suit?" you are probably pondering. My answer to that is: don't think so hard. Batman is a sexy millionaire playboy whether he's in action or whether he's in his cave crying about his parents. Let the Batnipple be what it is: gratuitous, ridiculous, and absolutely perfect.

But who wore it best? Val Kilmer of Batman Forever fame or George Clooney who really amped it up in Batman & Robin? Let's discuss. But first, press play:

Round One: Getting Ready For Action

That dark purple and blue air tells me things are about to get weird... in a sexy Batnippley way.

Wow, I'm getting a lot of areola here AND a lot of abdominals. Give it to me, baby.

The Winner: Clooney. The Batnipple is just too strong.

Round Two: Posing With A Sexy Lady Friend

Nicole Kidman is selling it, but Kilmer is a little dead in the eyes. PLUS SHE'S COVERING UP ONE OF THE BATNIPPLES.

No Batnipple for Cooney, but plenty for Chris O'Donnell and Alicia Silverstone.

The Winner: Val Kilmer by default.

Round Three: Spreading Your Batwings

I'm getting a whole lot more than Batnipple... if you know what I mean.

The Winner: George Clooney for sheer dedication to the Batnipple.

Always a bridesmaid and never a bride, eh Robin? NOT IN MY BOOK!

More like this
10 Eurovision Moments That Celebrate The Weird & Wonderful Camp Extravaganza
By Sam Ramsden
The 'Hocus Pocus' Sequel Finally Has A Release Date & It Makes Total Sense
By Shannon Barbour and Radhika Menon
9 Honestly Unbelievable Revelations From The WAGatha Christie Trial
By Frances Stewart
Everything To Know About Marvel’s 'Thor: Love And Thunder'
By Grace Wehniainen
Get Even More From Bustle — Sign Up For The Newsletter