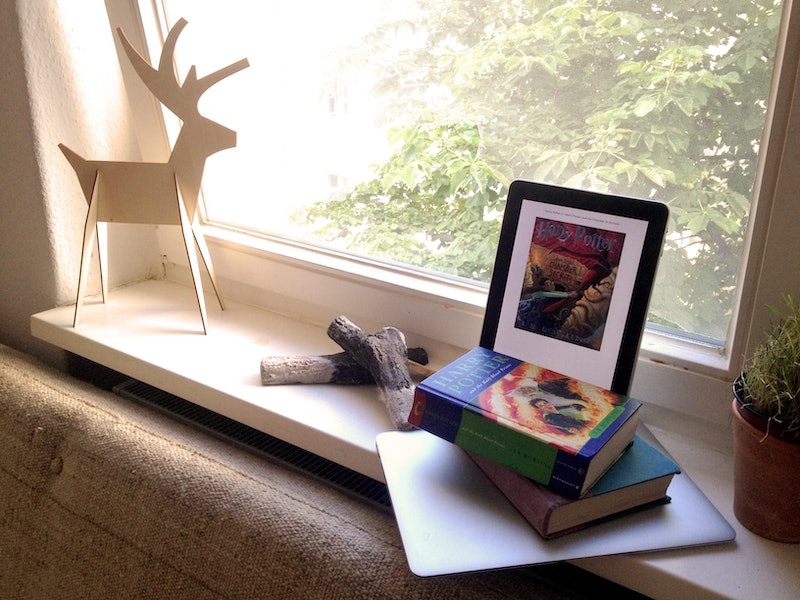 It was early evening on a winter weekday, I was on my way home from soccer practice in the front seat of the minivan with my mother, and I was not at all impressed. My mother, on the other hand (in her infinite wisdom), put Harry Potter on her own personal Christmas list, and come December 25, I found myself high on chocolate Santas, snowed in, and utterly without entertainment save for the recently unwrapped J.K. Rowling novel under the tree. I picked up the book, cracked the spine, and the rest is history — I have been a Harry Potter addict ever since.

I have read the Potter series so often that I have a good portion of the books committed to memory, and I frequently turn back to my favorite passages when I'm in need of comfort, inspiration, or encouragement. Just this past week, as I was putting off work on a major assignment, conveniently "forgetting" to go to yoga for the second time in a row, and settling in with Potter on the train home from work instead of catching up on my course reading for next week, it occurred to me: Harry Potter is not just a source of emotional sustenance, but rather he is a force for good in this world, and if I could follow the Potter example, I might actually live a better life.

My own Harry Potter Challenge. For one week, I would make every decision based on one simple question: What would Harry do?

Despite a few awkward missteps and some shocking letdowns, the results were simply magical.

After a sun-drenched weekend of sightseeing with houseguests, I found myself back in my apartment, thumbing through Instagram and assiduously ignoring all of the work piling up for the week ahead. Resolute in my determination to follow Potter's every example, I realized my indecision about how to spend the remaining weekend hours was the perfect time to begin the Harry Potter Challenge, so I quickly gathered all 7 volumes in front of me, whipped out my planner, and pulled up Netflix on the screen in front of me.

The decision: whether to settle in for a long day of studying or hole up with Sense8 (my latest Netflix obsession) and let the problems of tomorrow wait until tomorrow. After a brief thumb through Harry Potter and the Goblet of Fire, the choice was clear — even in the face of grave danger and public humiliation, when presented with an opportunity for procrastination, Potter always chooses to postpone the grueling work of actual work in favor of prolonged hours of recreation. Of course, Potter rarely enjoys those stolen moments of exploding snap or wizard chess without the company of Ron Weasley, so I roped my own best friend into the scheme and we settled in for a glorious evening of binge-watching.

Although the stress of letting so much work pile up did lead to a few panicked nightmares involving nudity and in-class presentations, it had been a long time since my partner and I enjoyed an entire day of indulgent recreation in each others company, and I hardly knew how much we needed it before we began. Chock one up for the Harry Potter Challenge, Day 1 was undoubtedly a win.

Monday was one of those days, those terrible, horrible, no good, very bad days when virtually everything went wrong. After leaving the house without my bank card, any money, the charging cable for my computer, and (of course) my keys, I resolutely turned back around (after making it all the way to the school library, starving, grumpy, and ready to put in a few extra hours to make up for all the work I ignored yesterday) and began the journey home again.

On the train, I pondered my options — there was no one at home to let me in, I had no way of shoring up my sanity or calming my rumbling stomach without a penny to my name, and of course it never occurred to me to leave a spare set of keys with a friend in the neighborhood. Thinking back to the Harry Potter Challenge, a dark foreboding crept into the train car — perhaps it was dementors, or perhaps it was simply the realization that the way forward could not be more clear: alohomora. Although I never received a letter inviting me to study at Hogwarts Academy (which I can only imagine was an oversight of some kind), and I had no wand, I was certain that in this very situation Harry Potter would make use of the unlocking charm to calmly and cooly renter the apartment and retrieve everything he needed to go about his day.

So, after a 30 minute train ride and a grueling climb up five flights of stairs I found myself outside of my door, pointing a wooden stick and attempting to charm my way into my apartment. Needless to say, I was foiled by the lock and my lack of charming ability (although my neighbors were thoroughly amused). Day 2 of the Harry Potter Challenge was posing some unusual problems, but I was determined to persevere, as Harry would.

Given that magic was pretty much a no-go, it occurred to me that lock-picking would be the next best thing, so with a trusty bobby pin in hand I sent to work. After 10 minutes and two enquires from my no-longer-amused neighbors, the door remained frustratingly, intransigently, impenetrably locked. I was starting to sense that Harry had let me down. I would love to tell you that at that exact moment, help arrived in the form of a house-elf to solve all of my problems (for the appropriate compensation — I'm with Hermione on that one), but alas, nothing. I resorted to waiting in the stairwell for hours while the dog whined from inside and I re-read my digital copy of Harry Potter and the Prisoner of Azkaban looking for something — anything — that I might have missed.

After ignoring my work in favor of a little much-needed R&R on Sunday, and spending most of Monday trying unsuccessfully to make my way into a locked apartment, Tuesday brought with it a veritable deluge of deadlines, and I quickly found myself drowning in To-Dos.

With a stress headaches coming on and no end in sight, I started to panic. As I thought back to Harry Potter and how he would proceed in this exact situation, inspiration struck — Harry would ask for help. Generally, I'm a do-it-yourself kind of a girl, and I'm loath to rely on others, especially to bail me out of a mess so clearly of my own making, but the dictates of the Potter Challenge are clear and finite. If Harry found himself in a jam he would turn to Hermione, Ron, Hagrid, or the Order of the Phoenix for help, so I hopped on to messages and sent out a few desperate pleas.

The results were immediate and overwhelming. With offers of love, sympathy, and material assistance pouring in from all sides, I actually cried a bit in the stacks before gratefully accepting and getting back down to business. It seems that Potter really knows what he's up to by relying so heavily on loyal comrades — I have never felt closer to my friends than I did while asking for help.

After making it through two hard days of work with a little help from my friends, Wednesday night brought with it the promise of a party — one that I was too exhausted to look forward to. In fact, by the time evening rolled around, I was filled with that special sense of dread reserved only for situations involving small talk.

As I slowly muddled through the preparatory process (wishing resolutely that like Harry I only had one set of dress robes to turn for formal occasions), I began to consider my options in light of the Harry Potter Challenge. Would Potter forgo out of the party with a quick, apologetic text message? Nope. Even after the most trying of quidditch matches, when he was in no mood to celebrate, Harry stayed for at least one round of butterbeers in the common room before sneaking upstairs. Then again, sneaking away after a short appearance seemed like exactly what Harry would do in this situation, so I made my way out, comforted by the notion that after a brief round of how do you dos I could subtly make my exit. Although I would have given my left arm for an invisibility cloak, the strategy did in fact seem to work, and I made my way home at a reasonable hour thanking my lucky stars for Harry's sound guidance.

After several days of studying and an early night in, I should have been prepared for the in-class presentation coming up mid-afternoon, but somehow, despite my best efforts, a coherent and compelling Powerpoint escaped me, and by mid-morning I was starting to have a very bad feeling.

With a lackluster five minutes prepared and no inspiration in sight, I considered what Harry would do. My mind wandered back to Professor Trewlaney's dream journals and the old divination standby: when in doubt, just make it all up. So, I threw caution (and my existing presentation) to the wind, and dashed off a whole new set of slides leaning into my strengths (as I felt certain Harry would have done).

Unfortunately, my professors are significantly more on top of their material than Trewlaney ever was, and winging it did not go nearly as well as I had hoped. After 15 minutes at the front of the class, I got the distinct sensation I could see "Hannah Stinks" badges flashing throughout the crowd, and I began regret choosing a Harry Potter Challenge instead of a Hermione Granger experiment.

On Friday I woke up out of sorts thanks to the rather impressive public failure of my in-class presentation, and after moping around all morning infecting my poor dog, cat, and partner with my bad mood, I turned (rather hesitantly) to the Harry Potter Challenge in choosing my course of action. Without the possibility of a visit to Hargrid's cabin to cheer me up, I considered the one activity that always lifts Harry's spirits — flying. Without a broom of my own, I decided physical exercise was the closest possible alternative, and so I decided to take on my own favorite sport: tennis.

After a few hours with a baseboard, a racket, and a bucket of balls, I returned home flushed, elated, and with a renewed reverence for the wisdom of the great Harry Potter.

The endorphin rush of Friday afternoon cleared away my depression about the disastrous in-class presentation, but even flying could not possibly have prepared me for the unexpected text message that brought news of more houseguests hoping to stay with us on rather short notice. Although I generally relish visits from friends and family, it had been an exceptionally long and rather draining week, and I was somewhat desperate for a little peace, quiet, and preparation over the weekend.

Secretly, I hoped that I could duck out of this particular request with a nod to my exhaustion or the late notice, but, like a lightning-shaped scar on my forehead, the knowledge of what Harry would do burned white hot, and I made the final decision of the Harry Potter Challenge — in the face of the dreaded unknown, I would be brave, I would say yes, and I would accept my mission, just like Harry always did.