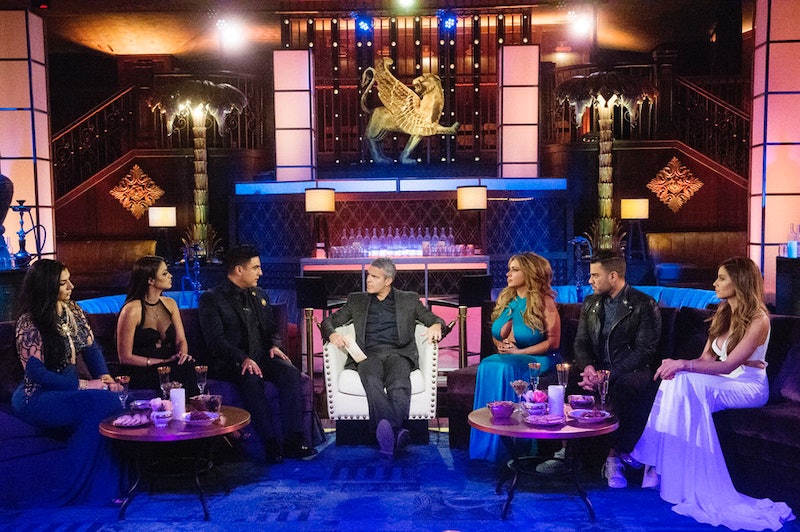 When the fourth season of Shahs of Sunset was delayed because of union disputes and the television season continued on without missing a beat, I wondered if we really needed the Bravo show to come back. But after the season finale and reunion, I've totally changed my mind, because it turns out a lot more was going on than I realized. Now, the probably year-long wait until Shahs of Sunset Season 5 will be nearly unbearable — if the show comes back at all. Bravo didn't announce a fifth season was on the horizon at any point this spring, but Shahs Season 4 wasn't announced until January, so there's time. However, if the show is renewed, the timing of the announcement can affect when it begins filming and what exactly we see when it returns.

Even though there's a chance that Season 4 will be Shahs' last, its explosive ending certainly left fans wanting more. Somehow, even after repeating the same things over and over for the entirety of the season, all of a sudden at the reunion the cast started to hint at far more complicated and interesting backstories between their group of friends. So if there is a Season 5, these things all desperately need to be addressed by the Shahs of Sunset, because I'm so curious what exactly they were talking about. They left so many hanging questions that to lose the chance for another season would be a tragedy. Here are a few loose ends that need to be addressed with another season.

Why Did Reza Shave His Mustache?

Hands down, this was the most absurd thing about Shahs of Sunset Season 4. Reza impulsively shaving his mustache minutes before the reunion prompted startled reactions from everyone on the soundstage. How does one go about growing back a mustache that long? Does it have to go through a wispy phase, or will it look stubbly instead? Will he grow a long beard and then shave the rest of his face? So many unanswered questions.

Why Did MJ Go Blonde?

There were just so many changes this season, and I'm still not used to seeing MJ with blonde hair. Also, I'm dying to hear Vita's opinion on the new look.

A lot of remaining questions revolve around Mike. And that's because his relationship with his new wife Jessica was tested repeatedly, and ultimately drove him away from his friends. Jessica's brief appearance on the reunion proved yep, she still doesn't like the Shahs crew. But does she still like Mike? After these details about potential infidelity come to light, they could be headed towards some very hasty marriage counseling.

He told them to "break up today," but from Asifa's June 14 Instagram shot of them hanging out at a club, it looks like they haven't bit that bullet just yet.

Can We Please Get More Details About Toya The Dog?

What does actual Married to Medicine Toya think??? Toya responded to her namesake on Twitter, but I have no idea what that message means. The idea of MJ training a dog is hilarious, and I would be thrilled to see it. I imagine her apartment will be suffering a lot of damage, and the sight of all of her pillows shredded and furniture bitten is enough to make Shahs of Sunset Season 5 worth it. Hopefully Bravo agrees.

More like this
8 'Selling Sunset' Continuity Errors You Definitely Won't Be Able To Unsee
By Rachel Mantock
Christine Quinn Says She & This Co-Star Got Paid The Most For 'Selling Sunset'
By Grace Wehniainen
'Ghost In The Shell: SAC_2045' Was Only Supposed To Last Two Seasons
By Kadin Burnett
'Selling Sunset's Christine Has Finally Addressed Her Oppenheim Group Exit
By Brad Witter
Get Even More From Bustle — Sign Up For The Newsletter