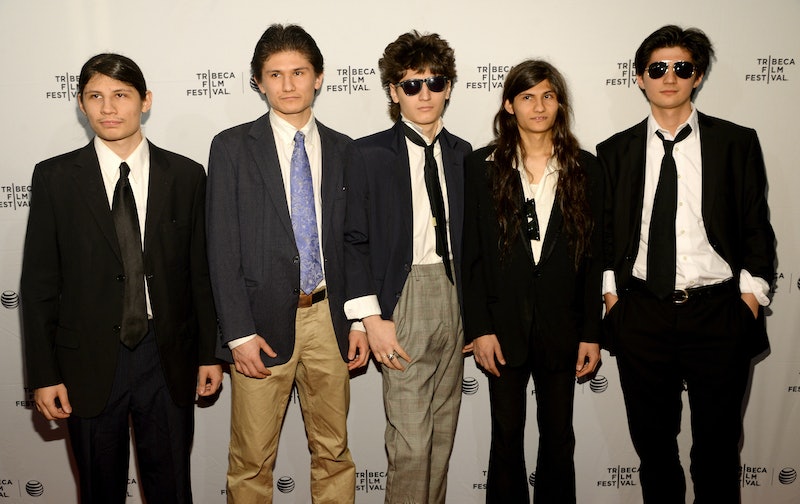 When I got accepted into NYU for my undergraduate degree, my parents were thrilled — and scared to death. They both came of age in wild 1970s Manhattan, so naturally that meant I got daily reminders that New York City can a dangerous and intimidating place. But that's nothing compared to the imprisonment that the boys of The Wolfpack went through. The documentary, out now, follows the Angulo brothers, who were kept locked up in a Lower East Side public housing apartment for years by their paranoid father Oscar. But are The Wolfpack kids still living in that apartment?

Thankfully, that's not the case. Brothers Bhagavan, Govinda, Narayana, Mukunda, Krsna (Glenn), and Jagadisa (Eddie) Angulo, who range in age from 23 to 16, are the subject of the documentary by Crystal Moselle, which won the Grand Jury Prize at the Sundance Film Festival. Back in 2010, one son broke free of his imprisonment — and the the rest followed suit. According to the New York Times, their father Oscar, a Hare Krishna convert, was uber-protective and wanted to make sure to shield his sons from the drugs and crime of NYC, but did so to the extreme — the family, including wife Susanne, was not allowed outside. Oscar occasionally left to get food and provided the family with movies, like The Dark Knight and Reservoir Dogs. Susanne homeschooled the boys.

As the boys reached their teens and twenties, they naturally wanted to break free and experience the real world. Mukunda was the first and slipped outside one day in April 2010, and he wasn't the last. Today, the Angulo boys have actual friends, jobs, their own apartments, girlfriends, haircuts, and a critically lauded movie that is sure to be fascinating. After all, the boys did grow up with a passion for films, which is what Moselle told New York Times helped her bond with them.

The brothers have filmed a movie for Vice (the company is also helping to promote The Wolfpack ) called Mirror Heart and they reviewed this year's summer blockbusters for Wired . According to the New York Post, none of them has plans to attend college and some of them hope to dive right into the entertainment industry. Govinda is an assistant cameraman. Mukunda works as a production assistant and is a member of the New York Public Interest Research Group. Bhagavan is a dancer and a yoga teacher. Youngest teen brothers Jagadisa and Krsna want to be musicians and changed their names to Eddie and Glenn respectively, inspired by pop culture, of course. (Glenn comes from Glenn Frey in A Nightmare On Elm Street and Eddie is from Eddie Money in Eddie and the Cruisers.)

Sounds like these boys aren't wasting their freedom at all. Check out the trailer for The Wolfpack below.