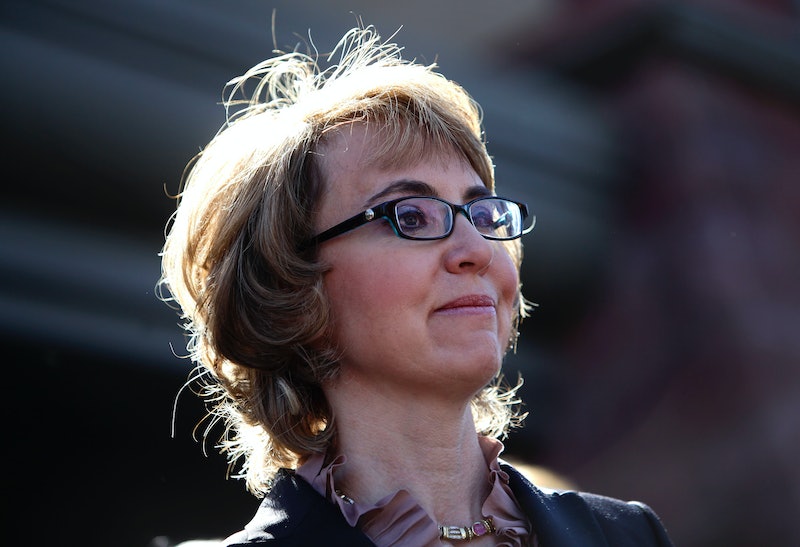 In a very touching gesture by the U.S. Navy, former U.S. Rep. Gabrielle Giffords had a ship christened in her name this weekend, the Associated Press reported. The littoral combat ship, which is designed to operate in shallow coastal waters, was christened at a naval shipyard in Mobile, Alabama, where it was built. Giffords was selected by the Navy to have a ship named for her because of her courage, a Navy spokesman told the AP; she was seriously wounded in a 2011 shooting in Tucson, Arizona. She's since left Congress and started a gun control organization.

"In Congress I was proud to support our armed forces. I love the Navy — I even married a sailor," Giffords told the AP. Her husband, Mark Kelly, is a retired Navy captain and former astronaut.

The choice of Giffords has not been without controversy; when it was first announced in 2012, some Facebook users called the naming process too political, according to The Daily Mail, and said Giffords had not been a strong supporter of the military during her time in office. But Navy Secretary Ray Mabus, who makes the final decision on ships' names, said Giffords was a "very appropriate" choice. She "has inspired the nation with remarkable resiliency and showed the possibilities of the human spirit," he said.

How exactly do Navy ships get named? It's not all that unusual for a member of Congress or a former president to have a ship named for them, though it can raise eyebrows depending on the political situation. It's become less and less unusual for ships to be named for living people. Jimmy Carter has a submarine named for him, for instance, and George H.W. Bush has an aircraft carrier named for him. There are even a few non-Americans for whom the Navy has named ships; former President Clinton stirred up some controversy when he suggested the name for the USS Winston Churchill.

And while it's not that common for Navy ships to be named for women, it's not unheard of. Giffords joins Amelia Earhart, Sally Ride, Susan B. Anthony, Pocahontas, and Sacajawea on the list of women who have had ships christened in their honor.

The Secretary of the Navy makes the final call on what a ship's name should be, and the process by which the Navy chooses ship names is steeped in tradition, but has evolved over time. The type of ship used to determine what kind of name it would receive, with battleships named for states, and destroyers for naval heroes. Submarines used to be named for fish and other "denizens of the deep."

According to the Navy Times, George Washington chose the names of five of the Navy's first frigates, which are war ships, in 1794. They were the Constitution, United States, President, Congress, and Constellation.

But according to the U.S. Naval Institute, the naming conventions, which only became the responsibility of the Secretary of the Navy in 1819, have been less rigid post-World War II. As new types of ships continue to be added to the Navy fleet, it makes sense that naming conventions, have evolved as well.

The USS Gabrielle Giffords, which was sponsored by Jill Biden, celebrates the former congresswoman's courage and resilience, Vice Admiral Philip Cullom, deputy chief of Naval operations for fleet readiness and logistics, said. As she addressed the crowd at the christening, Giffords expressed her gratitude for the recognition and said:

Thank you to all who built this ship. She's stealthy; she will defend freedom around the world.