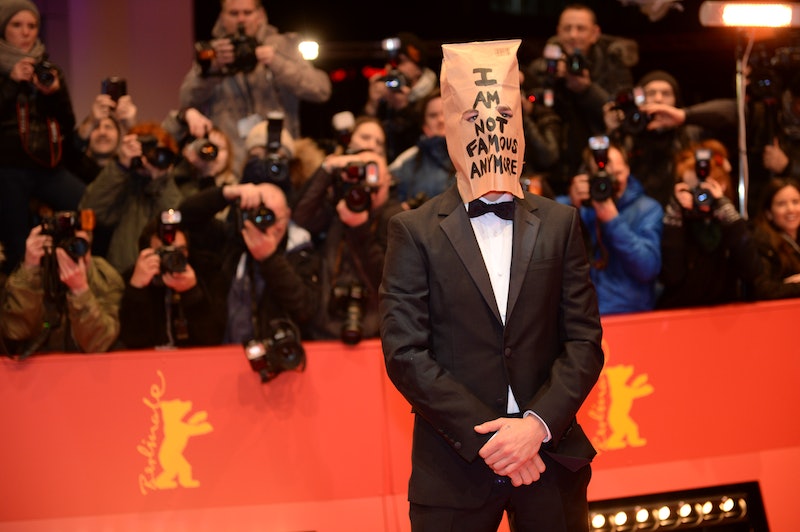 No matter what happens, it'll be hard for me not to look at Shia LaBeouf and not see the pesky, scheming Louis Stevens, the breakout character he played on Disney Channel's hit series Even Stevens. Of course, then the whole world got to know LaBeouf as someone different — the star of Transformers, the "actual cannibal", the guy with the paper bag over his head. The actor has been on quite a journey during the past decade and, in honor of the 15th anniversary of Even Stevens , I think it's time to take a look at the evolution of LaBeouf's career.

The 29-year-old actor actually got his start performing at comedy clubs in Los Angeles — at age 10. Really. According to The Denver Post, all drinks had to be removed when LaBeouf took the stage at those clubs. "I got an agent through the Yellow Pages," he told the newspaper in 2007. "She said, 'Come see me.' She was interested because, usually, you have the parents pimping the kid, rather than the kid pimping himself. So I did my stand-up for her, and about three months later, I got Even Stevens." The beloved Disney Channel comedy series ran from 2000 until 2003 and LaBeouf won a Daytime Emmy for his role as Louis.

But it's been an up-and-down journey since then for the actor. Let's map LaBeouf's evolution since his last lines as Louis Stevens.

This was the actor's first big time starring role on the big screen. Despite its unfortunate title, Holes was critically acclaimed and LaBeouf was suddenly more than just Louis Stevens — he was a star on the rise.

Welcome to the year of Shia. LeBeouf starred in the critically acclaimed Disturbia and the box office smash Transformers, establishing himself as a bonafide star, charming audiences and bringing in the dough. He also hosted Saturday Night Live and starred as Indiana Jones son Mutt in Indiana Jones and the Kingdom of the Crystal Skull and with Michelle Monaghan in Eagle Eye. Shia was everywhere.

Superstardom isn't complete without a stellar companion, and LaBeouf found that in Wall Street: Money Never Sleeps co-star Mulligan. The relationship did much better than the Oliver Stone sequel to Wall Street did, but it ultimately ended in 2010 on good terms. "I still love her," he told Details in 2011. "I think she's a f*cking awesome person and an incredible actress. We're still pals. I wouldn't take any of it back, and I don't think she would either. It just ran its course."

Riding the wave of Optimus Prime's success, LaBeouf starred in two more Transformers movies. In an interview with Details, his loose lips also made a stunning revelation and allegation that he and co-star Meghan Fox hooked up on set.

LaBeouf also got punched in the face during an altercation at Sherman Oaks bar Mad Bull in the Los Angeles area. What a year.

LaBeouf started getting his feet wet in directing, helming some music videos and eventually moving onto making a short film. He released a short named HowardCantour.com and the internet (and Wired ) began to notice its similarities to a comic called Justin M. Damiano by Ghost World creator Daniel Clowes.

LaBeouf eventually tweeted an apology, which was also accused of plagiarism and closely resembling a Yahoo! Answers post. He went on to apologize for it via skywriting.

2014 marked LaBeouf's descent (or ascent?) into performance art. LaBeouf seemed to take the whole plagiarism thing pretty hard and began collaborating on apology performance art with British artist Luke Turner and Finnish performance artist Nastja Säde Rönkkö. Part of this art was LaBeouf's arrival at the red carpet for Lars Von Trier's Nymphomanic wearing the famous paper bag over his head, which states "I Am Not Famous Anymore."

A few days later, the whole thing was turned into a performance art piece in Los Angeles. The gallery piece, called #IAMSORRY, involved LaBeouf sitting in a tuxedo and crying. Attendees lined up to see him cry and take in props, which included a box of hateful tweets.

Months later, LaBeouf alleged that a woman "stripped [his] clothing and proceeded to rape [him]" during the exhibit. Time and The Guardian also noted #IAMSORRY has a striking resemblance to Marina Abramović's The Artist is Present.

This year, LaBeouf appeared in the music video for Sia's hit song, doing interpretive dance with Maddie Ziegler, who confessed that he kinda smelled bad during production.

Sia also received some backlash against the video, which she addressed on Twitter. "I anticipated some 'pedophilia!!!' cries for this video," she tweeted. "All I can say is Maddie and Shia are two of the only actors I felt could play these two warring 'Sia' self states."